The New Zealand cricket team is playing down suggestions in the media that Australia was guilty of unsportsmanlike conduct during the team's seven wicket win in the World Cup final. 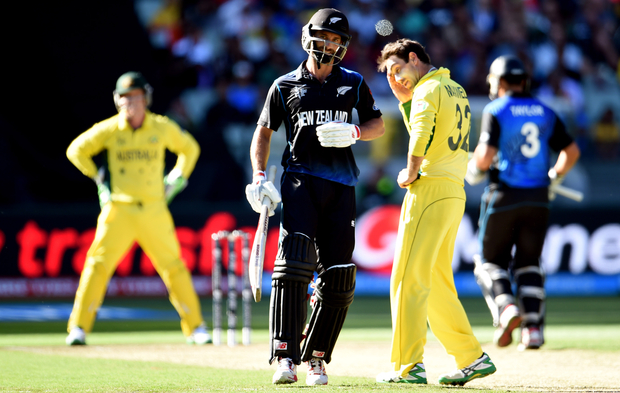 Grant Elliott makes his 50 in the final of the Cricket World Cup against Australia. Photo: PHOTOSPORT

Black Caps coach Mike Hesson said his players took pride in their behaviour and New Zealand had to take its defeat on the chin.

"Different teams play the game different ways, we're pretty proud of the way we go about things," he said.

"Other teams do it slightly differently. But Australia were too good for us yesterday."

New Zealand all rounder Grant Elliott said a verbal exchange he had with Australian players during the final was friendly banter.

Elliott appeared to be abused by several players after he was dismissed for 83 during New Zealand's seven wicket loss to Australia in Melbourne.

Elliott said he enjoyed his time in the middle.

"You know, what goes on the field, stays on the field. It's just good to hear how well the Aussies rated me as a player - but, no, it was just friendly banter out there."

Elliott said his teammates could celebrate the way they had conducted themselves throughout the tournament.