Grant Elliott is the toast of the nation this morning after launching the Black Caps into their first Cricket World Cup final. 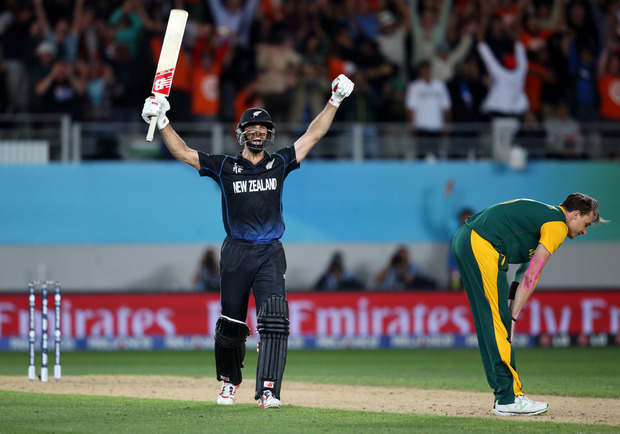 Grant Elliot celebrates the dramatic win. "I really did feel the pressure," he said after the match. Photo: AFP

The dramatic win broke the jinx that had seen the New Zealand team lose six previous world cup semi-finals. The Black Caps will now play the winner of the tomorrow's second semi-final in Sydney between Australia and India.

Set 298 in 43 overs, after South Africa's innings was curtailed by rain New Zealand got off to a rollicking start with skipper Brendon McCullum making 59 off 26 balls to have the Black Caps 71-1 after six overs.

But at 149 for four the match was in the balance.

Corey Anderson, who scored 58, and Elliott combined for a 103-run fifth wicket partnership to bring New Zealand to the brink of victory.

Elliott said he tried to remain detached throughout his innings, but it was difficult, especially in the closing stages.

"I really did feel the pressure, I had two balls and Dan (Vettori) said we weren't going to run to the keeper again so I knew it was up to me," he said.

"I knew that four runs would do it, because a tie was as good as a win, so that was always in the back of my mind, but the chase, we probably left it a bit late.

"It was stressful towards the end there."

Elliott said he has found the support the team has had from people around the country overwhelming.

"For the fans and the four million people in New Zealand, that win's for them, the support has been overwhelming and there's been a lot of talk about us just making the semis and never quite kicking on. 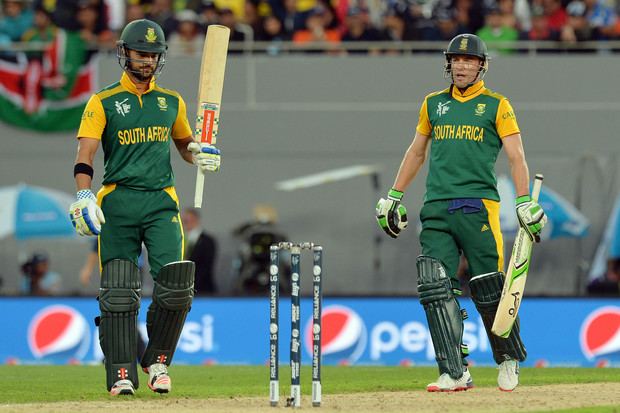 South Africa captain AB de Villiers was overwhelmed too, for very different reasons, and struggled to hold back the tears. He said it was the worst he'd felt on a cricket pitch.

"It's difficult to say what kind of emotions I'm feeling, it's obviously painful," he said after the match.

"Lots of people back home supporting us, it hurts to think of them, we so badly wanted to take that trophy back home but I guess life moves on, the sun will come up tomorrow."

Playing in Sunday's final in Melbourne has come at a cost for Grant Elliott though.

"My sister's got a wedding on Friday so unfortunately I'll miss her wedding, so if you can put that in the press and say I'm sorry," Elliott joked.

"I saw her earlier, she was pretty happy for me, but I'm going to have to give her a special gift I think."

Surely an ideal wedding present would be a world cup trophy?