The government has announced details of its Covid-19 Protection Framework, involving the roll-out of a 'traffic-light' system once all DHBs hit 90 percent full vaccination rates.

A vaccine certificate will be central to the new framework.

The system will involve three settings - green, orange and red.

"If you want to be guaranteed that no matter the setting that we are in, that you can go to bars, restaurants and close-proximity businesses like a hairdresser, then you will need to be vaccinated," Prime Minister Jacinda Ardern told media this morning.

She was accompanied by Deputy Prime Minister Grant Robertson, Covid-19 Response Minister Chris Hipkins and Associate Health Minister Peeni Henare as the government also announced enhanced financial support for businesses and those families struggling under restrictions, and a new $120 million fund to boost Māori vaccination rates and protection of communities.

Ardern said the vaccination certificates would allow businesses to be able to open and operate at any level.

If cases start to climb in areas with lower vaccination rates in lower-income communities, much more highly targeted and localised lockdowns can be used if needed, she said.

The red setting will allow hospitality to open with vaccine certificates, but gathering limits and physical distancing, masks and other public health measures will be used.

"This will still feel like a huge amount of freedom relative to what Auckland has now," Ardern said.

Auckland will move into red as soon as the Auckland DHBs hit the 90 percent vaccination target, rather than wait for the rest of the country. At current rates, Auckland would absolutely move before Christmas, she added when questioned by media.

"This is within Auckland's grasp and we will be throwing every resource we can to support them," she said. 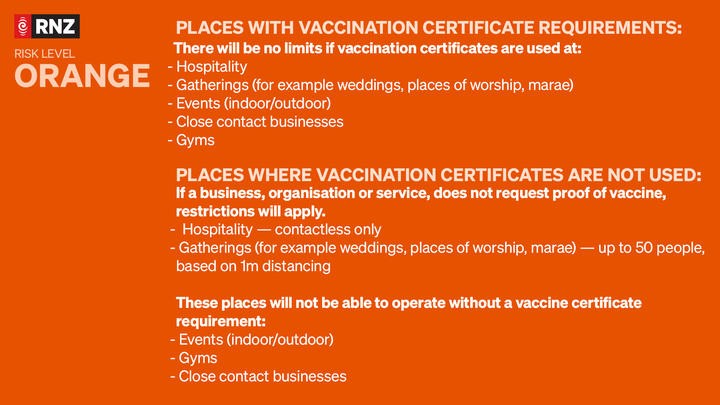 The rest of the country will move all at the same time to "orange" when all DHBs around the country reach the 90 percent target.

At orange, gathering limits can lift. Places that choose not to use vaccination certificates will either be closed or have public health measures in place.

Green is when there are some Covid-19 cases in the community but at low levels. Fully vaccinated people can enjoy all events and hospitality and gatherings by showing a vaccine certificate.

Premises choosing not to use certificates will face restrictions similar to the current alert level framework. 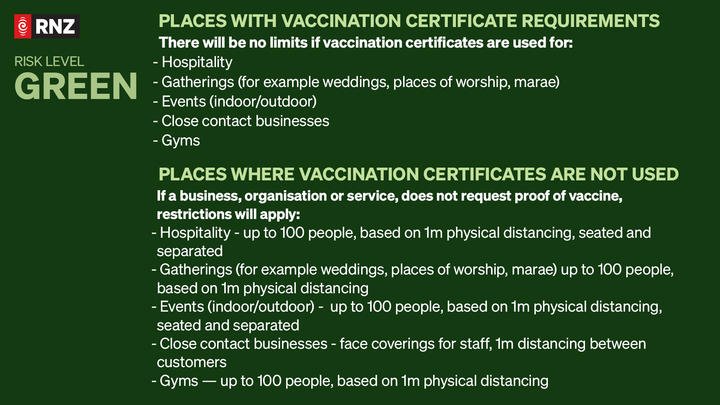 Ardern said the reason for changing from the current alert level system was because the country needed a system that made use of the new tool of vaccines and vaccine certificates.

Ardern emphasised Covid-19 cases in the community would rise.

"But because we won't take this step until we are at 90 percent vaccination, we will also have higher levels of protection that limit Covid's impact," she added.

If any member of the public was not vaccinated, there would be things they will miss out on and people who wanted to get out and enjoy summer should do so, the PM warned.

Detail would be progressively added to the system as time goes on. The country will move all at the same time to "orange" when all DHBs around the country reach the 90 percent target.

Ardern said the focus on elimination had kept New Zealand free from Covid-19 for much of the past 18 months when the population was vulnerable.

"We can rightfully be proud of what our world-leading response has achieved, but two things have changed since then," she said.

"The first is that Delta has made it very hard to maintain our elimination strategy ... but as our long-standing strategy was challenged we also had a new tool.

"That tool is the vaccine. The vaccine we are using in New Zealand is safe and effective ... it also helps protect everyone. The more people who are vaccinated, the harder it is for Covid to spread through communities quickly.

"Protection means that we won't just treat Covid like a seasonal illness, we will protect people from it with vaccination, management, and a response that focuses on minimising the health impacts."

The enhanced support will be paid fortnightly until Auckland has been able to move into the new protection framework.

The wage subsidy will continue to be available on the current criteria while areas of the country are still in alert level 3.

A $60 million fund for business advice and mental health support in Auckland was also announced. Businesses will be able to apply for up to $3000 for advice and planning support, and up to $4000 to implement that advice.

There will also be support for low-income households.

From 1 November income limits for assistance will rise to 40 hours at the minimum wage, or $800 per week and $1600 per week for a couple with or without children.

But said he was acutely aware of the impact of restrictions on businesses.

Robertson said Cabinet had also made, in principle, decisions on assistance provided under the new traffic-light framework. He will be taking a paper to Cabinet in November proposing a transition grant for Auckland businesses based on a similar criteria to the current Resurgence Support Payment.

Once it is fully operational across New Zealand, the current support schemes will be replaced by something that will better reflect the new framework, he said.

One of the things being considered is how businesses not using vaccine certificates will be treated, particularly in the red level.

Robertson said he thought payment would not be made available to any businesses that should be using a vaccine certificate but choose not to. However, this required more thinking and work on the part of government.

There would also be ongoing support for people who need to isolate and be tested.

"Delta has tested us all, and I know that we have asked a lot of people as we have fought this outbreak ... we are almost there and to reiterate the words of the prime minister, please get vaccinated," he said.

Henare said the ongoing support was what was required to boost Māori vaccination rates. "While we say 90 percent for Māori and indeed the rest of the population, we will continue to make the vaccine available to continue to lift those numbers," he said.