Auckland secondary schools are preparing for Tuesday's partial reopening of their classes though some principals are questioning the government's decision. 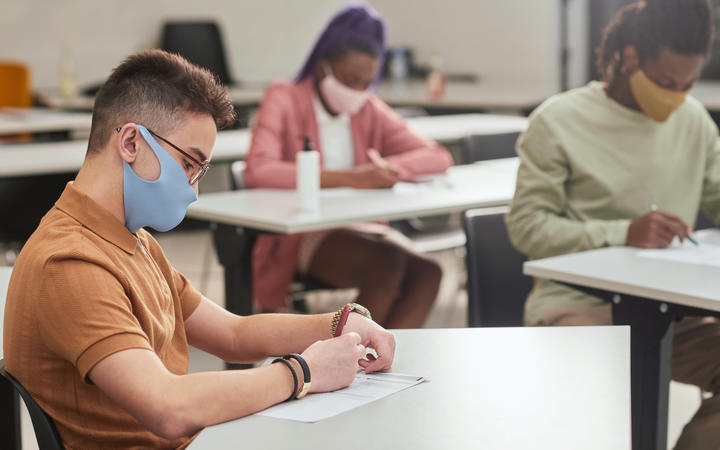 Principals told RNZ they had already double-checked their stocks of hand sanitiser and facemasks and improved classroom ventilation in preparation for an eventual resumption of classes.

They said the biggest job for schools next week would be figuring out which students were behind in their work and helping them catch up.

About 57,000 teenagers in Years 11 to 13 are allowed back in school on 26 October for the first time since the mid-August.

Year 12 student Rosie Risbrook from Whangaparāoa College in the north of Auckland said she was looking forward to it.

"It's been so lonely in lockdown," she said.

"Having no one around you, I hadn't realised it would affect me so much, but it does. The human interaction you're really missing, so I'm really looking forward to going back to school no matter what the conditions, like wearing masks or anything like that," she said.

But she said not all of her friends were quite as keen as she was.

"I have a few friends actually who are very worried about going back to school because they're quite nervous. It's going to be really scary interacting with people again," she said.

Whangaparāoa College principal Steve McCracken said some teachers were a bit nervous too.

"There's a bit of apprehension amongst our staff," he said.

"We're just reassuring them that the government's taken the best possible advice."

McCracken said the school had been expecting to reopen at some point so it was well-prepared for the return of up to 800 students on Tuesday.

He said it was important teenagers could get back to class and recover their motivation for study.

Albany Senior High School principal Claire Amos said her school was trying to reopen in a way that ensured everyone felt safe. It allowed those who were studying effectively at home to stay there if they wanted to.

"We're sending out surveys this afternoon to our parents and our students to try and get a sense of how many need to and want to come back into school. We're also working to reassure our teachers and make sure they understand the requirements about testing, making sure they are still following up on getting the vaccination records in to us. It is crazy."

Amos said she hoped the government was not reopening Auckland's schools simply to ensure NCEA and Scholarship exams could go ahead in November.

"I worry that the reason we've been asked to do this is because of pressure and perceptions around the importance of exams."

'I struggle to see the logic of the decision'

Ōtāhuhu College principal Neil Watson said meeting the various public health requirements ahead of next week was not a problem but he could not understand the government's thinking.

"I struggle to see the logic of the decision. Students can go to school, but students can't go into a shop. You can be in a classroom with 30 students in a school environment with over 1000 students but you can't go and get a haircut," he said.

Watson said some families would be reluctant to send children back to school under alert level 3 and he was expecting only about half of the school's 742 eligible students would turn up.

He said for those who did come back to class the first order of business would be figuring out where they were at with their learning.

"There's a lot of work I know talking to teachers over this whole lockdown period in how do we develop our programmes and adjust them to meet the needs of the kids. We know some of our senior students are working at the moment to support their families because their parents' hours have been cut so there's a whole lot of complicating factors that we'll have to work in."

It said according to public health advice the risk of students and teachers catching Covid-19 in schools would be low.