It was a far cry from the wild scenes of last weekend. Instead of corralling large crowds, the police horses today munched on grass in Sydney's Hyde Park. 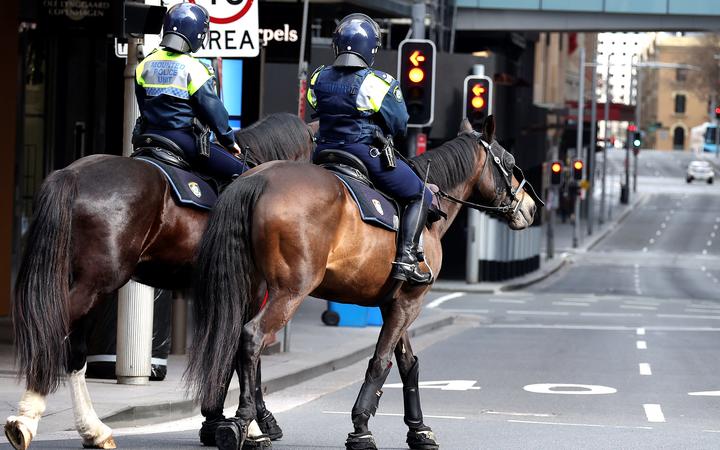 Police on horses patrol the central business district of Sydney on Saturday, as authorities warned against the anti-lockdown protest. Photo: AFP

After last weekend's anti-lockdown protests saw thousands of people descend on the city centre, fears of a repeat fizzled this afternoon.

By 1pm Sydney time, the ABC had been unable to identify a single demonstrator at several central locations.

Sydneysiders had been warned for days there would be a large police presence in the city.

An exclusion zone was set up around the city centre until 3pm, with roadblocks preventing access from main roads.

Large groups of police strolled the streets as a helicopter swooped over Darling Harbour this morning, where there were plenty of socially-distanced exercisers, but no demonstrators. 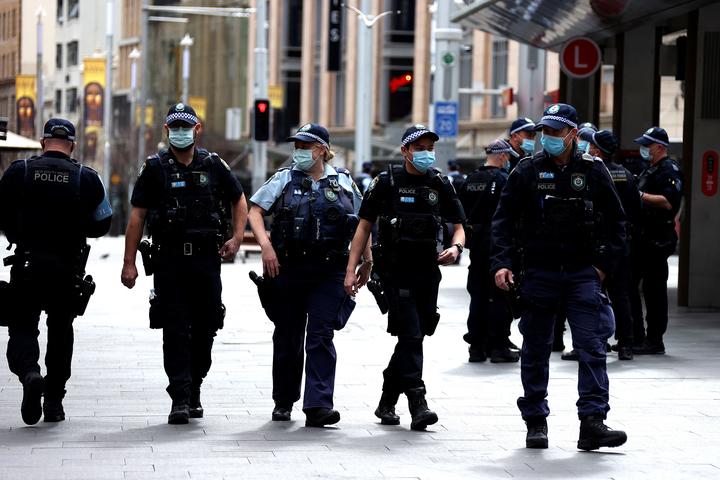 Sydney police warned officers would be out in force in the city centre today, in case of any disruption or protests, but all was quiet. Photo: AFP

Taxis and ride-sharing services were banned from picking up or dropping people off in the exclusion zone unless they were transporting someone for a medical emergency, or an essential worker.

Police also swarmed suburban train stations in an effort to stop people from heading into the city, with any protesters facing fines of up to Aus$100,000.

Dozens of officers from the riot squad and mounted police unit were at Hyde Park and Town Hall where last weekend's demonstration escalated.

While people were allowed to walk through the iconic lawns, large groups were stopped and asked where they are going as a precaution.

Officers from the dog squad were scouring the perimeter and Tobruk, the police horse that was attacked by a demonstrator last weekend, has also been patrolling the area.

A woman who didn't want to be identified said she was pleased to see a large police presence.

"It's really great to see officers keeping the city safe - we all need to stay home and get this virus under control," she said.

"Now is not the time to protest when people are dying from the Delta strain.

"I just want life to go back to normal and protesting will only cause the virus to spread." 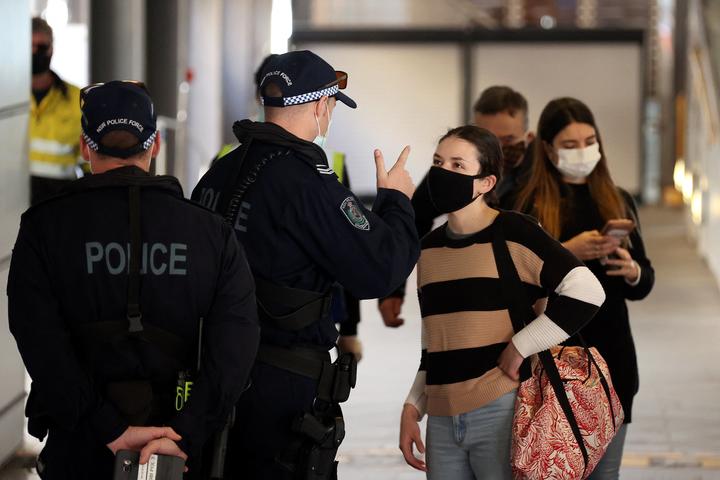 A police officer talks to a passenger outside the Manly wharf ferry terminal in Sydney on Saturday. Road blocks were in place to stop most people entering the city centre. Photo: AFP

Anti-lockdown groups on Telegram, which the ABC has chosen not to name, said none of its known organisers had any plans for a Saturday protest.

The ABC found last week's rally were spearheaded by a German-based conspiracy group who also organised similar marches in Melbourne and Queensland.

Messaging, including graphics and instructions for protesters, was then picked up by local anti-vaccination and anti-lockdown groups in NSW.

The same German group organised worldwide "freedom" rallies in May but made no official posts about any planned protests today.

Earlier this week police warned anyone planning to protest today they would be arrested and prosecuted.

NSW Police have so far charged 85 people and issued over 300 personal infringement notices to those who attended last week's unauthorised protest.

Last night a 49-year-old man from the Central Coast was charged with criminal offences relating to the incitement of the protest.