Anyone organising or planning to attend a second Covid-19 lockdown protest in Sydney has been warned, "you will be arrested". 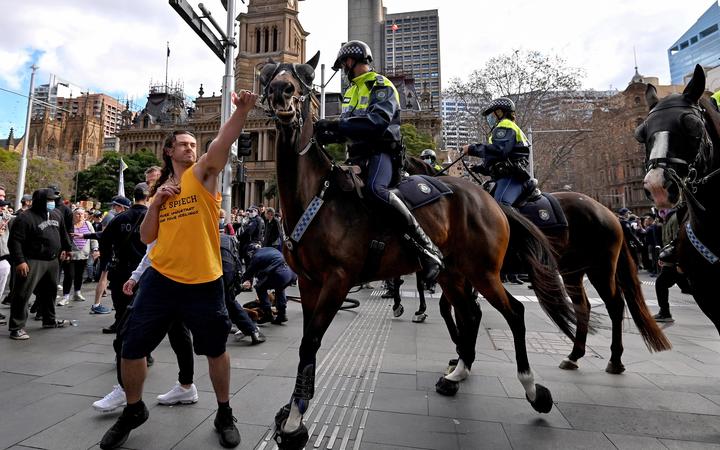 A protester (left) tries to push away a police horse in Sydney, as thousands of people gathered to demonstrate against the city's month-long stay-at-home orders. Photo: AFP / Steven Saphore

Police Commissioner Mick Fuller revealed authorities had received upwards of 10,000 tip-offs since Saturday when thousands of people marched through Sydney's CBD to demonstrate against the state's lockdown conditions.

More than 57 people have been charged for attending the protests and many more fines and charges are expected to be laid as officers trawl through hours of footage to identify more protesters.

NSW police said there were still murmurs about a second protest planned for this Saturday despite social media pages and accounts that facilitated the weekend protests being shut down.

"Can I just put this warning out now to everyone? We will be heavily policing that event," Commissioner Fuller said.

"We will take the ground very early. You will be arrested and prosecuted. 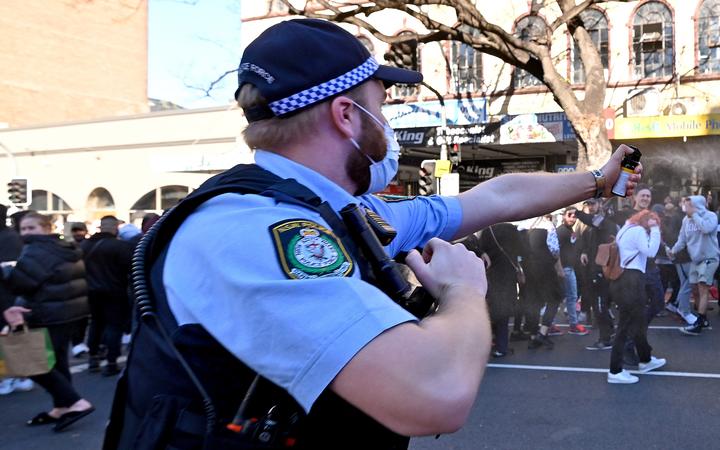 A police officer uses a spray to try and disperse protesters during the rally in Sydney last Saturday. Photo: AFP

Commissioner Fuller said police had no legal recourse to prevent a second gathering but would be prepared to respond in force.

"There are no organisers that we can take to the Supreme Court to stop the protests happening, which means they're a bunch of anarchists," he said.

"In terms of the police response, it will be significant, on Saturday if it is planned to go ahead."

Officers issued more than 90 infringement notices to people at the demonstration for breaching public health orders at the weekend.

"What we saw today was 3500 very selfish boofheads - people that thought the law didn't apply to them," NSW Police Minister David Elliott said on Saturday.

Central Sydney was shut down for several hours as thousands of protesters breached Covid-19 restrictions to march, sparking brawls and several arrests. 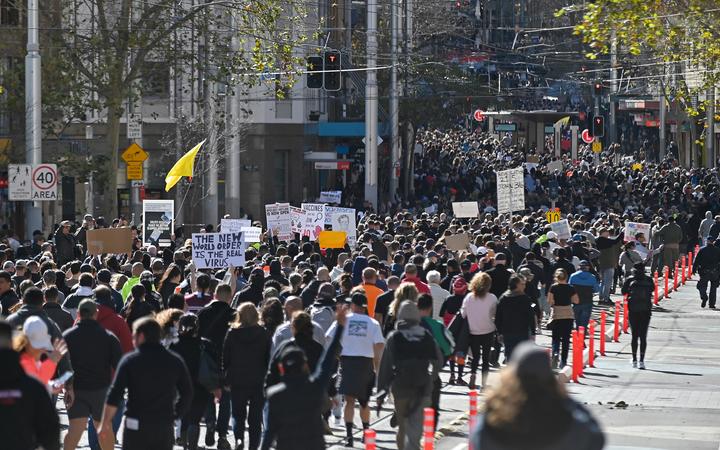 Protesters make their way through the Sydney CBD. Photo: AFP

People in Greater Sydney and its surrounds have been living in lockdown for over four weeks, as an outbreak of the Delta coronavirus variant continues to spread.

Members of the public have already started to send police social media footage from the event, some of which identifies individuals committing offences. Police said officers would "forensically investigate" CCTV feeds.

Elliott has warned protesters, particularly the ringleaders, to expect a call from police. He also urged them to get tested for Covid-19.

"There is no doubt in my mind that at least one individual there today had Covid, it is statistically impossible for us not to consider that," Elliott said.