The places masks are required are being expanded for England, Northern Ireland, Scotland and Paris, following a recent spike in coronavirus cases. 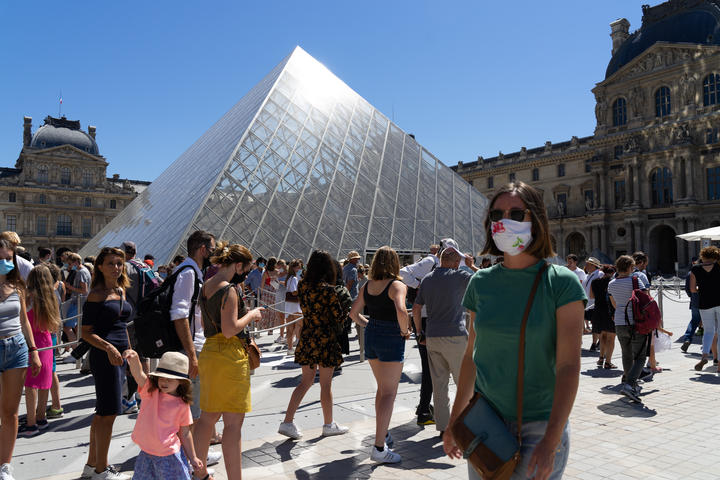 Masks will become compulsory in all public enclosed spaces in Northern Ireland from Monday.

The new rules come after new quarantine rules for travellers to the UK took effect on Saturday. Anyone now arriving in England, Scotland or Northern Ireland from Belgium, Andorra and the Bahamas will have to quarantine for two weeks.

Stricter lockdown measures are also in place in east Lancashire, the city of Preston, Greater Manchester and parts of west Yorkshire. The number of cases in Preston has jumped sharply in the past week, and almost half are among people aged 30 and under.

Residents there are facing stricter restrictions, which include banning separate households from meeting each other at home.

Wearing a face mask will be compulsory in busy parts of Paris from Monday amid a rise in coronavirus infections in and around the French capital.

Police said the order would apply to people aged 11 and over in "certain very crowded zones" that are still to be announced.

The virus had been circulating more widely in the region since mid-July, they said. Face masks are already compulsory in enclosed public spaces.

Experts have warned that France could lose control of Covid-19 "at any time".

Several cities, such as Nice and Lille, have introduced their own additional orders making mask-wearing mandatory in certain outdoor areas.

In a statement on Saturday, authorities said the rate of positive coronavirus tests was 2.4 percent in the wider Paris area, compared to the national average of 1.6 percent.

They added that 400 people were testing positive for coronavirus every day in the region, with those aged between 20 and 30 particularly affected.

France reported 2,288 new coronavirus infections in its daily figures on Friday, marking a new post-lockdown high. The country has recorded more than 235,000 cases of Covid-19 and more than 30,000 deaths, according to data from Johns Hopkins University. 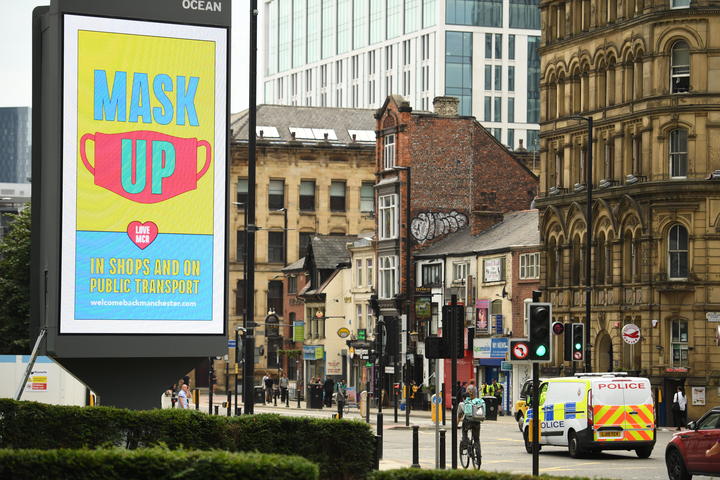 A large electronic billboard displays a message urging people to wear masks to reduce the spread of the Covid-19 virus. Photo: AFP

'New normal' for the UK

The UK Prime Minister Boris Johnson announced the new mask rules for England last week and delayed easing the lockdown, because of the spike in virus cases.

Those who break the masks laws in England face fines of up to £100 (almost NZ $200), with the PM saying there would be a "greater police presence" to ensure the rules were being followed.

Scotland's First Minister, Nicola Sturgeon, announced the new face mask rules, along with other measures, on Friday, explaining that the "risks are heightened" as the country eases lockdown restrictions.

In Wales and Northern Ireland it's currently only compulsory to wear a face covering on public transport.

Who has to, and where in the UK?

Toby Bradon, general manager for Vue cinemas in the UK, Ireland and Denmark, said wearing face coverings had become "the new normal", but customers would be able to remove their masks to eat and drink in its cinemas.

He added: "We recognise that some people will be exempt, so it's appropriate that we encourage people to wear them, but we won't be policing it."

London's Science Museum said while customers would be required to wear face masks in line with government guidance when it reopens on 19 August, it hoped visitors would be "respectful" of those who were exempt from doing so.

Children under 11 are exempt from having to wear face coverings in the UK, as are those with a physical or mental illness or impairment or disability and employees in indoor settings.

People are allowed to remove masks if asked to in a bank for identification or to receive treatment or services, such as a haircut, and they don't have to wear them at restaurants, bars and pubs with table service. 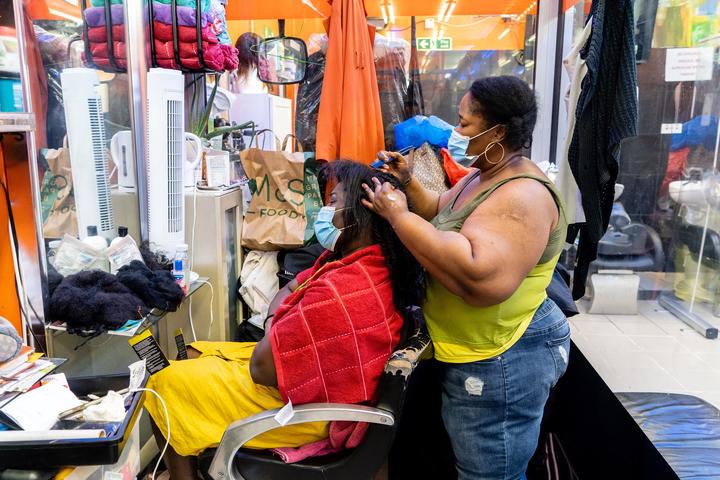 A hairdresser wearing a mask in a Peckham beauty salon, London. Photo: AFP

UK schools minister Nick Gibb told the BBC pupils over 11 years old will be expected to wear masks. But he reiterated they won't be necessary in classrooms as "there are a whole raft of other measures we've introduced in schools to make sure we minimise the risk of transmission".

"The advice we've had about wearing masks in school is if they're not competently handled you can actually increase the risk of spreading the virus," he said.

In Scotland rules have been tightened for the hospitality sector. From Friday 14 August pubs and venues must record customers' contact details, and tables should be pre-booked and there should be no queues.

On Saturday the UK reported a further 55 people had died with the virus, taking the total to 46,566. And another 758 people have tested positive for Covid-19 in the past 24 hours.

On Friday, the latest UK reproduction number (R number) was estimated to be between 0.8 and 1. However, the government's Scientific Advisory Group for Emergencies said it did "not have confidence" that the R number in England was below one.

The R number is the average number of people that one infected person will pass the virus on to; a value above 1 means cases are growing exponentially, whereas if the number is less than 1 the disease will eventually peter out.

The Office for National Statistics said latest data suggests the number of people testing positive for coronavirus may be levelling off in England.