There are now 16 cases of Covid-19 linked to the Ruby Princess cruise ship's visit to Napier three weeks ago. 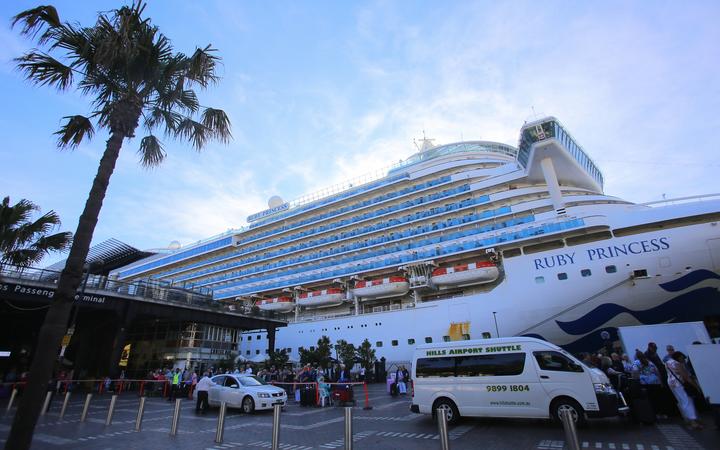 Three more people with links to the cruise ship have tested positive or are probable cases in the last 24-hours, Hawke's Bay District Health Board said.

One of the probable cases was a resident at Gladys Mary Care Home in Napier, which already had three confirmed and two other probable cases.

The first resident become infected after being visited by a relative who been in contact with passengers from the Ruby Princess while they docked in Napier on 15 March.

Yesterday the Ministry of Health said cases linked to the Ruby Princess cruise ship in Hawke's Bay made it one of ten clusters nationwide.

Prior to the ship being granted clearance to disembark in Napier, Covid-19 was ruled out on unwell passengers, Hawke's Bay Medical Officer of Health Nick Jones said.

"The ship declared it had several passengers unwell with Influenza A (confirmed through the ship's onboard testing), but one passenger that did not return an Influenza A result.

"Therefore, the ship's Master was advised that if Covid-19 could not be excluded, the vessel would not be granted clearance to disembark in Napier," said Dr Jones.

"At the request of the ship's doctor, the Medical Officer of Health arranged for immediate Covid-19 testing to be undertaken by public health officials while the ship was still in Wellington, and all returned negative results."

Jones said the Medical Officer of Health was also advised by government officials that the new border closure introduced at that time did not apply to vessels already within New Zealand waters.

"The ship was therefore cleared for disembarkation in Napier, but unwell passengers were to remain on board the vessel," he said.

There were now 29 Covid-19 cases in Hawke's Bay, after five new cases were reported in the last 24 hours.

In Australia, seven deaths and more than 600 coronavirus cases have come from the Ruby Princess, which visited Sydney in March despite health officials knowing of the risk of Covid-19 aboard the ship.

"Each of the staff of the chief health officer made the decision to the best of their ability," Hazzard told reporters in televised briefing.

"And those people are experts in their fields." Cruise ships are responsible for at around 20 percent of Australia's coronavirus cases and several remain floating in waters off the coast after being refused entry to ports.