From a reverend hosting an online dance rave in his office, to more than 100 farming mums around rural New Zealand agreeing to don their wedding gowns and toast each other online - these are just some of the creative ways kiwis managed to cope through their first week of lockdown.

There were livestreamed Covid-19 parody pump classes - for all the New Zealanders missing their gym classes, and a Gisborne woman who found her answer to the lack of personal protective equipment - or PPE - a full-blown unicorn suit, covering her from head to toe.

Here are some of the things Kiwis did to keep themselves and others smiling.

Jack Buchanan is in lockdown with his parents and sister, so figured why not make a music video? The result is a hilarious video entitled Family Lockdown Boogie, that's been viewed more than 200,000 times on his Facebook page in less than 24 hours.

Also getting his groove on is Reverend Frank Ritchie, who decided shortly after lockdown began to throw his inhibitions out the window and have some "unadulterated fun".

"I was listening to a radio station that was playing some music and I was dancing in my office. And I thought, you know what? A guy in a clerical collar dancing around his office is probably going to put a smile on peoples' faces.

"So I just thought I'd throw shame out the window and record myself doing it and put it online."

So, dressed in his formal religious attire - clerical collar and all - he pressed record on his phone, invited others to dance along with him, and then began raving to techno music in his home office.

The rare sight of a reverend dance-raving shocked and delighted many.

That video now has thousands of views, and has been posted on several other platforms.

Many others have jumped in and responded with their own dancing videos, including other church ministers on lockdown overseas.

"You would normally expect someone like me to be a reasonably serious guy. Try and offer wisdom, some spiritual encouragement in the world. So to see me dancing and look a little unco as I do it was a good bit of humour for people," he said.

"Because I put it out as a vicar dance-off...I've had a couple of minister colleagues in the United States do it. And they look terrible. I've had a good laugh at them!"

He wasn't the only one laughing.

Anyone who was lamenting over their cancelled gym classes could join in on a Covid-19 spin or pump class online run by former Mr Australia and Mr New Zealand Champion Bodybuilder Marc Rainbow.

Dressed in his fiance Jo Stewart's black leotard, he brought entertainment to many who have been improvising on their exercise regime at home.

"I've done a couple of videos. I did a Covid-19 pump class and a Covid-19 spin class," explained Rainbow who has a reputation with his clients for being a comedian.

The couple run their own personal training and nutrition businesses and are among many business owners heavily impacted by the lockdown.

But that hasn't stopped them from wanting to inspire others. 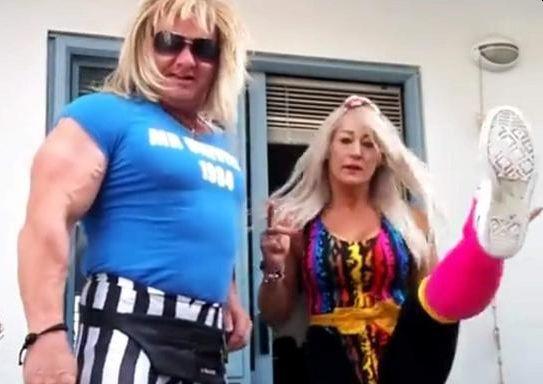 "We don't plan what time it just depends when the urge takes us and how we're feeling.Stewart, a world champion bodybuilder, said she was glad to see others getting a laugh out of their videos while on lockdown."Jo's the director, producer, boom operator, editor. I'm just the actor. We decided we'd do something just a little bit different to try and keep peoples' spirits up within the fitness industry."

"So today when he did his spin class, I decided to grab a long bodysuit that I had out of the dresser. Got him to try it on and it was all on!"

Rainbow said it took a while to get into - "but it actually took a lot longer to get out of it!"

If exercise isn't your thing during lockdown, perhaps putting on your wedding dress and having a glass of wine will get you smiling.

More than 100 farming mums around the country put on their wedding dresses on Wednesday - and shared their photos online, toasting each other for surviving week one of lockdown. 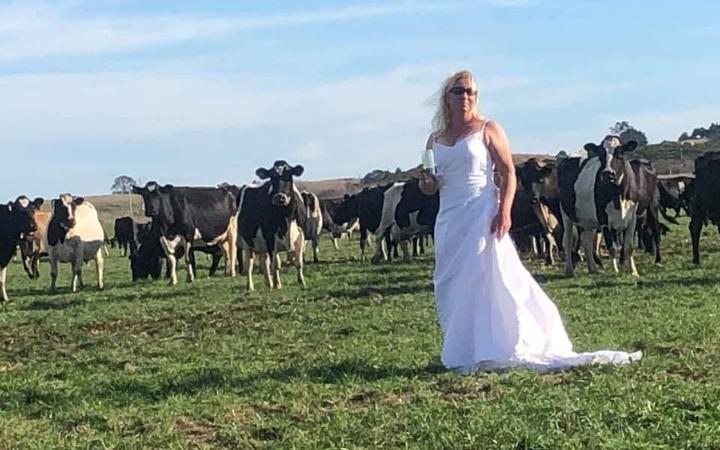 Kate Maisey in her wedding gown with a glass of bourbon and a whole lot of cows Photo: SUPPLIED

Jamie Mckenzie from Otorohanga suggested the idea on a Facebook post as a light-hearted way to get through the stress of a lockdown.

"It was more just because we're all at home and we've got no excuse at the moment. And we've got plenty of time on our hands, why not?"

The post received a huge response with almost 150 comments, including from one woman who said she'd drive her tractor in a ball gown.

Mckenzie said it was a great way for many of the farming mums in rural communities to support each other.

"It really is the unknown. No one knows what to do. People are scared to go to the supermarket. Everyone's stuck at home.

"We need to fill our days with positivity and try and laugh about things and make the most of it and I just thought 'ok ladies, let's just put on a dress and have a glass of wine and try and keep our chins up and keep going!'."

But rather than putting on a wedding dress, others had different ideas to keep themselves and their community smiling, such as one Gisborne woman who came up with her own answer to the lack of personal protective equipment, or PPE. 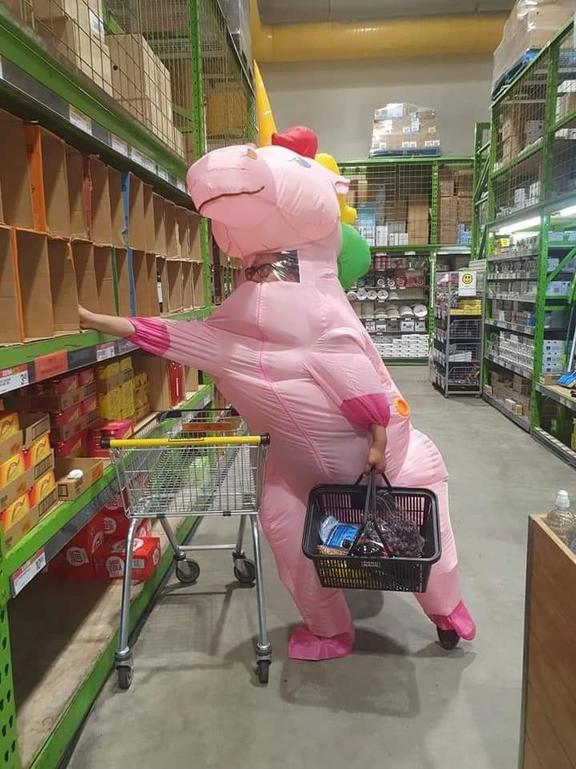 "It covers from head to toe. It comes with gloves but it has to stay inflated the whole time I'm using it. But apart from that, I could probably work at a nuclear power plant.Izzy Terauna did her grocery shopping in an inflated pink unicorn outfit, which she says gives her full protection from Covid-19. Photo: SUPPLIED

"For the suit to stay inflated it has two fans on either side which I have to charge. And then I cover them with clean filters. But as long as it stays in place it's pretty much a hazmat suit."

Her photos have gone viral and have even been reported on by other media around the world.

She calls it Māori ingenuity and it's brought joy to all who've seen her out shopping.

"In a time when we all have to stay home, the response has been amazingly positive but the best thing for me has been the look on kids' faces...actually, and the looks on adults' faces.

As we continue the lockdown, she has one message for New Zealand.

"Spread joy not germs and...find me on TikTok! Woop woop!"