First person - Ben Strang's nana passed away on Sunday, but with the nation going into lockdown his family has to wait four weeks to say goodbye. 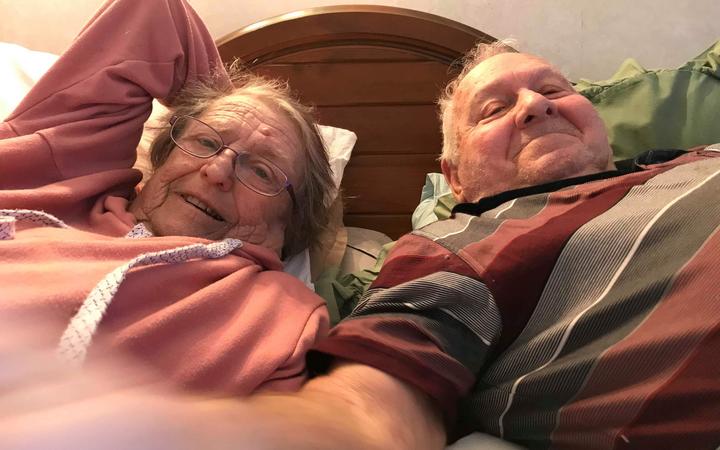 Ben Strang's grandfather Kelvin will have to cope with the loss of Lesley, his wife of 63 years, during the country's unprecedented lockdown. Photo: Supplied

She fought like crazy for months and months, and somehow, always managed to bounce back.

But this time was different.

When I last talked to her about a week ago, she was tired and always uncomfortable.

It wasn't a happy existence, but seeing her children and grandchildren and eventually her cats, Thomas and Ruby, that brought a smile to her face.

Nana had her mind until the end.

We would talk about the Black Caps and the Hurricanes, about the "old people" as she called them at the rest home, and her face lit up when discussing my upcoming wedding.

She was too frail now - her legs barely held her up and she needed a walker or a wheelchair to get about - but there was nothing better than a farewell hug from Nana.

Once her arms were wrapped around you, it was like you were trapped in a vice.

I don't really know how you describe love, but that was it. Unconditional and unlimited.

I'd love to tell her all of this. I'd love to stand up at her funeral and explain just what she meant to me and to all of her grandchildren.

But that won't happen.

Nana's funeral has been cancelled. She won't get a send-off. There will be no celebration. We don't really get to say goodbye.

It was all supposed to happen on Wednesday morning, but with the nation going into lockdown and strict measure being put in place due to the Covid-19 pandemic, it's over before it began.

For my grandad, my mum and her sisters and the wider family, these past few days were always going to be hell.

There is no escaping that.

But now the grief has been compounded.

We're all talking about exponential growth at the moment, and I can tell you what that feels like.

It's a crucial part of the grieving process to say your goodbyes, to laugh and cry as you reminisce about the good times, and the bad.

We can't do that.

The person who will take this the hardest is my grandad.

He's battling dementia, so he often doesn't know where he is or why he's there, but there's one thing he knows full well.

He knows who his wife is.

I've never seen someone love someone as much as grandad loves nana.

At the moment, grandad is in denial.

Yesterday, there was a big smile on his face seeing his daughters and grandchildren in the house with him.

He kept trying to steal my dad's slippers, even thought they're about 12 sizes too big for him.

But he was happy, which is a vast improvement on when I see him in the rest home.

"I'm pretty lonely," he told me the last time I visited, sitting on his single bed which took up almost half his room.

Now how is he going to feel.

He's just lost the love of his life, his wife of 63 years, and now he's expected to stay in his rest home with no visits from family or friends for at least a month.

I worry about grandad more than anything.

I worry about how he takes it all. I worry I won't see him again. I worry he feels like he's been locked in a prison.

But I also know it's the best place for him, somewhere he will be fed and looked after, where the staff are lovely and do their best to engage with him.

In the next month, hundreds, if not thousands of families are going to go through what my family have been through the past few days.

People die. It's a fact of life.

But for the next four weeks or more, we don't get to say goodbye to them.

We're making that sacrifice, so do us a favour and stick to the rules, don't gather for social drinks on a Friday, hold off on seeing your mates for dinner. Just wash your hands and keep your distance.

We will come out of this and life will return to normal.

When that happens, my family are going to have a memorial service and give a proper farewell.

But in the meantime, I love you nana.