The Ministry for Primary Industries says it will carry out an inspection on a Canterbury beef feedlot, after an animal welfare complaint was received. 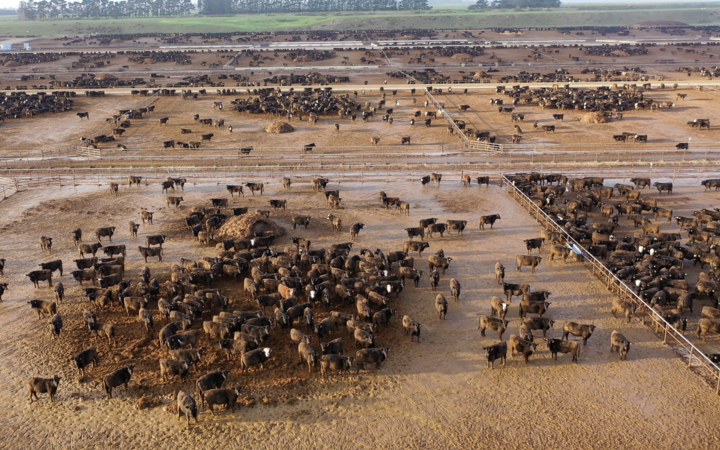 Environmentalist Geoff Reid described the conditions the animals were being kept in as mud farming. Photo: Supplied / Geoff Reid

The Five Star Beef feedlot near Ashburton, owned by ANZCO Foods, farms about 14,000 cattle which are grain fed, rather than grass fed.

Images of the feedlot were published online last week by environmentalist Geoff Reid - who described the conditions the animals were being kept in as mud farming. He said the feedlot was causing harm to New Zealand's reputation.

The Ministry for Primary Industries said it had received a complaint about the feedlot and would carry out an inspection. It said staff had reviewed the photos and couldn't see "signs of obvious animal welfare issues," but it was committed to going onsite.

MPI said it was unclear when the photos were taken, adding it could only investigate when it had timely information.

"Issues regarding winter grazing can be time sensitive, and we ask that anyone with relevant information acts in the interest of the animals by sharing it with us immediately, so that the animals' welfare can be attended to."

The Ministry said its veterinarian services (VS) team audited the feedlot every three months as part of the required audit for EU High Quality Beef programme, which looked mainly at feed requirements for animals in the feedlot.

It said while these audits were not focused specifically on animal welfare, its VS veterinarians conducting the audit were Animal Welfare Inspectors under the Animal Welfare Act. The last audit to verify compliance of Five Star Beef feedlot was on 21 August 2021, it said.

ANZCO Foods said it understood MPI needs to investigate any concerns and would assist in the process. It said it took its animal welfare responsibilities extremely seriously.

"New Zealand has some of the highest animal welfare standards in the world. Five Star Beef is independently held to these standards," it said.

ANZCO Foods said Five Star Beef cattle were raised on grass until about 18 months of age. Cattle were then sent to Five Star Beef for finishing on grain for an average of 120 days in a controlled environment.

It said all cattle had good access to fresh water and were regularly inspected throughout the day and night.

"It is in Five Star Beef's commercial interests to take the best care possible of the cattle."