Farmers and growers are counting the cost - thought to be in the tens of millions of dollars - of the Boxing Day hailstorm in Tasman. 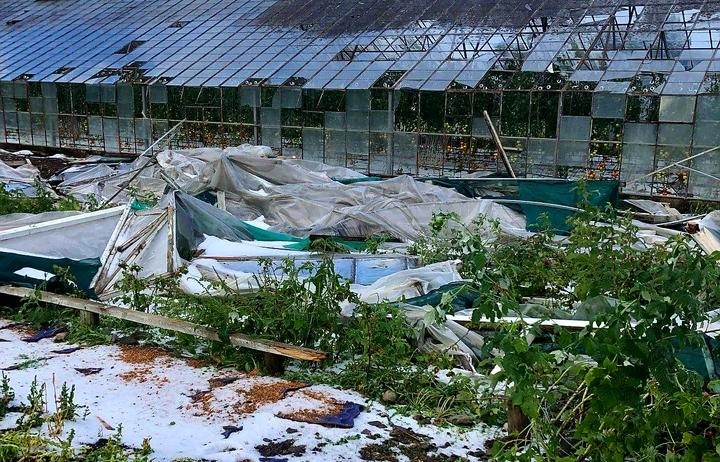 A glasshouse in Motueka was ripped apart by a twister, which also dislodged the support posts in an old wooden glasshouse. Photo: Facebook / Victoria Gardens Fruit & Vege

Some say it was the worst hailstorm in living memory, in a region where recent summers have been marred by cyclones, floods, and fires.

Moutere resident and Minister of Agriculture Damien O'Connor said he was among many others for whom the end of 2020 would have special resonance.

But he was in no doubt about the lingering impact of what has just happened in his neighbourhood.

He said the flow-on effects from what would have been thousands of people employed through the coming season - and the local business that supported the industry, many which had themselves been hit with water damage, would be ongoing.

"The real impact on the region will be over the next 12 months."

He told Morning Report some orchards have had their whole crop damaged.

"What's happened with some crops like hops it has literally shredded all of the leaves, therefore the ability for the plant to carry on and flower has literally been eliminated."

For apples and kiwifruit, the hail marks the fruit and makes it unsuitable for high value, with the only option being juicing, he said.

"That becomes almost unviable because you've got to pick the fruit and get it off the trees. The fruit will need to get off the trees but that can be hit off and then left to waste on the ground.

"These are the kinds of questions that growers will have to work through over the next week or so, they will need assistance to make the right decisions and they will need support."

Hardest hit were Lower Moutere and Motueka, but growers on the Waimea Plains have also suffered damage from the storm that lasted more than half an hour. 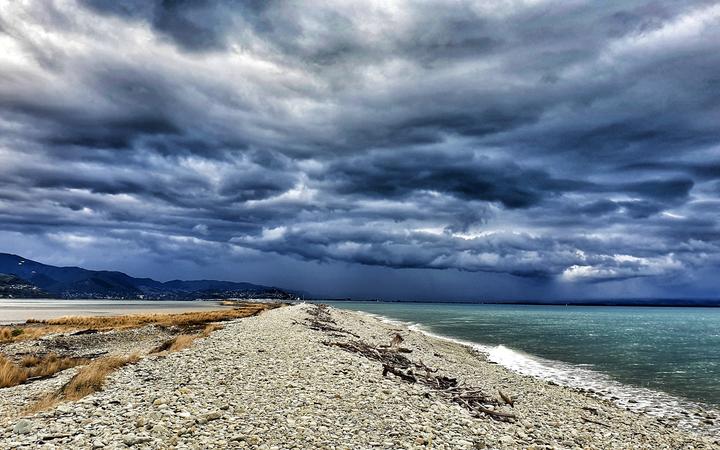 "But in a case like this, a lot of that wasn't as effective as it could be. The hail in this case was just so massive and heavy that a lot of those structures have been damaged as well.

"In some cases it's a bit of a double-whammy. Not only has the hail affected the crop, it's also had a pretty massive effect on the structures that were supposed to protect it."

The hail lay on the ground up to half a metre deep in places, and remained frozen there until the next day. 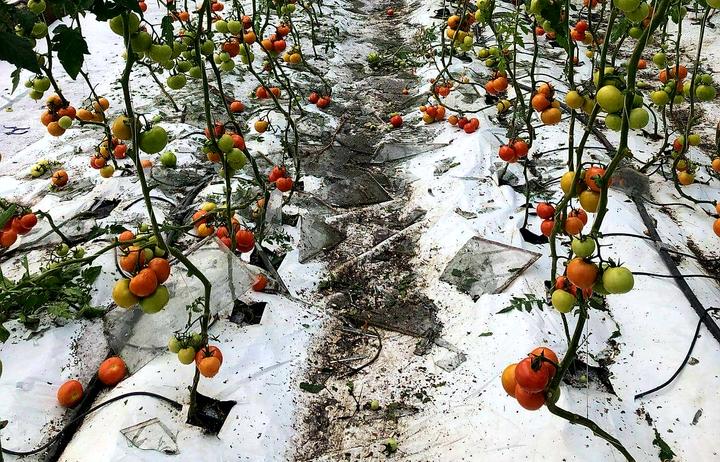 A glasshouse in Motueka was hit by a twister, which destroyed three of the gardens' 25-metre tunnel houses. Photo: Facebook / Victoria Gardens Fruit & Vege

A long-time grower in the Moutere and former Pipfruit New Zealand chair, Ian Palmer, said he had never seen anything like it.

"It goes beyond one sector - it's regional and I think the impact will be felt for a long time."

Hail from the cloudburst blocked gutters on buildings in Motueka, leaving several red-stickered and no longer safe to enter.

Tim King said the region would now be bracing itself for a huge hit to its economy, which in recent weeks was given a gold star for its performance in the latest quarterly figures from Westpac McDermott Miller.

"Horticulture is a massive part of this region's economy; from transport to post-harvest work," he said.

"Obviously there's the immediate impact on the crop, the growers and the picking, but all the businesses that support the horticulture industry, including the port company - all of these things are likely to be impacted for quite a long time." 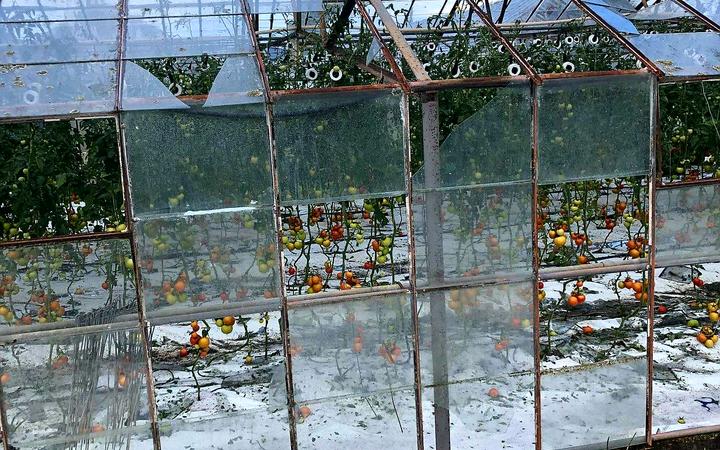 A twister moving through this glasshouse in Motueka forced those on site to shelter in a shipping container. Photo: Facebook / Victoria Gardens Fruit & Vege

Ian Palmer said initial estimates placed the cost of damage to crops alone at between $70 million to $80 million.

"You add almost that again in lost opportunity for the region. I think this will be quite a serious impact on the back of the year we've had."

He said the mental health of growers would be under pressure.

He knew only the worst damage would be evident right now.

"Some of the damage is easy to assess, but sometimes you've just to leave it for a week or so for the true damage to really show, and I think that's what a lot of the growers will be doing." 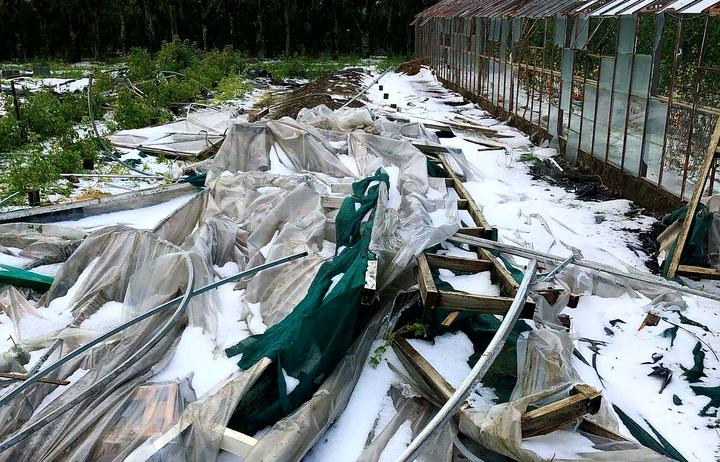 Debris was flung over a glasshouse in Motueka and the neighbour's property as a twister moved through the area, after which hail hit as well. Photo: Facebook / Victoria Gardens Fruit & Vege

Damien O'Connor, who spent Sunday visiting growers, said the Ministry for Primary Industries had done an initial survey to gauge the help that might be needed. They estimated up to 70 percent of the growers had hail cover.

Kempthorne said support services were being kicked into gear, and would be ready when growers were.

"My initial plan, rightly or wrongly, is to leave it a few days before going out to growers I know are badly affected, and seeing how they are and seeing what the trust can do to help."

He said the trust was there to help growers organise visits from assessors, and connect them with support services.

The Insurance Council of New Zealand was urging those affected to contact their insurer or insurance broker as soon as they could, to help them lodge and progress claims.

It said while many businesses closed for the holiday period insurers were there to support those affected.

MetService meteorologist Lewis Ferris told Morning Report a weather even like this didn't happen too often, but it might've been decades since it occurred.

"There was a warning that had been issued for this thunderstorm," he said.

"It's very hard to tie down a single event like this to climate change, in this kind of regime we'd be expecting trends.

"So if we're seeing this happen more frequently then that would be tied back easily, but what I will say is with the warming climate and oceans, we get more moisture in the low levels which is a good fuel for these thunderstorms to kick off."

Heading towards the new year, he said showers could be expected around the southern regions, like Central Otago, with the North Island looking relatively fine. But there is a risk for more thunderstorms heading into the new year.