The rolling hills on the Dasent family's farm in rural Hawke's Bay are a sea of brown as far as the eye can stretch.

Their family has farmed here in Maraekakaho for 113 years and while they've experienced droughts before, it's never been like this.

"We've only had 13mls of rain over the whole of April," says Rhea Dasent, who is the fourth generation of Dasents to farm the land.

They've had only 26 percent of their average rainfall for April, and the last four months have been the driest on record for the region.

In fact, there really hasn't been any decent rainfall since October.

The drought has forced Rhea's retired father, Jeremy Dasent, back onto the farm, where the sheer lack of hay anywhere in the North Island means they're now feeding palm kernel, or PKE, to their cows for the first time. 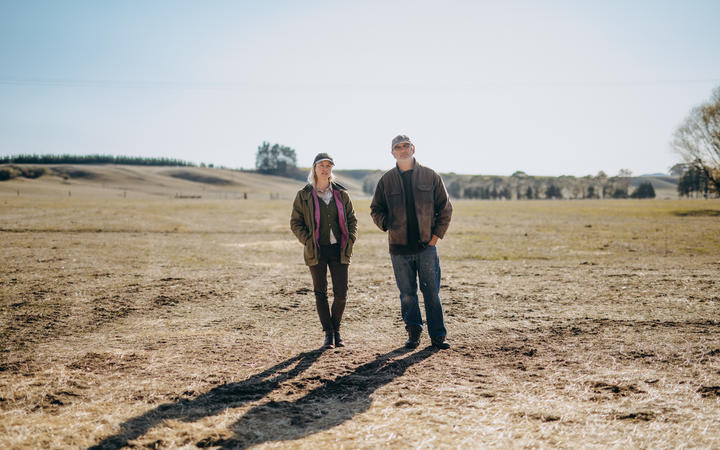 And it's costing them tens of thousands of dollars they can ill afford.

A large shed, built by their forefathers during the Great Depression, used to store hay but now houses only a mound of brown PKE.

Nearly every farmer in the North Island is scrambling for feed.

"If things haven't changed by then, then I'm really in trouble."

They have already had to sell half their stock and they are reluctant to sell any more - even if they could.

They had only just restocked the farm after having to cull all their cattle last year as a precaution against a potential M-Bovis infection, and Covid-19 restrictions mean the meatworks aren't operating at full capacity, so it's difficult to get stock in there.

The drought was the last straw after a tough few years, and the father and daughter said government support for farmers like them was too little, too late.

"The only support the government gives us is advice. But that doesn't pay the bills," Mr Dasent said.

He'd like to see those struggling with the double whammy of the drought and the pandemic to have access to the wage subsidy, or even cash for farmers to buy feed.

"It really stuck in the craw to read about some of the meat works companies getting big wage subsidies because they were on the go-slow because of Covid-19," Rhea Dasent said.

It's brown as far as the eye can see in the Hawke's Bay. Photo: RNZ / Dom Thomas

"But farmers were just as affected by the works, but there were no corresponding wage subsidies for us."

Through tears, the Dasents say their farm will survive this "exceptional" drought, but it could take years for them to recover.

An "inch of rain" could change the farm's brown to green overnight.

But what is really needs to break this drought is at least "five to six inches worth" of rain.

"This farm will recover, it always does," Mr Dasent said.

"We will get through."