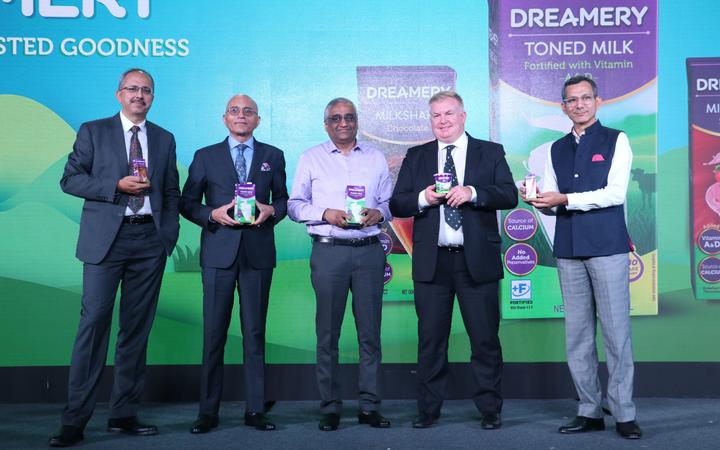 Representatives from Fonterra and Future Consumer Limited at the launch of Dreamery. Photo: Supplied / Fonterra

Yesterday, as part of the new joint venture, it launched Dreamery with an initial four-product offering of two milkshakes, a yogurt and UHT-toned milk.

Fonterra's managing director for India, Sunil Sethi, said about a quarter of people's daily food intake in India had some form of dairy in it.

"Traditionally many dairy products including curd and ghee had been made at home, but this had shifted in the last 10-15 years, making it a market of great opportunity," Mr Sethi said.

"When the brands are companies have started offering dairy products which are as good, if not better, as what they used to make at home, the convenience that brings in has led to this shift of made-at-home, to brought-to-home."

Mr Sethi said social media had also made the Indian consumer more aware of the different types of dairy products on offer around the world.

"Given the [greater] exposure, they're far more amenable to try out new things."

Dreamery will supply a range of dairy products from Indian milk - as well as selling imported produce from New Zealand.

The first products would be available on retail shelves in key cities including Mumbai, Pune, Bangalore, Ahmedabad, Hyderabad and Surat.

The venture into the Indian market is the second of its kind for Fonterra. The company had an eight year joint venture with Bangalore-based Britannia Industries, which it ended in 2009.