As the bull sale season picks up around the country, the first on-farm bull sale in more than a decade was held in the small farming community of Rangiwahia, this week.

Murray and Fiona Curtis set up Riverlee Stud four years ago and held their first sale on Wednesday, to allow sheep and beef farmers to buy the bulls direct through them.

It was the first ever sale of Herefords in the Manawatu-based town and bidders' hands flew up as the sale got underway.

Eighteen of the two-year-old bulls were sold, with an average price of $4438, about $800 less than the national average price according to PGG Wrightson.

Around 70 farmers made the trip to Rangiwahia - an hour inland from Palmerston North just below the Ruahine Ranges - to see the 21 bulls on offer.

Unsure what to expect of the first sale, the stud's owner Murray Curtis was pleased with the results.

"The nerves were going, the heart was pumping, just to see what was going to happen, but as soon as I'd done a couple of bulls, I could see people were going to buy," Mr Curtis said.

The station's manager, Jason Gillespie, said buying local was about supporting the community, but also buying stock that was used to the harsh winters and steep country.

"I came down a month ago to have a look at them. Being the first sale, you come and have a look, see what they're like. They were really good temperament, pretty soft, easy going bulls," Mr Gillespie said. 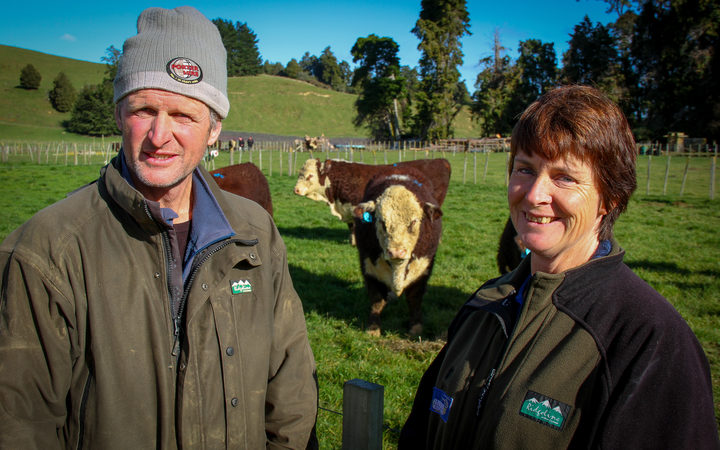 The Curtis family bought the sheep and beef farm nine years ago and run a breeding and finishing operation alongside the stud on more than 500 hectares.

They initially sold bulls privately to dairy farmers, until there was interest from local beef farmers.

The stud now allows them to diversify their income throughout the year.

"We're having a June sale for the beef, then we sell privately to the dairy guys in September ... and then once that's all finished, December is when the lambs kick in. So that's the idea of the business, have a constant cash flow coming through," Mr Curtis said. 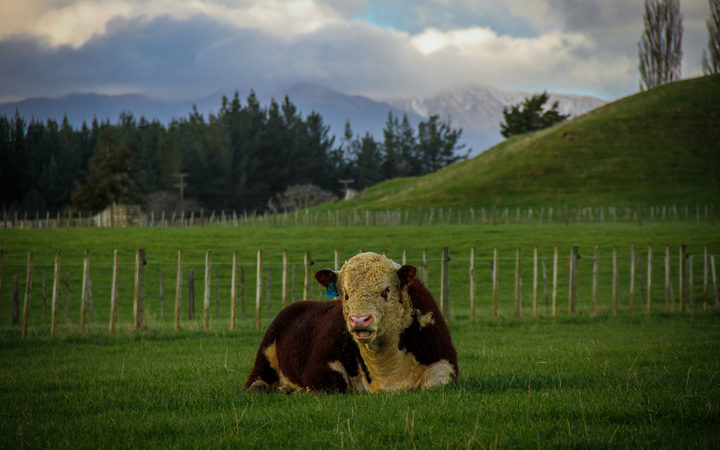 One of the Hereford bulls with the Ruahine Ranges in the background. Photo: RNZ / Alexander Robertson

The national genetics manager at PGG Wrightson and auctioneer at the sale, Callum Stewart, said beef prices were still high, but farmers needed to prepare for when they might drop.

"We've had bubbles where they burst, we've seen that in the dairy market. It went right up and then just went bang and straight back down," Mr Stewart said.

"I don't think we're ever going to get to the low levels that we've seen, but if we could get a market between $5 and $5.50 deadweight consistent, that would give everyone good returns and make hill country farming well worth while." 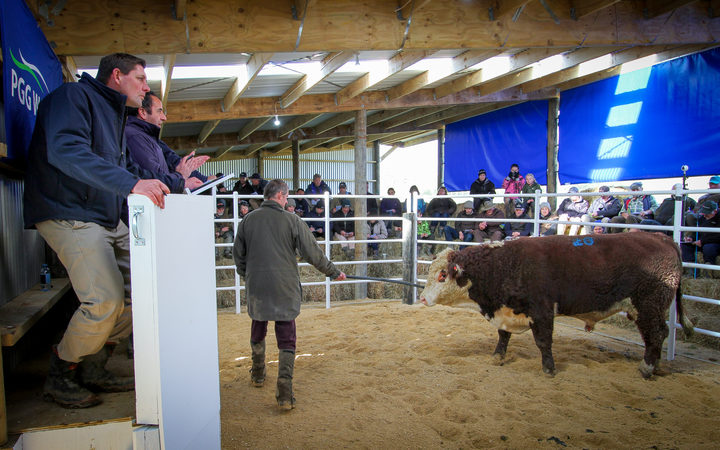 Twenty-one bulls were put in the ring to be auctioned, 18 were sold. Photo: RNZ / Alexander Robertson

Murray Curtis described the sale as a community event, and Rangiwahia locals turned up to show their support and help run the sale.

One of them was Greg Clifton, who's lived in the community all his life.

In the 52 years he's called Rangiwahia home, he's seen the community change in many ways, like the school closing in 2014 and smaller farms amalgamated into bigger units.

"The communities are shrinking and I think the farms are getting bigger, so you're requiring less staff.

"Technology is getting better, that's chewing up and perhaps taking a labour unit of that and the service industry they come from town now, they don't support our local areas," said Mr Clifton.