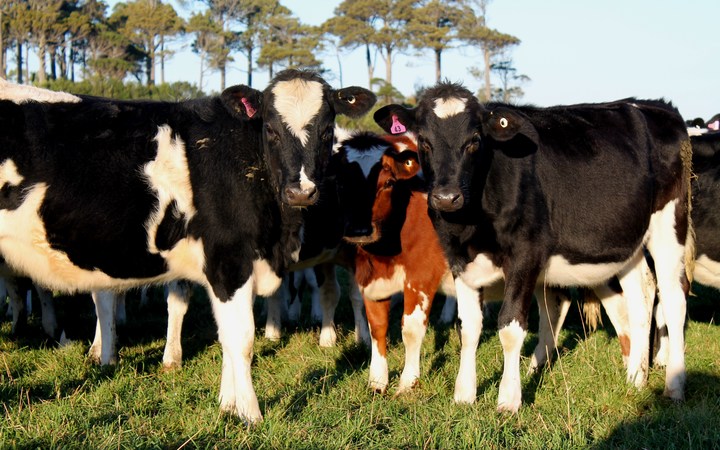 The Green Party has obtained a copy of a Ministry for the Environment briefing which says significantly cutting emissions will not be possible unless there are changes within the industry.

The briefing said any significant reduction in agricultural emissions, even in the long-term, "would require trade-offs against plans to grow the economy" through meat and dairy exports.

The government plans to double the value of exports by 2025, but under the Paris climate change agreement must meet a target of reducing emissions by 30 per cent below 2005 levels by 2030. Agricultural emissions make up 49 percent of the country's total, the government says.

Green Party co-leader James Shaw said the briefing showed it was not possible to both increase dairy exports and cut emissions.

"Essentially, the advice says you cannot do both of those things and yet our government for the last year has persisted in pursuing both strategies, which are incompatible with each other."

But Federated Farmers' climate change spokesperson Anders Crofoot said it was achievable, by raising the value of dairy products rather than increasing production.

"If we can double the value we can keep producing the same amount and increase the amount of money we're getting for it ... that's something that needs to be pursued fairly vigorously."

"We recognise that a is needed to address the challenges facing agriculture. Farmers are dedicated stewards of the land and want to do the right thing by the environment and their animals," he said.

Mr Pridmore said he agreed with the report by Parliamentary Commissioner for the Environment Dr Jan Wright, in October last year, that mitigation of greenhouse gases from agriculture was difficult and required a multi-pronged approach.

Mr Shaw would like to see a shift to more sustainable farming practices, such as organic dairy farming.

"You're running a lower herd size so your methane emissions are much, much lower than they are from an intensive dairy farm.

"Also, you're not using nitrogen fertilisers which leads to nitrous oxide in the atmosphere and run-off into the soils and into the rivers."

Organic products could also bring in higher revenue, such as organic milk powder which sold for about $14,000 a tonne on the international market, compared to commodity milk from an intensive dairy farm for about $3100, he said.

Minister for Climate Change Paula Bennett said the government was trying to figure out the best approach.

"We're not going to meet our emissions target if we have business as usual," she said.

"The programme of work that we've got going on at the moment is how do we reduce those emissions, and because of the profile of agriculture we would have to be seeing a decrease in agriculture as well as our electricity use, fossil fuels and others."

The Ministry for Primary Industries' recent report on the primary sector forecast that over the next five years dairy cow numbers would return to their peak of 5.2 million and milk solids production would increase by 14 percent.

Primary Industries Minister Nathan Guy said in a statement that reducing agricultural emissions while the economy was "a difficult challenge, but one we must solve."

He said the Biological Emissions Reference Group created last year, to bring together agricultural, horticultural and farming stakeholders, would ensure the government had best possible range of information to reduce biological greenhouse emissions.