A Palmerston North church is considering introducing security measures after it and another church were targeted with anti-Muslim propaganda. 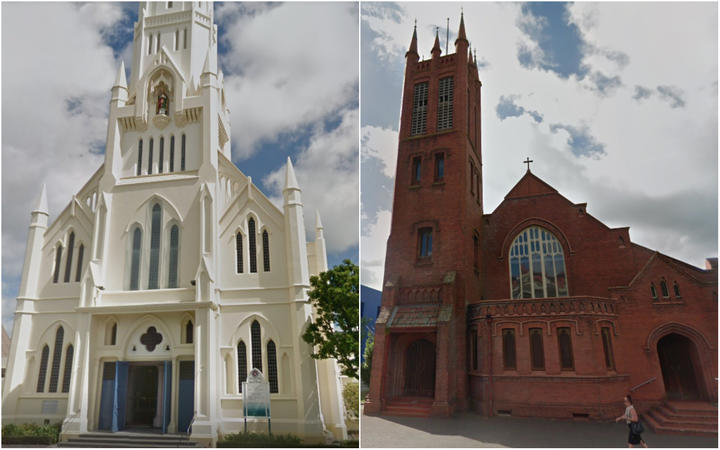 The Cathedral of the Holy Spirit, left, and the All Saints' Anglican Church. Photo: Screenshot / Google Maps

Attendees of All Saints' Church, and the Cathedral of the Holy Spirit found the crudely written pamphlets on their windscreens after Sunday services.

Reverend Andy Hickman from All Saints' Anglican Church said the pamphlets were distressing.

"The pamphlet itself uses really extreme language such as 'Islam is the enemy, this is a declaration of war, this is them versus us'," he said.

Both churches held solidarity events with the Manawatū Muslim Association after the Christchurch shootings.

Mr Hickman said he believed the events were directly connected to the pamphlets, but they would not be deterred.

"Everybody I have communicated with have no regrets, because we won't allow hate to divide us.

"Love overcomes a multitude of fears, so we will continue to publicly express our solidarity with our Muslim friends," he said.

He has reported the matter to the police, but in the meantime he said the church was looking at increasing security.

City councillor Lorna Johnson said overall Palmerston North was an inclusive and diverse community, but there were a few individuals who have become more emboldened since the Christchurch shootings.

"There have been a couple of unpleasant incidents where Muslim members of our community have been abused in the city, and there have also been quite a number of anti-Muslim comments ... made online when we've been posting stuff about supporting the Muslim community locally," she said.

Manawatū Muslim Association president Zulfiqar Haider Butt said in the past they have not drawn attention to these types of actions to avoid panic, but they have now decided this needs to change.

"If you don't speak against anything, people who are doing this are encouraged and then they keep on increasing these things.

"By challenging them, recording them or informing the community, the community will know this has happened and if anything like this comes up we need to speak out and inform someone," Dr Butt said.

He and Mr Hickman have offered to sit down and speak with the person or people involved.

"If they accept Andy's or our offer they can come to us and discuss what the anger is about and I'm pretty sure that will be successful in clearing their minds," he said.

RNZ has tried to contact those involved, as they left their number on the pamphlet, but it went straight to voicemail.