Prime Minister Jacinda Ardern has spoken to media on her second visit to Christchurch since the terror attack and has confirmed there will be a two-minute silence this Friday. 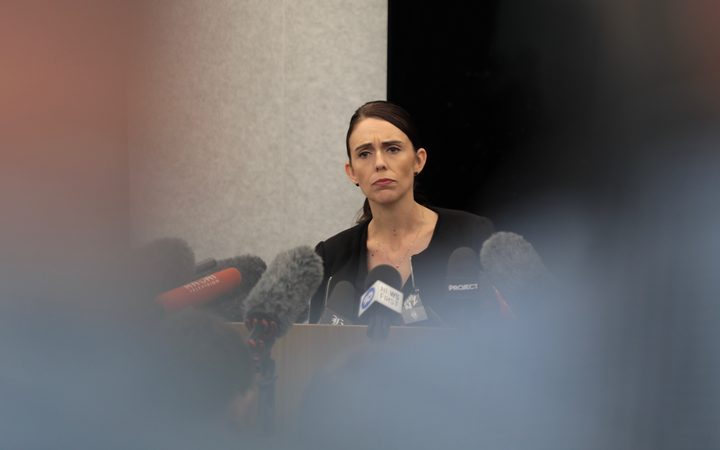 She said there would be a memorial service, but that planning continued.

"While it will be in Christchurch we want to involve the rest of New Zealand.

"There is a desire to show support to the Muslim community as they return to Mosques, particularly on Friday.

"To acknowledge this there will be a two minutes' silence on Friday. We will also broadcast nationally, via TVNZ and RNZ, the call to prayer."

"Many New Zealanders would be astounded to know that you can access military-style semi-automatics.

She hoped New Zealand could now demonstrate what could be done with gun control.

"But this individual still had not come up.

"So the question we need to ask is, 'should he have?'.

"And we will answer those questions."

Ms Ardern said policy makers had worked through the night since Friday's attack, exploring changes to gun control for presentation to cabinet this week.

She said Australia, after the Port Arthur massacre, had changed its laws in 12 days, and New Zealand would do it in less.

Ms Ardern said she was not aware the NRA had been targetting and lobbying in New Zealand.

She anticipated that the country's gunholders and users would be with the government on the issue of regulation.

A 'sense of support' for the Muslim community

"Their response has been overwhelming that what they seek is justice … but overwhelming they keep reflecting back to me the sense of support they have had from the New Zealand community," she said.

"They are the group that we need to be wrapping all of our support around. They are the ones who are demonstrating utter compassion for one another and gratitude for the support of New Zealanders.

"What I've heard from the Muslim community [is] the rejection of extremism, violence and hate, no matter where it comes from."

Ms Ardern said the fact that bodies were still being returned to families was "a frustration I can honestly say I share".

"I have had an update that we have had 30 victims approved for release and to be reunited with their families.

"I know the process has been difficult and frustratingly slow from the perspective of family members."

However, she did say the people working behind the scenes had been doing so with urgency. She said there had been some learning along the way as the circumstances had been so unique.

Ms Ardern acknowledged that Ngai Tahu had been "incredible" in their support of victims and families.

Ms Ardern said St John's wanted to acknowledge the police officers first on the scene on Friday as they were the ones who first administered first aid.

On the issue of social media regulation, she said: "These are global entities, it will take a global response."

She said not everyone needed to be on board "but a few friends" would help make a difference.

But when asked if United States' President Donald Trump had done enough to spread a message that Ms Ardern wanted to see spread, she said her focus was on New Zealand and its people.

"Whether or not it's the issue of terrorism, violence or racism. . . I will always speak from a New Zealand perspective on behalf of New Zealanders. It is up to other world leaders what they choose to do."

Ms Ardern did, however, discuss the need to take a collective approach on global issues.

"There are some things that we do need to confront collectively as leaders internationally. We cannot, for instance, just simply deal with some of the issues we face with our social media to be dealt with on a case by case basis. There is an argument there to be made for us to take a united front on a global issue.

"This is not just an issue for New Zealand, the fact that social media platforms have been used to spread violence [and] material that incites violence. All of us need to present a united front."

Ms Ardern discussed Turkish President Tayyip Erdogan's comments earlier this week that criticised the Anzacs for their role in the Gallipoli campaign and threatened to return anyone who came to his country with anti-Islam sentiment back in coffins.

Answering a journalist's question about what she wanted to say to the people of Australia, knowing Friday's attacker was Australian, she said: "We're also incredibly aware that Australians will be feeling that too.

"Yes, we have acknowledged this person was not a New Zealand citizen. They did not grow up with this ideology here. They did come to us and they did bring this terrorist act with them but we do not see that as a reflection of our relationship with Australia."

She said one of the stories she heard in the aftermath was that some of the victims were Syrian refugees.

"I cannot tell you how gutting it is to know that a family came here for safety and refuge and they should have been safe here."

Ms Ardern said she could not discuss a specific difficulty that had impacted her most since the attacks as it had all been hard.

She earlier spoke at Cashmere High School, where two of those killed in the attack were students, urging those assembled to help make New Zealand a safe environment by ridding the country of racism and extremism.