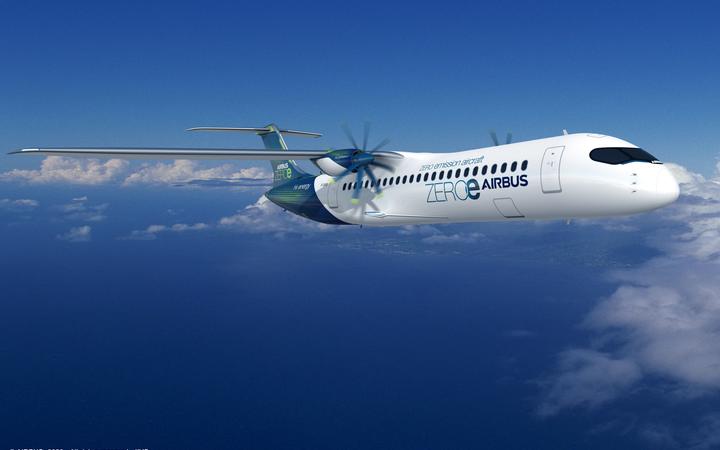 A concept image of a hydrogen plane which Air NZ says could cut down 20 percent of emissions in the future. Photo: Supplied / Airbus / Air New Zealand

The country's flag carrier has laid out four pathways in order to cut down pollution in its latest sustainability report.

Sustainable aviation fuels had the biggest potential decarbonisation impact on the airline, with the potential of reducing 50 percent of its carbon emissions by 2050.

Zero emissions aircraft, such as future hydrogen planes could cut down 20 percent of emissions, the airline said.

Key initiatives include the replacement programme for its De Havilland Q300 fleet of turboprops, currently used for domestic travel.

The airline said it was focused on an electric or hybrid substitute for the replacement programme.

Renewing its fleet to new jets that are more fuel efficient could reduce 20 percent of emissions and operational efficiency could cut down 2 percent of carbon, the airline said.

"Despite the Covid-19 pandemic grinding our business to halt, we believe climate change is the biggest crisis facing our airline. And, if anything, our commitment to take real action has only strengthened," Air New Zealand chief executive Greg Foran said in a statement.

"It has never been more important for airlines to take bold steps to ramp up the pace and scale of genuine climate action. We want our customers to know that not only do we have a clear plan, but we already have multiple runs on the board on our journey to becoming a more sustainable airline."

The airline said it was also working with aircraft manufacturers to speed up the arrival of zero emissions aircraft.

"Air travel is critical to New Zealand's export and tourism industries, connecting people and products to the world, and the world to us. But this isn't an excuse to do nothing - it underlines why climate change action is so critical and why we need to get this right," Foran said.

"We don't believe our customers will have to choose between flying with us and doing what's right for the planet," he said.