The return of a travel bubble with Australia is giving an uneven boost to tourist operators.

Before the pandemic, Australians made up close to half of all international visitor arrivals, spending $2.7 billion in 2019.

The bubble opened in mid-April but, so far, most trips are families and friends simply desperate to reunite.

Trans-Tasman trips made up the bulk of international travel in April, with 39,900 arrivals and 30,200 departures.

Most of those were New Zealand citizens - the majority travelling to see family and friends.

Development West Coast is running a campaign to encourage more Australians to add a visit to their region during winter.

Its chief executive Heath Milne said the tourist dollar had yet to materialise.

"I'd have to describe it as a trickle. We've had a few honeymooners. So obviously people are out there celebrating, and a few free and independent travellers, but definitely no tour groups have come through yet. And we're not really seeing too many forward bookings in that space either," Milne said.

West Coast operators were optimistic more travellers and tour groups would come through later in the year, but there could be some initial anxiety for travellers, he said.

"There's always a risk of getting stuck over here if something goes wrong from a Covid point of view, but as more vaccinations happen, I think that that anxiety is going to go away. So we're confident that we're going to have a better outcome this summer."

Across the harbour from Auckland's CBD, in the seaside suburb of Devonport, Pauline Baker has been running Magic Broomstick Segway Tours for the past 13 years.

At least half of her visitors were usually Australians, but she said few had come through since the bubble opened.

Ngāi Tahu Tourism runs Shotover Jet in Queenstown, Dart River Adventures in Glenorchy and Hukafalls Jet on the Waikato River, which were all temporarily put into hibernation last year. 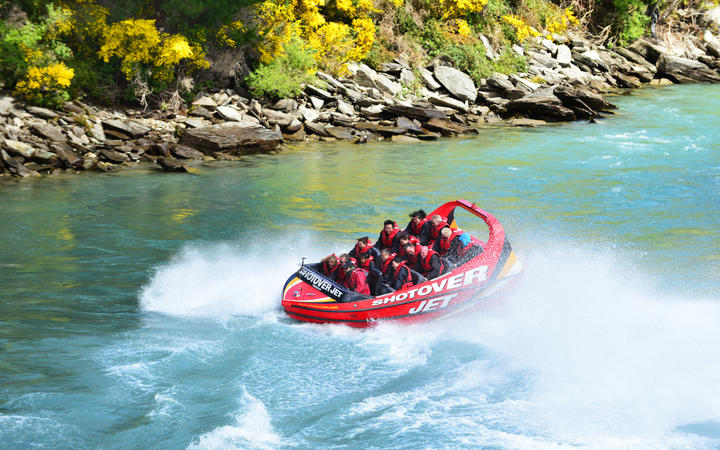 Its jet boat operations manager Jolanda Cave said the bubble was slow to start but was picking up more pace.

"We celebrated our first two Australian customers and it took, I think, three days to finally get them to now really seeing it being, you know, 30 percent of our customers that are coming through the doors are from Australia."

During peak winter, their Otago jet boats could be on the water every 15 minutes.

Cave expected that would be closer to every 30 minutes due to reasonably full bookings.

"It's so positive for us as an industry. It's so exciting to see people come back, to hear the boats buzzing on the water and see the faces the team really just enthusiastic about the fact that you know people love coming here and doing the products."

Its chief executive Paul Anderson said they had a massive spike in website enquiries when the bubble was announced.

"They've translated through to good solid bookings, our bookings are up above what they were in the same time in 2019 and the other good news we're getting out of agents in Australia is they've got really strong inquiry coming to have a winter holiday in New Zealand based around ski."

Tourism operators remained hopeful more Australians will cross the ditch as states start their winter school holidays from this weekend.