Directors behind failed construction firms Stanley Group and Tallwood Holdings have appeared in front of creditors to apologise, saying they take complete responsibility. 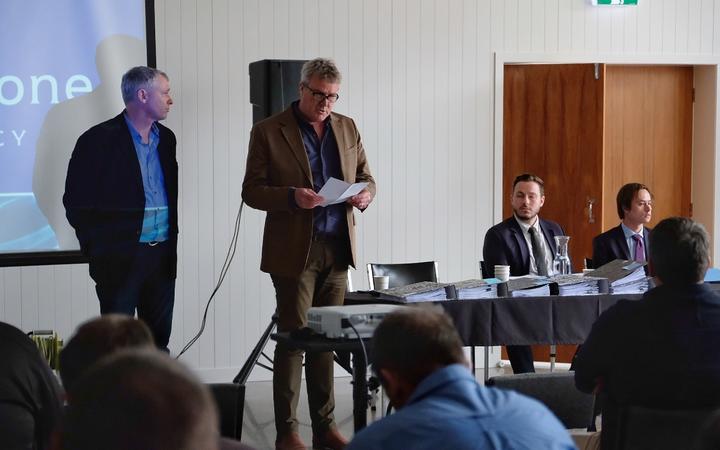 Creditors and liquidators met for the first time in Matamata yesterday in a four hour quest for answers.

Up to 100 of them gathered at the town's racing club where a visibly emotional Kevin Stanley, whose grandfather started Stanley Group more than 90 years ago, read a short statement alongside fellow director Craig Davison.

"As a director, a CEO, and barer of the Stanley name, I take full responsibility for what's happened and has drawn us all here today."

"The harm has been far reaching and we've let down over 100 staff, our local and national supply network, our subcontracted partners, the community of Matamata, the New Zealand construction industry, and our families. May I extend on behalf of Craig and I my sincere apologies to you all."

After just over two minutes there were no angry outbursts, only a probing shout of "what did you hope to achieve by saying that?" which was quickly shut down by liquidator Damien Grant as the two directors left the room.

As Mr Grant went through his report into the companies finances the audience became more vocal.

A group sat at the front interrupted him frequently, questioning his decisions, how he would hold the directors to account, and some fought for the meeting to be adjourned.

The companies owe creditors about $10 million, many of whom are subcontractors who were not paid in August and have more long-term debts.

Progress had been made, Mr Grant said, with deals reached with the developer Solution Street to pay subcontractors $381,000 owed for their work.

A deal signed on Tuesday with Housing New Zealand would also mean contractors across its three sites would get paid.

While the terms and value of the deal were confidential, he said one of the terms would mean the amount paid by Housing New Zealand wouldn't be claimed by subcontractors in the liquidation.

"That significantly reduces the level of creditors in this claim, and there's about a million dollars worth of money floating out there that I believe could potentially be recovered. The smaller I can make the creditor pool, the further that money is going to go."

While some challenged him that it smacked of preferential payment he said they were welcome to criticise him or vote him out of office if they didn't like the deal.

"Objectively when I'm looking at the situation I have the opportunity to get I think it's about 90 subcontractors a seven figure amount of money in a really short space of time." 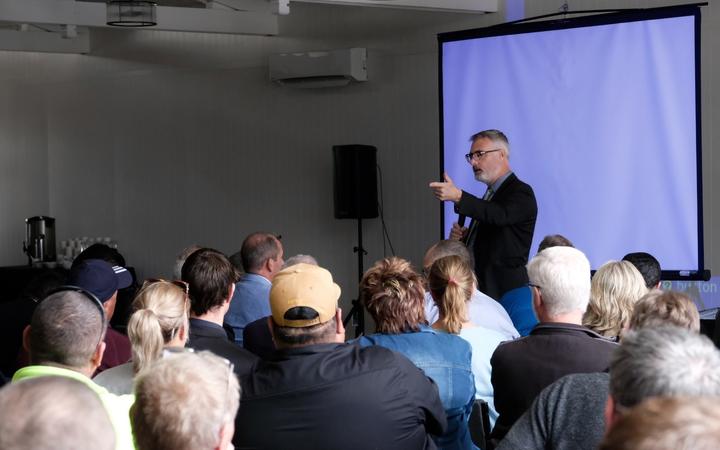 The issue of whether the companies held retentions for its contractors was chief among creditors' concerns.

Companies can hold back payments to subbies until they are satisfied with the job but the money should be held securely and can't be used for anything else.

Many have been pinning their hopes on that money being available but as the first liquidators report suggested that's been dashed.

"All up the retention shortfall is about 1.5 million," Mr Grant told the meeting.

Damian Grant told creditors the directors argued they had held retentions in mixed funds including $200,000 in cash, and more than $1.2 million in bonds.

"I don't accept the directors argument that the bonds can be used to net off their retention obligations because they're not liquid funds."

Despite repeated questioning he couldn't say exactly how the directors would be held to account.

"It is my view that the directors have liability here, the only question is what's the most economical and effective way to do that."

There were calls by some unhappy creditors to replace Damien Grant, with PwC liquidator Craig Sanson joining the meeting as an alternative.

After several heated exchanges between the two, creditors voted to retain Damien Grant in all but one of the smaller Tallwood companies.

"It's pretty obvious they haven't held retentions in trust but there seems to be no liability or punishment for that ... it's not about the money now, it's about setting a precedent for the next time this happens so directors are held liable."

A legal fund has already been established by another creditor, Dave Burt.

"I think if we don't challenge this in court to make sure that directors are held to account for decisions they make around retentions, which is subcontractors money not theirs, we're going to get more of this," Mr Burt said.