Annual economic growth has slowed to its weakest level in nearly six years as growth in service industries offset construction and manufacturing weakness, leaving open the prospects of another cut in interest rates by the end of the year.

Gross domestic product (GDP), a broad measure of the health of the economy, rose a seasonally adjusted 0.5 percent for the three months ended June, in line with forecasts but down on the the previous quarter.

"Service industries, which represent about two-thirds of the economy, were the main contributor to GDP growth in the quarter, rising 0.7 percent off the back of a subdued result in the March 2019 quarter ," Stats NZ senior manager Gary Dunnet said.

Annual growth slowed to 2.1 percent, the slowest since the end of 2013.

Much of the growth in services came from the arts and recreation, public administration, transport, hiring and real estate group, all of which 1 percent or more. Growth in retail and accommodation was more modest. Primary industries also bounced back after two poor quarters when weather affected production.

The notable weak spots were construction, particularly non-residential, and manufacturing, with less meat and dairy production.

The GDP-per capita, which is a measure of the country's standard of living and is influenced by migration gains, grew by 0.2 percent for the quarter and by 0.5 percent for the year, pointing to continued weak productivity.

An economist said the data showed the economy was running out of steam with future risks to the downside, and likely to get another interest rate cut from the Reserve Bank.

"We expect that the RBNZ will be forced to act by further cutting the OCR (official cash rate) to 0.75 pct in November."

He said it as also time for the government to step up and spend to stimulate growth.

"What's needed to snap us out of limbo, is strong, wise, and expansive fiscal policy," Mr Kerr said.

Financial markets were largely unmoved by the data.

"Obviously it's a reflection of the global environment that we're, it still sees New Zealand tracking ahead of a number of our trading partners, some positive results in the service sector but clearly in our export exposed industries ... there is a hit"

The latest figures were for the period up to the end of June and new spending in the Budget that should stimulate the economy didn't kick in until July, Mr Robertson said.

"That does have expansionary fiscal policy in it, and we'll continue to look at ways we can support the New Zealand economy. 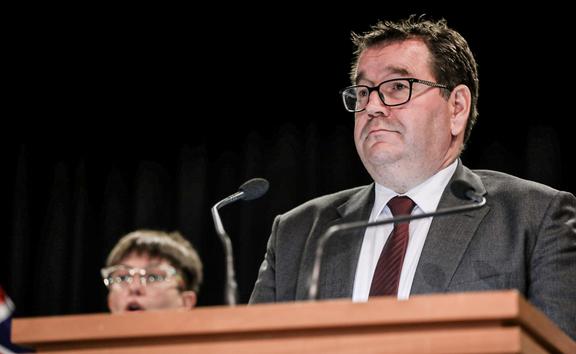 Meanwhile, the global headwinds weren't going away, he said

"And New Zealand as a country is well positioned to deal with them but the effects are going to be felt."

The government could not put the blame on the global economy, he said.

"They've presided over a collapse of business confidence here, actually our export prices are high, we should be doing well as a country but we're not."

That was just not true, Mr Robertson said.

"We do have a plan to grow the New Zealand economy and make it more productive ... we've got a plan that's about a modern economy here, but it will take time to turn around the issues that we were left with."

The coalition government was delivering an "enormous" amount, he said, "from health, to education, to housing, to cleaning up our waterways".