A downturn in log prices could signal the start of a global market reset, a North Island forestry management firm says. 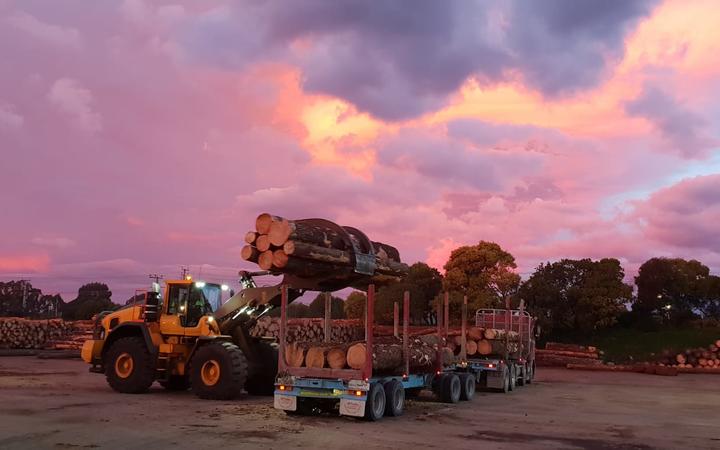 As many as 1000 Kiwi forestry workers could be left without jobs after a sudden drop in the price of logs.

New Zealand logs are reportedly piling up on wharves in China, which is seeing a glut in supply, while China's trade war with the US is also being blamed.

Darrin Collett of Woodbank Trading has been riding the ups and downs of the forestry industry for 30 years and said the forestry management business had already laid off four logging crews in the north of the North Island in recent weeks - and one or two more were on the chopping block.

"That's affected 30 or 40 guys in my small environment. There's talk of wholesale stoppages and layoffs so it will affect a lot of people, for sure."

Mr Collett had just visited ports and timber processing facilities in China and met with log traders there, and he said there was a lot of worry.

"We did a circuit up there to see exactly what was going on and it's fair to say that sentiment is really poor and most of the guys said they didn't think the Chinese economy was improving."

He did not think the slump would be short-lived, as some within the industry believed. Rather, it was a perfect storm brewing on the horizon, bolstered by the trade war with America which is harming Chinese business confidence.

He had experienced downturns four or five times - but not like this, he said.

"The last one five years ago was just as savage but it bounced quite quickly.

"This one feels different. It feels that it may not bounce back and it's sort of a market reset."

One North Island contractor who did not want to be identified said it was the owners of small woodlots - farmers, and lifestyle block owners - who had turned off the tap instantly.

"Generally it's the woodlots crews which are the first to get turned off because the farmers ... as soon as they see a price drop they don't want to continue so there are a lot of guys being affected.

"A lot of truckies will be affected as well - and machinery dealers. It's going to have a fairly big impact."

Another North Island contractor who employed just five workers said they were struggling to find out what was going on.

"Then you've got the buys above us that sell the logs - they're running around putting us off or trying to make us do four days but you can't do that to your men. Your men have to have money as they've got mortgages."

The latest price drop, which happened in a matter of weeks, brought log prices down by 15 percent on a take it or leave it basis demanded by Chinese log importers.

The forestry industry contractors association said that was now spreading down to rural New Zealand and could rebound on about 200 small operators.

One said it was linked to the glut of timber heading to China from other markets, which were selling cheaper.

"They're a lot cheaper than ours and that could have a long-term effect. China's the only outfit that's been able to take enough of our wood, so going forward, who knows? Unless India picks up then we could have a few problems."

Forestry Contractors Association chief executive Prue Younger said the small firms would be hardest-hit, and larger forestry companies were expected to ride out the downturn.

She said the large corporate forest owners had their contracts tied up and might escape the worst.

"It'll be the small guys who have got ad-hoc contracts, and the small forest management companies who are servicing them with export market.

"It's going to be interesting and I think we'll see a falling-away of our small contractors."

Mr Collett said when the prices fell too low, the big companies pulled back on production but did not tend to stop.