By Liu Chen and Jeremy Rees

New Zealand should develop a trade and travel hub between China and Latin America, a conference of government and business leaders in Auckland has been told. 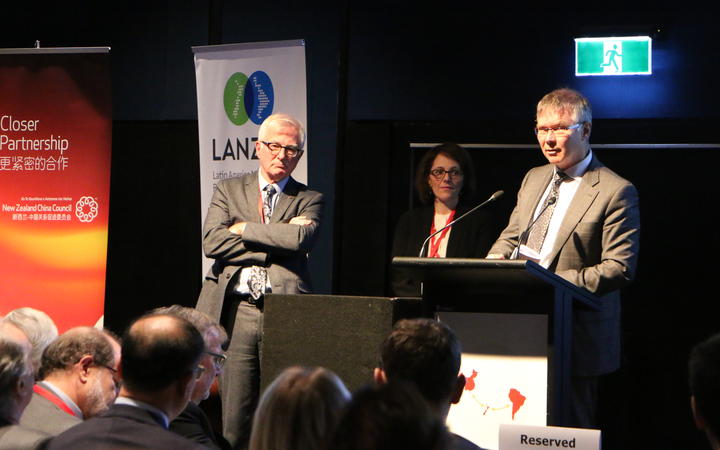 Former trade minister Tim Groser and David Parker, Minister of Trade and Export Growth answering questions. In the middle is Stephanie Honey, associate director of NZ International Business Forum, who was the MC of the conference. Photo: Photo / RNZ

"What do we need this southern hub to do? At the simplest level, the hub should facilitate seamless and convenient exchange of goods and travel for people between the eastern and western sides of the Pacific Ocean," he said.

The idea proposes to build links to Latin America, especially Argentina and Chile, through expanding trade agreements, more cultural exchanges, developing an airline hub in New Zealand and using the country's position as a way point - or "funnel" in aviation industry language - between the eastern seaboard of Australia, China and Latin America.

Supporters argue that New Zealand has a close economic relationship with China already under the 2008 free trade agreement and is now seeking better trade links with countries like Chile, Mexico and Peru through trade agreements.

A briefing paper to the conference said New Zealand had Air New Zealand and seven Chinese air carriers flying to eight different Chinese cities, and there was an opportunity to develop more air links to South America.

He also said the governments and businesses in those regions needed to work together.

Former trade minister Tim Groser said the idea was "picture perfect" for the country "to move forward", in a way which fit the government's strategic interest and priorities.

Given the idea was under the framework of China's controversial Belt and Road Initiative (BRI), Mr Groser said New Zealand needed to deal with care. As a developed country, New Zealand has less interest in the infrastructure building which has marked much of the Belt and Road discussions with developing nations.

The "boxes" included assessing New Zealand's advantages, how to get Beijing's attention and how to reduce political risk.

"As we approach this extremely important Chinese strategic initiative, the BRI, those long-standing principals and values that reflect underlying New Zealand values will be central to our participation in this," he said.

Mr Groser said the BRI initiative reflected China's growing power, the shift of tone of the relationships between the United States and China, as well as the backwash into the international trading system.

However, he said it was the relationships between the two super-powers, rather than the intrinsic nature of this initiative that made it controversial.

Professor Huang Renwei, from Fudan University, said the emphasis of the Belt and Road was shifting from broad brush design to more detail work, and from infrastructure building to co-operation, financing and co-operation agreements.

China identified New Zealand and Oceania as a place for agriculture and resources while Latin America was seen as a place for high Chinese investment and energy supply, he said.

"New Zealand is a midway point, a meeting point, between Asia and Latin America.

"It has also been a facilitator in setting up free trade agreements and could help co-ordinate a shift from bilateral agreements to multilateral ones."

"South America is a huge opportunity for New Zealand and the rest of the world. New Zealand is doing well there but there is a lot more that can be done."

Stephen Jacobi, the executive director of the New Zealand China Council, said any Southern Link initiative would need to be a partnership between government and business. Government would need to establish policies, initiatives for transit visas, slots for airlines, Customs and biosecurity regulations; businesses would then need to respond with commercial strategies to build trade on the link.