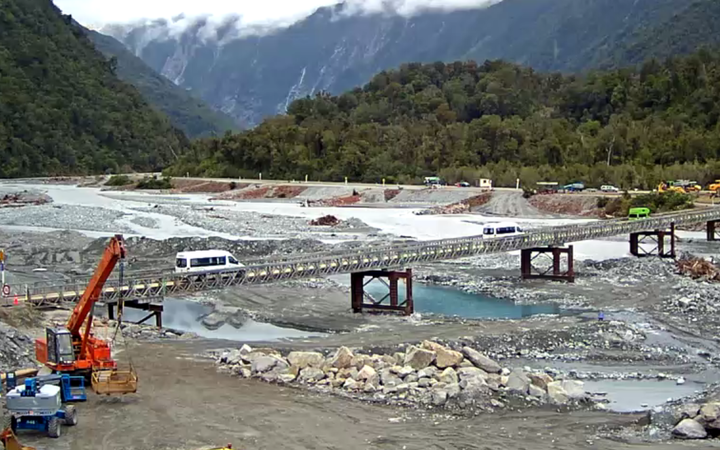 The new bridge which the Transport Agency built in 18 days. Photo: NZTA Screenshot

The region was left without the Waiho Bridge on State Highway 6 for 18 days - and foot access to both the Fox and Franz Josef glaciers remains blocked off by slips.

West Coast Tourism chair Jim Little said the closure of the bridge cost local businesses about $48 million in lost income, but an influx of Easter and school holiday visitors had set them "back on track".

He said a $41,000 advertising campaign to attract people to the West Coast for school holidays boosted spending by 22.7 percent last week.

"I know that Easter was very, very busy throughout the whole coast - and that pay mark percentage seems to prove it," Mr Little said.

Waiho Bridge was washed away in floodwaters in March, cutting off access from Fox Glacier to Franz Josef. Photo: Wayne Costello / DOC

However, Collin Robertson, who owns Ropatini's Homestay in Fox Glacier, said he hadn't recovered from three weeks without any customers at the start of April and he was worried about how he would fare over winter.

While he was fully booked over school holidays, he said he was short-staffed after losing casual employees when the bridge was closed. He said many of his guests also arrived in town unaware they would not be able to see Fox Glacier on foot.

"A lot of them don't know what has happened and it's a huge problem," he said.

He said Fox Glacier was a small town, so it became "a bit of a mission" to look after people visiting for days at a time.

Tourism operators are hopeful glacier access will be reinstated by next summer, but Mr Robertson was hoping DOC and the Westland District Council would take more action to notify people about the closures in the meantime.

"It's not going to be the best year for us operators," he said.