Cabinet ministers and construction leaders met yesterday to discuss how to solve the major challenges facing the struggling industry. 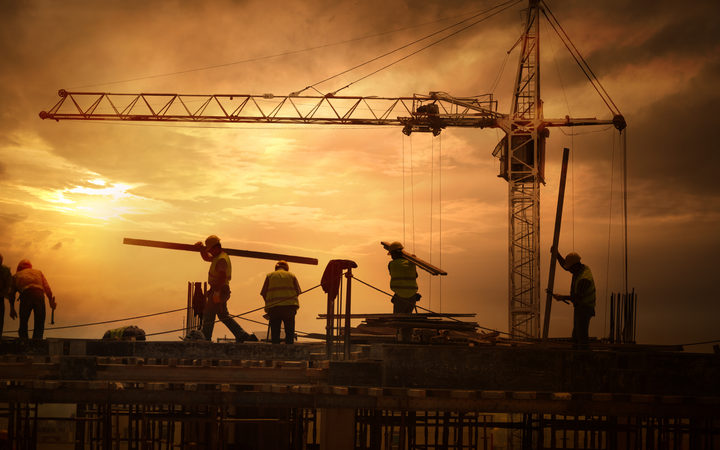 The sector has been plagued by issues related to skill shortages and receiverships. Photo: 123rf

The sector has been plagued by issues related to skill shortages and receiverships.

It also comes off the back of recent revelations that nearly a third of New Zealand construction companies are failing to comply with the new law to keep retention money in trust.

"The government is a major client in the construction sector and they can lead the way by actually sharing some of the risk with these bigger contracts," Mr Burke said.

"I don't think it's to anyone's benefit to push the contractors down to a level where major contractors are going out of the industry or going into receievership."

The flow-on effect from long-term fixed price contracts was not limited, he said.

"These are long-term projects as well, where costs are bound to rise over a period of time. Those risks have been taken on by the main contractor but they actually end up being transferred down the supply chain to suppliers and sub-contractors."

He warned that if contractors were pushed too hard, the construction crisis would only worsen.

"If the client is too tough, then people will walk away ultimately."

While negotiating better terms in long term contracts was part of the issue, another part was the focus on the bottom line, Mr Burke said.

"The tendering process has been concentrating solely on the cheapest possible price, a race to the bottom."

"They probably got a little bit bullish in terms of their ability to manage that risk, they haven't priced it accordingly, and on the clients' side taking advantage of the fact that they will find someone who's prepared to enter into that and take the risk on."

Mr Kelly said the taxpayer was already paying the price for taking the cheapest quote, and over time would get better value for money from a strong construction industry with fairer procurement processes.

"I think the Ministry of Education's issues with schools that have emerged over the last decade really is a good case in point, the taxpayer is already paying for it but it's not understood up-front."

"[Local government and government] need to have a strong confident industry that will deliver value over time. If we continue to have businesses going bust then they simply will not get competitive pricing."

He said it was agreed at the meeting with officials yesterday that the government should shoulder more of the risk in complex, long-term contracts where it was hard to assess or predict costs.

"What we're saying is we need to do some things ourselves and we have already started that - working with about 30 of the largest commercial builders to develop guidance and list awareness. And on the government's side they've committed to taking action particularly around their own procurement," Mr Kelly said.