The Ministry of Education is being blamed for a badly leaking Auckland high school and for changing contracts so that builders can wait up to twice as long as usual to get paid. 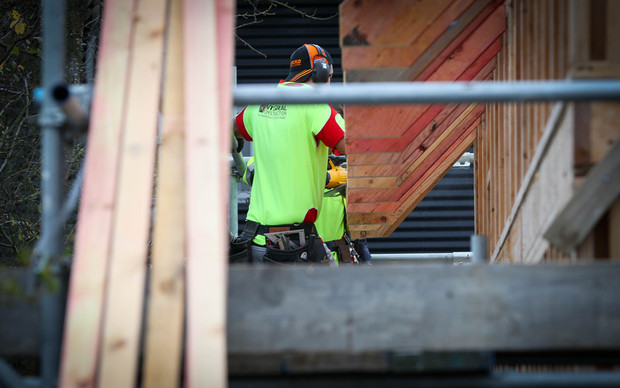 The Ministry of Education is facing criticism from builders who have complained that it has changed a contract so they can end up waiting a whole month longer for payment than before. Photo: RNZ / Alexander Robertson

The construction industry is holding these up as examples of government behaviour that's undermining builders even as some go to the wall.

Millions of dollars in contracts and hundreds of jobs have been affected by building firm failures so far this year, and the dominoes keep falling.

Geoff Hunt, who chairs the Construction Strategy Group, warns the industry's "in crisis" and that more building firms will fail, if the government allows departments to keep pushing unfair risk on to builders.

The former head of Hawkins Construction, Mr Hunt has warned the other effect will be that more leaky or otherwise deficient buildings will be built. 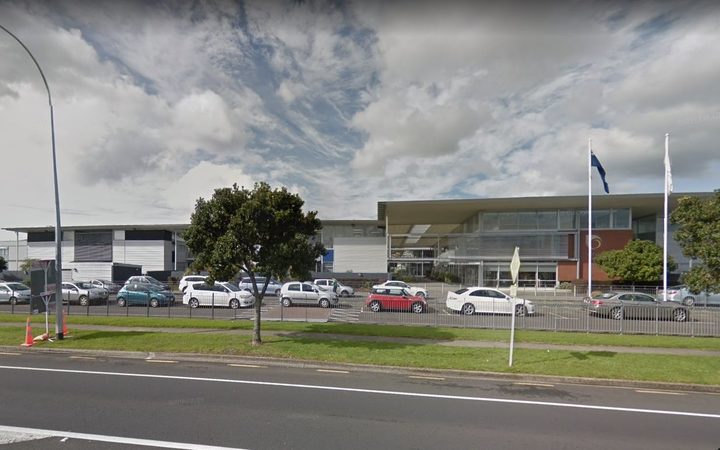 Hawkins is ensnared in a legal fight with the Education Ministry over Botany Downs Secondary College in Howick, which has leaked badly since being built by Hawkins from 2006-2009. The ministry is pursuing $13 million in court-ordered damages.

But Mr Hunt said the ministry kept pushing down what it would pay, to the point the school cost the same per square metre as an ordinary house, even though it should meet more robust standards.

"They were looking for the cheapest possible price to construct that school and that process continued even after the award of the contract to reduce the price further," he said.

"The ministry kept asking for ideas where money could be taken out.

"So for example the cladding of the building was originally Colorsteel - that got downgraded to Zincalume, a lower cost product with a lower life [expectancy] as well."

Mr Hunt said this demonstrated the approach that still prevailed in central and local government to build cheaply.

"The procurers think, go cheap, if there are problems sue the designer or sue the constructor but at least we got a bargain. It's completely wrong thinking and we'll continue to have problems so long as we take that route."

The ministry, in a written statement, said the High Court judgment said the construction of the school was defective which had nothing to do with contracting processes.

Geoff Hunt raised similar points as part of Hawkins' legal defence which was rejected by the High Court and then not appealed by Hawkins, it said.

"Furthermore, this contract was signed over 10 years ago so is not relevant to a discussion about current government procurement," said Kim Shannon, Head of Education Infrastructure Service.

The Education Ministry is also facing criticism from builders who have complained that it has changed a contract so they can end up waiting a whole month longer for payment than before.

The payment delay clause was hard to decipher, Mr Degerholm said, but he advised the contractor this was what he had signed up for.

"Programme-wise we are probably going to have some $700-750k months which could mean having to fund up to $1.5m," the contractor said by email.

"We are a medium sized contractor so $1.5m is more than we would normally have up our sleeve. Going forward we would have to price a project differently."

Mr Degerholm said that "in short, the contractor becomes the banker".

"This increases the risk because we've got a cash-starved industry running on very low margins," he said. In practical terms, a contractor would probably end up having to pay subcontractors before being paid themselves by the ministry, the opposite of 50 years of industry practice.

The contractor who came to him would not be named for fear of missing out on further government contracts.

That type of fear is a major reason why the angst over the contracts is only coming to light now, though the ministry made the contract changes in late 2016, in the interests, it said, of "transparency and consistency".

The Master Builders Association's Matthew Aileone, a lawyer, agreed the contract wording was difficult to understand, and said he too was hearing from contractors chafing under it.

"It affects their cashflow and essentially means they're left in the lurch for a long time before they get paid," Mr Aileone said.

"If you are already operating on a slimmer margin and you've got all the other compliance issues you have to worry about, yeah, this can be quite detrimental to some businesses and undermine them."

Some builders finding it 'too hard' to bid for govt contracts

"We endeavour to pay all suppliers in a more timely manner" than the new contract allowed, Kim Shannon said in a statement.

"Our biggest contractors are paid within seven days or less."

This meant about 500 suppliers and 88 percent of the total value of all invoices being paid within seven days, Mr Shannon said.

"16 percent of our contractors were paid after 30 days, due to payment queries or clarifications (that’s 5 percent of the total value of all the invoices we received)," Mr Shannon said.

The ministry controls 70 percent of education capital works spending, and individual schools the remaining 30 percent "means they are responsible for contracting and paying their own suppliers".

Contractors' payment claims had to be checked by an "engineer to the contract", with payment made in the month after that engineer signed the claim off.

The ministry expected contractors to be aware of where to look for modifications to the contract's payment terms.

In consultations over the changes in 2016, only 11 contractors out of 200 who made submissions raised issues with the payment clauses, it said. It made further changes just this month.

Matthew Aileone said he had raised concerns informally with the Education Ministry, and the Ministry of Business, Innovation and Employment, and got a good hearing - but he doubted they understood the impact on builders.

"It makes it difficult ... to build that trust. Government clients in the past have been seen as quite good to work for, but increasingly I'm hearing from members and around town that some builders aren't putting in bids for projects anymore, it's just too hard."

The previous government repeatedly said that procurement for public projects was getting better and fairer.

In some sectors, such as roads, it had, but Mr Hunt said that in most respects it had got worse.

Under the new government, officials were listening more, and the growing resistance among builders to the unfair contracts seemed to have halted or at least slowed the swing of the risk pendulum, Mr Hunt said.

However, he pointed to what was happening with the government's own procurement guidelines, which already state a core goal is to aim to benefit everyone.

"Absolutely excellent work done by MBIE - page after page they emphasise the importance of considering the whole-of-life cost. These guides are not mandatory and they're ignored by almost all government agencies."

The Master Builders said no one was forcing contractors to sign, and it was now advising them to be more careful what they signed.

All ministry payment processes were aligned with MBIE's guidelines, Ms Shannon said in a written statement.

The ministry was working with the Construction Strategy Group on the final stages of a directory of construction companies qualified to do particular work, and a pipeline of capital works projects, which would speed up tendering.

The ministry said it consulted on the contract changes with contractors including Arrow, City Care, NZ Strong, Hawkins, Downer and some Master Builders Association members, and with Matthew Aileone in June 2017.

"Several changes to our core conditions have been made over the past three years, with the latest released 1 August 2018. These changes have generally been well received by suppliers and have resulted in a significant reduction in the derogations or 'tags' proposed at tender."

More talks would take place next month, "and if the issue of payment terms is raised in this round of consultation, we will consider another change".

Editor's Note: This story has been updated with comments from the Ministry of Education via a written statement.