Significant restructuring costs are expected to result in a lower profit for the country's biggest retailer. 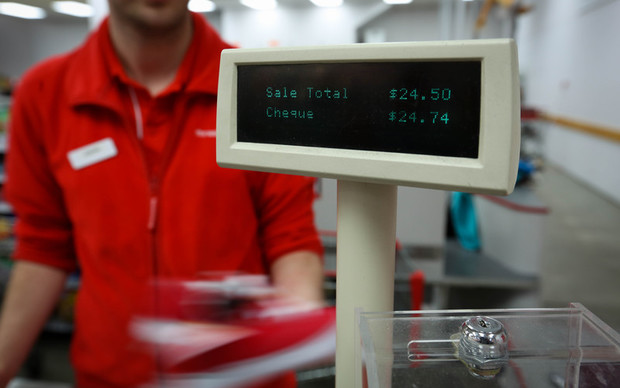 At The Warehouse Lyall Bay, Wellington for $24.49 you can buy a child one pair of pants, a tee shirt, a jersey and some shoes. Photo: RNZ / Alexander Robertson

The Warehouse Group, which operates the Warehouse, Red Shed, Warehouse Stationery, Noel Leeming and Torpedo7 stores expects an adjusted half-year profit of between $32 to $35 million in the six months ended January.

That would be down 22 to 28 percent on the same time last year.

The company has been working through a restructure to improve its profitability and performance in a tough bricks-and-mortar environment and growing competition online, including from Amazon.

It reported lower same-store sales over the critical Christmas trading period for the Red Sheds, which were moving to what it called an every-day low price strategy.

The group said Warehouse Stationery's performance should improve as students head back to school, while Noel Leeming was performing well and Torpedo7 had been improving.

"We have a long way to go, but these are encouraging signs," he said.

"H1 (half-year) trading to date has confirmed for us that our customers like and have responded well to our pricing and product changes," he added.

The company will provide full-year earnings guidance in March.