Rural shopkeepers are being told not to expect a spend-up from dairy farmers for at least a year despite the overall rise in global dairy prices.

While prices fell slightly at the global dairy auction earlier this week, the price has risen significantly overall during the year. 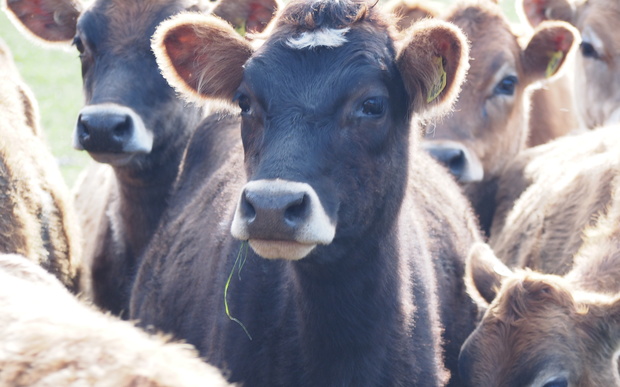 Farmers were keeping a tight control on costs because they were not getting the money in yet, said Chris Lewis. Photo: RNZ/Susan Murray

After more than two-and-a-half years of belt-tightening to cope with shrinking incomes, farmers are welcoming the improvement.

Waikato farmer and Federated Farmers provincial president Chris Lewis is not getting carried away though, since the bulk of the money won't roll in until the second half of next year.

"At the moment it's just business as usual; keep control of the costs. I'm sure there's a odd indulgence on the farm. But generally speaking farmers are keeping very tight control because they're not just getting the money in yet," Mr Lewis said.

"Yeah pretty much. On the cautious side we're sticking to our budget this year and not varying from it. (We'll) see what happens in the next four to five months regarding next year's budget and cashflows."

Chris Lewis said retailers should temper any expectations they have may of a spend-up.

"Shopkeepers in town are looking forward to a bit more boost in spending, but I think they'll have to wait for another 12 months to be honest. It'll be next year's Christmas (before) they'll be more optimistic."

It is the conversations with their banks that matter most to farmers', with dairy debt totalling about $40 billion.

A recent Federated Farmers survey highlighted some of the tensions, particularly for sharemilkers.

Nearly one in five felt they were coming under undue mortgage pressure from their bank, and one in eight expressed dissatisfaction with their bank.

Sharemilker Jono Bavin said repaying debt was a priority for many.

"I haven't had that conversation (with my bank) yet but we will be in due time. But the plan is any extra cash that we've got through this payout is to repay debt."

While farmer spending is likely to remain relatively subdued for the next year, confidence about the future is important.

PGG Wrightson general manager of retail and water Stephen Guerin said whether farmers decided to keep milking in late autumn would be an important gauge of optimism.

"Milk production's back about 20 percent. With the higher returns, will customers make that decision around extending the milking season through or their regrassing options? We'll see those decisions being made through that March/April window."

The rollercoaster ride in prices also serves as a warning.

An honorary professor of agrifood systems at Lincoln University, and now an independent consultant, Keith Woodford, said while European production had fallen about 3 percent, it could easily rebound in response to higher prices.

"They (the Europeans) can easily ramp up that to 3 percent again and go a little bit above that. That doesn't sound spectacular, but at the margin that can be important in terms of the final price."

Shopkeepers may need to be patient a while yet.