China's economy grew by 6.9 percent in 2015, compared with 7.3 percent a year earlier, marking its slowest growth in a quarter of a century. 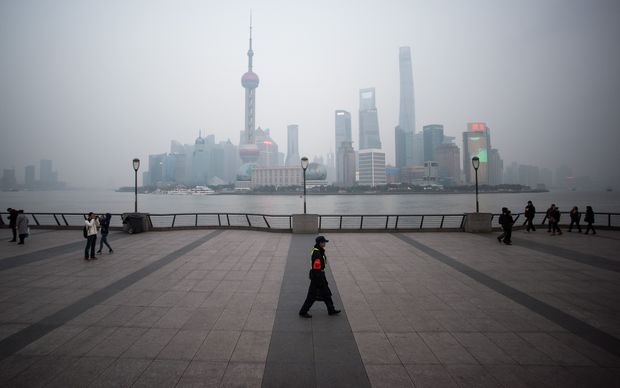 China's growth, seen as a driver of the global economy, is a major concern for investors around the world.

Beijing had set an official growth target of "about 7 percent" for the world's second-largest economy.

Chinese Premier Li Keqiang has said weaker growth would be acceptable as long as enough new jobs were created.

But some observers say its growth is actually much weaker than official data suggests, though Beijing denies numbers are being inflated.

Analysts said any growth below 6.8 percent would likely fuel calls for further economic stimulus. Economic growth in the final quarter of 2015 edged down to 6.8 percent, according to the country's national bureau of statistics.

After experiencing rapid growth for more than a decade, China's economy has experienced a painful slowdown in the last two years.

It's come as the central government wants to move towards an economy led by consumption and services, rather than one driven by exports and investment. But managing that transition has been challenging.

Some argue that China's focus on creating an economy driven by consumption is misplaced. They say as the country attempts to rebalance its economy, it should focus on productivity in order to sustain high growth.

"While higher consumption can support growth in the short run, there is little in economic theory that emphasises the expenditure side of GDP as a driver of growth," HSBC's John Zhu said in a note.

Mr Zhu also said that China's current stage of development would require more investment, not less, and that the country would rebalance naturally towards consumption and services in time.

"Pushing the economy along those paths too soon would be dangerous," he said.

China's headline annual economic growth numbers are important to the rest of the world - but so too are other monthly economic data as they can provide a more in-depth look at the economy and where it's heading.

Monthly industrial production (IP) and retail sales numbers for China were also released on Tuesday, with both December numbers coming in just slightly worse than expected.

"[The] health of the labour market, retail sales and industrial production data are all key indicators for growth," said Catherine Yeung from Fidelity International in a note.

"Like any economic data, it's important to look at the themes and trends that drive them and not just the headline figure.

"When you look at China with this lens, we're not seeing a meltdown, just a slowdown," she added.

Others said Tuesday's numbers were actually a relief.

"GDP was generally in line with what many, including the IMF, expected," said economist Tony Nash.

"China's growth in 2015 was equivalent to the size of the entire economy of Switzerland or Saudi Arabia," he said. "That's not an easy feat and shows the magnitude of the accomplishment," he added.