Fonterra has bought an 18.8 percent stake in China's Beingmate Baby and Child Food Company for about $754 million.

The deal is part of a joint venture to distribute Fonterra's infant formula brand Anmum in China. 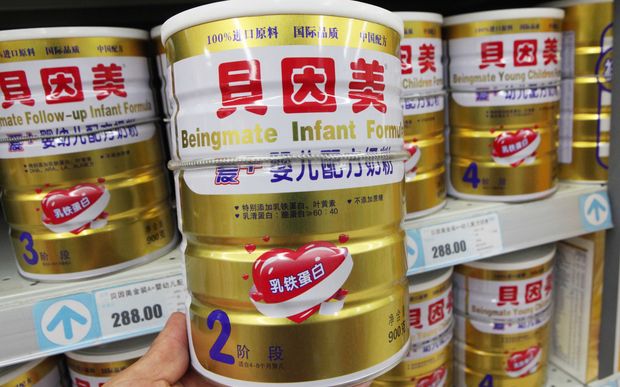 Fonterra has bought a stake in Beingmate Baby and Child Food Company for about $754 million. Photo: AFP

The dairy co-operative acquired 192.4 million shares at 18 renminbi per share, or 3.464 billion renminbi.

Fonterra had hoped to buy a 20 percent stake in the Chinese infant formula manufacturer.

Its chief financial officer Lukas Paravicini said the company was extremely satisfied and confident that the partnership could proceed with the smaller stake.

He said the partnership would open doors in China that Fonterra probably could not do on its own, particularly as it would be costly to set up a distribution network to match Beingmate's.

The transaction will close in the next couple of days.

In the meantime, Mr Paravicini said, Fonterra and Beingmate will begin the next phase of the partnership, which includes establishing a joint venture to purchase the Darnum plant in Australia, and finalising the details of the distribution agreement over the next few weeks.

Mr De Petrini will return to France to take up an executive vice president role with his former company, Danone.

The heads of the regions will report directly to Fonterra CEO Theo Spiering until the beginning of August, when a replacement is expected to have been recruited.