SkyCity Entertainment's share price has fallen after the company dropped its push for Government money to help build its planned convention centre in Auckland.

The company estimated the centre could cost up to a third more than the $402 million originally budgeted for and had wanted Crown funding. 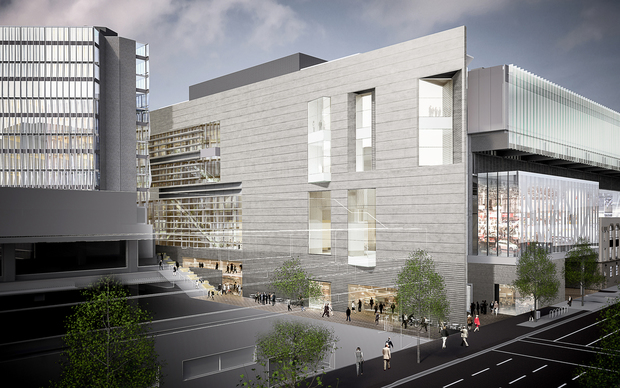 On Saturday, the casino operator which won the right to build the centre in exchange for more pokie machines and other concessions, accepted the Government would not help bridge the shortfall.

SkyCity did not walk away completely empty-handed, however, securing an agreement to take control of the procurement process, which chief executive Nigel Morrison said should cut costs and save time.

He said Sky City was committed to building a landmark convention centre, and rejected widespread criticism about the process of negotiations with the government.

"We've acted with absolute integrity and transparency as best we could over the totality of this period, given we were in negotiation with the Government over an issue.

"As the Government indicated, they couldn't talk openly about some things while we were having these negotiations - clearly we couldn't either," he said.

"I know some of the media have gone off and grabbed certain things but I think to be absolutely honest with you I am absolutely totally comfortable with our integrity in this matter."

At midday today, SkyCity Entertainment's share price was down 11 cents to $3.80.

Timing up to SkyCity

The Auckland Council says the ball is is SkyCity's court when it comes to timeframes for the project.

Mr Morrison has said the company will try to keep the cost to a reasonable amount, but if it cannot, a significant re-design of the centre and its hotel could be necessary.

The company lodged a resource consent application for the original project in December.

Auckland Council says it is up to SkyCity to decide whether the application needs to be tweaked, changed or withdrawn and a new consent sought.

For that reason, the council says, it cannot give an indication of when a consent hearing might be held.