Millions of dollars of deals in dairying and telecommunications and food research have been announced during the Chinese President's just concluded visit to New Zealand.

Among deals ushered in by Xi Jingping today was the massive extension of the 4G network under an expanded partnership between Spark and the Chinese telco Huawei. 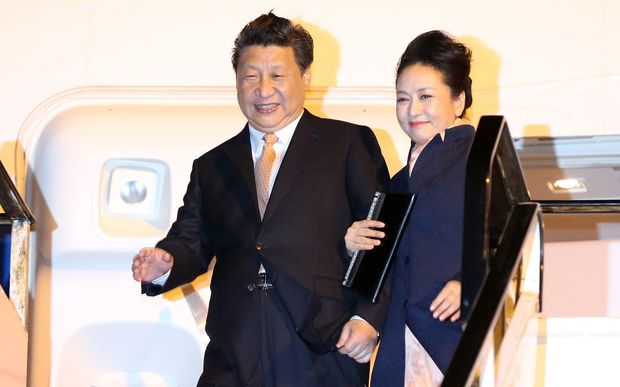 Xi Jinping and his wife Peng Liyuan as they arrived at Auckland International Airport. Photo: AFP

Huawei has been blacklisted from the United States over espionage fears, but Spark's chief operating officer David Havercroft is confident there are no security worries.

"At the end of the day, they are equipment in networks, and it's much more important who's running them for you and how you're controlling them."

Spark and Huawei say the new technology will increase 4G range in the countryside and also boost penetration in office buildings and other congested areas.

"Obviously we will get much better margins from this product [UHT milk] and adding more value to our milk and building sustainability over time."

Three new research collaborations were signed today - one between Lincoln University and Yili Industrial Group, Auckland UniServices and Yashili, plus the opening of a kiwifruit virtual laboratory - a collaboration between Plant and Food Research and the Sichuan Provincial Academy of Natural Resources Sciences.

Another collaboration under way for some years is on cancer drugs and stem cell treatments at Auckland University's Maurice Wilkins Centre for Molecular Biodiscovery.

Professor Peter Shepherd said China had ambitious goals and funds for drug development, and New Zealand had expertise to match.

He said the parties had been working on agreements for "commercialisation" of the research - how to equitably divide the profits from the new drugs, which may be in production within a couple of years.

"There's very significant potential not just to access the Chinese market but the world market as well."

However, intellectual property lawyer Clive Elliott said businesses looking to expand into China have to be mindful of the risks.

"You might find you've developed quite a good brand and then you move to China and find someone has actually snuck in and registered your trade mark before you and you then have a problem trying to basically unregister that mark in China, and sometimes people have failed."

Another announcement is that a third Chinese bank, the Bank of China, has been registered in New Zealand. Its directors include former National ministers Ruth Richardson and Chris Tremain.

"Far from acting to limit foreign investors buying up property - a significant factor in driving up Auckland house prices - former top National Party officials are aiding and abetting the process."

Mr Hague said the Government was opening the door to more Chinese property speculators with the registration of a third Chinese bank in New Zealand.

Given Auckland property prices - which have rocketed 33 percent since 2011 - Bank of China customers would be putting their capital there, he believed.

Mr Hague said many other countries, including China, had limits on non-residents buying residential property and New Zealand should consider it.

Labour Party leader Andrew Little, who met the Chinese president today, said they discussed the importance of channelling investment into productive areas rather than just housing.

New Zealand exports to China are set to hit $30 billion within five years.