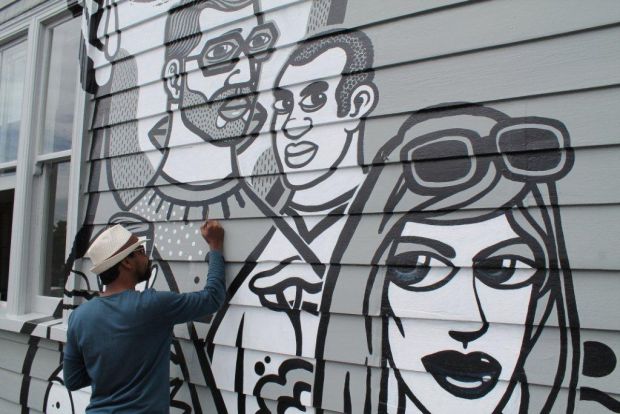 Auckland is quite small compared to Mumbai. The total population of Mumbai is more than four times that of the whole population of New Zealand. The good thing here is that's its a small place so people care, people know each other. In Mumbai there are too many people to care, there are so many people. Here people get talking, they're friendly, they'll chat to you. In Mumbai there's visual overload on the streets but here, the roads are sparse. Maybe K'Road, or some of Ponsonby Road give a slight glimpse of what Mumbai is like. 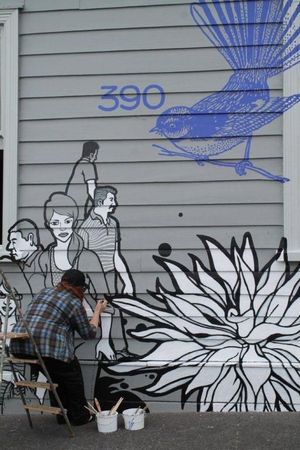 On the busy corner of Elgin Street and Great North Road in Grey Lynn world famous Indian artist Sameer Kulavoor is describing the massive differences between Mumbai and Auckland that really struck him upon arrival during his first visit to our country.

Zoomslide, an Auckland motion picture studio, has embarked on an innovative public art project this December. The end result; a giant mural, an early Christmas present to the people of Auckland and Sameer's has just two weeks from start to finish to complete the project. It's been action packed first visit for Sameer.

Unassuming in a straw fedora hat with paintbrush in hand, Sameer has fallen in love with our great cultural differences. With fresh eyes he's rapidly interpreted Auckland in ways we probably can't see ourselves, onto the sprawling mural across the face of the new Zoomslide premises.

But how come the connection with Auckland? His old friend from Mumbai, Hitesh Chheda (who now works for Zoomslide as the head motion graphic's artist) first mentioned collaborating with Sameer to Zoomslide Producer/Partner Mark Summerville. Mark loved the idea, and now Sameer is here creating this mural for the exterior walls of their new premises, an extension to the old. Mark tells me (paintbrush in hand too, as one of the team of assistants racing against the clock) that they are thrilled to have someone as talented as Sameer creating this public art work.

Sameer's resume is impressive; illustrating for Rolling Stones Magazine to fashion guru Paul Smith, his art spans graphic design, self-published art books and zines to advertising and festivals. Sameer's own independent studio company Bombay Duck Designs (BDD) was founded in 2008. BDD's images utilise all forms of medium and have suited international music and cultural festivals. As an illustrator, Sameer has worked on brands like the BBC, Chivaas Regal, Honda, and Virgin Atlantic. His work has been recognised globally and he's the co-founder and co-curator of 100%ZINE - Indian Visual ArtZine.

Back to the mural in Grey Lynn, maybe not Mumbai but definitely a busy and iconic suburb of Auckland city:

It's like a diary I've kept and I've put the diary on the wall; it's a lot of scattered information, impressions. The day I arrived I was taken to the Wellington Ukelele Orchestra.  I was also taken to watch the arrival of the five wakas and the porwhiri at Ohaku Bay, it was my first time to see a haka performed. I really liked it, their energy is immense. 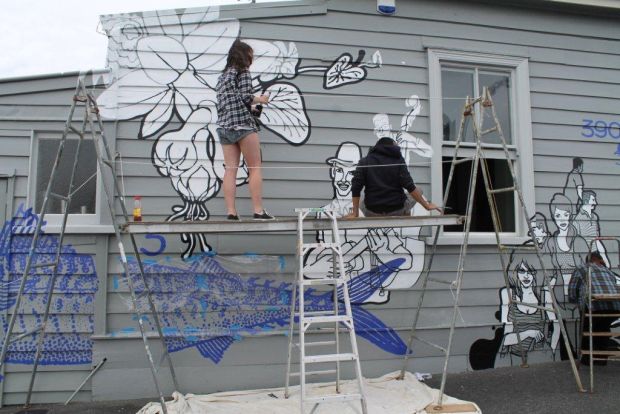 Painted in Jackson's purple, white and black, the stripped back monochromatic colours lend themselves to Sameer's graphic style. He's being assisted by three senior art students from Western Springs College. Working as Sameer's interns, all three are young women passionate about art and really enjoying the opportunity to test their abilities in such a large street art project. The entire staff at Zoomslide have pitched in after hours too, to make sure the project is completed by 16 December 2014.

So when I went to Titirangi I found a classic old text book. The illustrations do have a relevance to my experience here, it was a very tattered old text book but it's part of early drawings of NZ's flora and fauna ... This is a pohutakawa ... these are drawings of chimneys ... these people are from Grey Lynn Festival ... a lot of Polynesians, a lot of Japanese people, Auckland is very multi-ethnic.

And the mural is materialising in front of me even during our interview. It's improvised, spontaneous, it's Sameer's first and lasting impressions ... and it's wonderfully permanent.