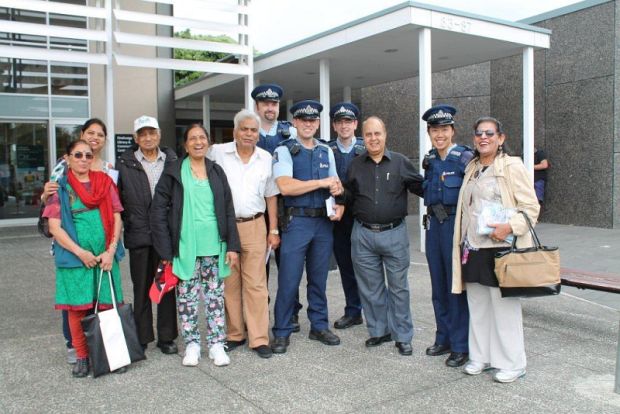 They're being recognised for the valuable contribution they make to our communities, particularly in keeping our communities safe and working in partnership with the Police.

It was packed to capacity at the Fickling Centre in Mt Roskill, Auckland where 272 Asian volunteers with the NZ police were being awarded certificates of appreciation. The volunteers were made up of 4 groups from 26 different cultural backgrounds, speaking 47 languages. Correspondent Justin Gregory attended and heard from Inspector Naidoo just why this army of volunteers are so valued:

We have the Community Safety Ambassadors, senior citizens who walk with our police on the streets, Auckland Safety Patrols (youth who come from 26 different nationalities, providing language support) and International Student Ambassadors and "Uncles and Aunties" (Community Leaders who provide mentoring for the international students).

I decided I needed to go on the beat in South Auckland to learn more too, so I joined a gathering at the Onehunga Library where around 40 senior citizens from the Indian and Chinese communities were being briefed by Asian Liaison Officer for Auckland City District, Jessica Phuang, QSM.  She told me why these volunteers inspired her so much:

When four police officers turned up with boxes of fluorescent yellow jackets and safety awareness pamphlets this group of senior citizens transformed themselves into Community Safety Ambassadors.

The four police officers took one large group each through the Onehunga Township as they did a flyer drop to businesses and the public in the area. Team Leader Constable Donald Allan explained their holiday season messages:

We talked about the awareness around new reduced alcohol limits, education about the four kilometer speed tolerance and red light means stop campaign. Don't drink and drive. It's all about road safety messages this summer. Hopefully that message will get across and have some sort of impact. 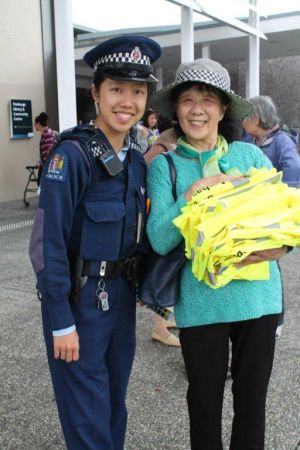 One of the four police officers is Chinese herself. Constable Winnie Kam explains why there is great need to utilise this army of volunteer Asian senior citizens:

They are acting as a bridge between the public and the police. It's been a very effective way of getting the message across within our Asian communities. Within our Asian culture we have big respect for the elderly. Our young people will listen to them. We have extra eyes and ears on the street. It is a win-win situation.

It felt like a fast moving military exercise, running hot on the heels of these smiling senior citizens. One feisty  man from the Indian community, Subhesh Rikhi kept Constable Duanne Deere on his toes as he led his group, making me wonder if in fact Subhesh was really in charge:

We want to help the police, we want to be their ears, eyes and hands on the streets of Auckland. The Police need our support and we have the time to help them. We love doing this job!

The exuberant army in bright yellow flitted from shop to shop and chatted in Mandarin or Hindi to respective shop managers while Constable Deere and myself struggled to keep up.

Constable Deere explained that the presence of these Community Safety Ambassadors helps to break down language and cultural barriers and also negative perceptions of police within the Asian community. These ambassadors put a familiar Asian face to messages from the police, telling their community that the police were not to be feared. They help turn around the negative stigma that the police may have had historically for new migrants back in their countries of origin. 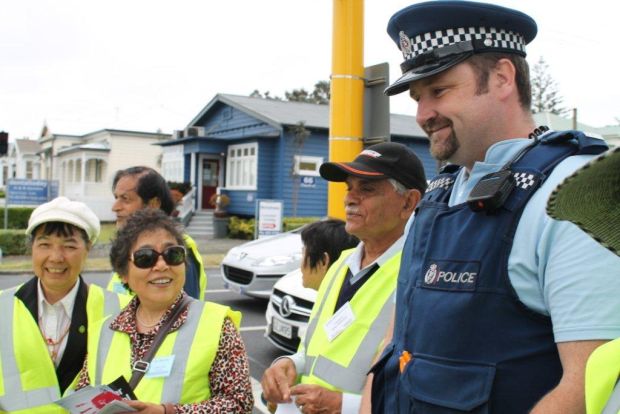 Catching our breath back at the Onehunga Library team leader Constable Donald Allan takes time to thank the volunteers amongst laughter and hand shakes.

One thing for sure, this enthusiastic army of beaming elderly Chinese and Indian grandmothers and grandfathers will be back in force and on a streets near you ...!

And that's my final Voices programme for the year. If you’d like to know more about the Asian Volunteers with the NZ Police or volunteer yourself and give your time to help the police in our communities, check out their website: New Zealand Police

Voices will be back on the 19 January 2015. We'll be bringing you some programmes covering issues around the exploitation of foreign students in our country and what kind of damaging impact this might have on our economy.