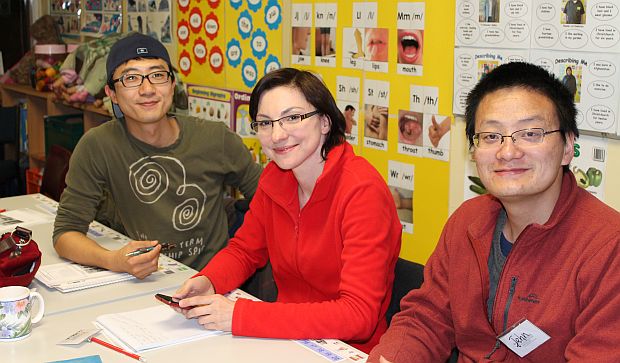 "No worries," might be at the top of the list, but "sweet as" isn't far behind. International workers have flooded into Christchurch to help with the rebuild and learning the local lingo is a major priority. At a night class, run by English Language Partners, they describe common phrases or slang they've heard on construction sites and discuss workplace scenarios. But who are these workers, what jobs have they found and what do they think of their new home? 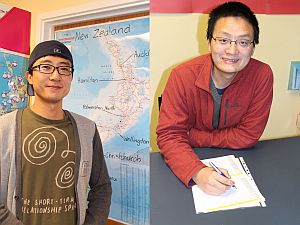 "Steve" Lee hails from South Korea and works in a health sector, caring for young, autistic men. He says he has adopted an English name so people can relate to him more easily. He admits not everyone back home understood his decision to seek an OE in quake-battered Christchurch. "Most of my friends said 'Why? Aren't you scared?' or 'It's a dangerous place'."

But he says, given his career choice, he believed there would be people in the city who could benefit form his help. He's also been impressed with the community's hope for their city, in the face of the destruction wrought by the earthquakes. "People want to rebuild it, people want to survive here. Of course there must be some people who left but I found hope here." And he says his initial concern about the activities available for young people (or a perceived lack thereof) has faded. He now believes Christchurch is a welcoming place where locals willingly share their lives with newcomers.
Picture: Steve Lee from South Korea and John Liu from China

Remigiusz Goeębiowski and his girlfriend, Izabela Wojcik, have come from Poland looking for an overseas experience. He is a tiler who has found work on building sites while she is working in administration. For Remi the language of the construction site has been a revelation: "I think they have some kind of special way of talking, maybe a kind of slang so it's not just English, like classic English." 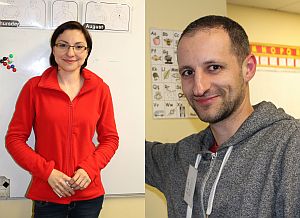 But he says his co-workers have been helpful and, speak to him slowly, using "more official language". He believes the Rebuild is progressing well but recognises trends he's seen before during Poland's building boom in 2005. He says some small companies may be trying to expand too quickly and, whilst he's had no problems himself, he says some workers may be being treated unfairly.

Also studying with the group is John Liu from the south of China who's come to Christchurch for a job in mechanical engineering. He says he's learnt English for years but the class is helping him learn how to speak "politely" and to convey suggestions to his boss with diplomacy using terms such as "maybe" and "I guess". And whilst he finds the Christchurch winter "just so cold", he's keen to stay on if he can afford to meet the rising house prices.
Picture: Remigiusz Goeębiowski and Izabela Wojcik of Poland

As they get to know their new city, some have forged friendships within the class itself, meeting up for coffee and drinks outside their weekly session. Says Izabela Wojcik: "This class is wonderful, it would be great to have it be more than once a week but it's better than nothing."