The Ultimate goal is to guard the mauri of Paraninihi, to continue the work so Paraninihi can stand as a leader for iwi of Taranaki.

Storytelling is not an easy task if you have the job of keeping a room full of pre-school kids and young children entertained and engaged. For Māori language proponent Tamati Waaka, storytelling is a skill that has become a bit dormant and while it can be seen and heard at Marae, it’s not practised openly in the community. It’s the reason why he’s involved with Te Reo Wainene o Tua – The Sweet Story of Yesteryear, a Mā te Reo funded kaupapa where it’s fluent te reo māori Storytellers use familiar māori words and robust expressions to tell stories. Justine Murray sat in one of the sessions.

This is telling our stories in te reo.... it’s a whakangahau or a light way to get our stories across  in te reo māori. It is through Nga Kōrero tuku-iho or our Pūrākau that learning is involved. It revives old stories and old traditions of story telling, which has been dormant for a while.

I know every marae has an uncle who can tell a mean story, but is it a  formal story for the purpose of holding old kōrero? I would say no, its just to make us laugh. So this is about getting all that together, the entertaining side, the story telling side and of course the te reo side  for our tamariki.

The Call of the Kōkako may once again be heard in North Taranaki, fifteen years after the Kōkako Tamanui was removed from Moki Forest. In 1999, Tamanui was moved to the Mt Bruce Native Wildlife Reserve to join their breeding programme. Tamanui went on to have 22 offspring. Northern Taranaki iwi Ngāti Tama pledged that when the Paraninihi forest was safe they would bring his whanau home. Tasked with the eradicaton of pests is Tiaki te Mauri o Paraninihi Project Manager Conrad O’Carroll, he sets out into the bush each week to cut tracks and set up the trap networks, he’s hopeful that the Kokāko will return in 2016, as he explains with Justine Murray.

We should be finished the trap network for intensive pest control early next year then we will run that trapping and baiting regime to get those low levels, then we will look getting the birds back in 2016 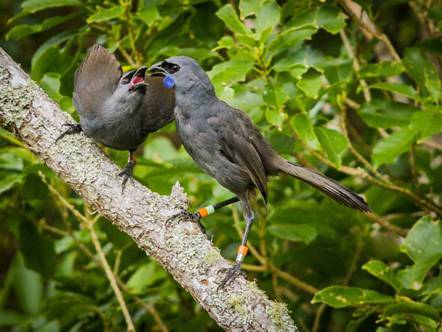 Te Rae, the daughter of Tamanui feeding one of her daughters. Photo: Martin Sanders, supplied by Puke Ariki Museum.

It has a hive of activity at a Wellington Marae when they ran their emergency exercise on Saturday November 22nd 2014.  The whanau at Nga Hau e Wha o Paparārangi set up their wharekai as a welfare centre in the event of an earthquake. Since the first mock centre was covered on Te Ahi Kaa in 2012, the Marae collective, made up of nine Marae in the Wellington region have tweaked and refined their processes. It all culminated into a community mock earthquake emergency scenario that involved 30 volunteers, local doctors and pharmacists.

We do it for every marae  (in the collective)  it's about evaluating what was good and what was not so good because we all learn form each other. Last time we had tents out there and it blew a gale…..so we are a bit crammed in here, but that’s okay, we have catering here with Joe Mcloed, it is what it is……for next year we have to get a supply of food, we’ve done the risk analysis,  we need to be able to cater for three days without any help from anyone else. 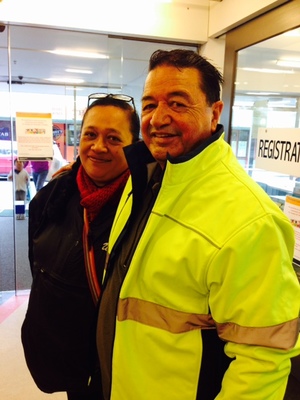 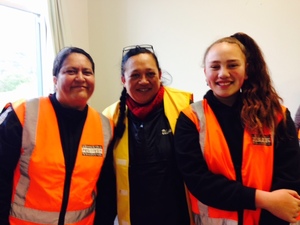