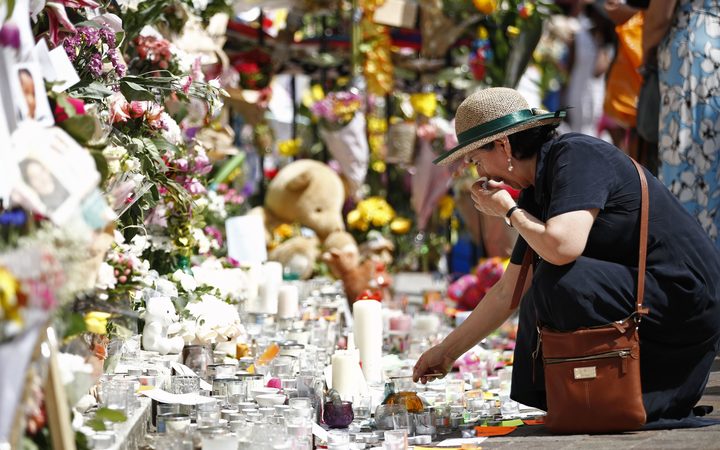 A woman lays flowers in tribute to the victims of the fire. Photo: AFP

The Telegraph’s Harry Yorke has the latest on the tragedy and the political fallout, as well the news of a man being imprisoned for posting images of fire victims on social media.

Police Association President Chris Cahill responds to a letter from a police officer that claims young Auckland police officers are leaving the force - because of the city's house prices.

A weekly digest of the events in Parliament.
This week: Daniela Maoate-Cox and Phil Smith investigate the annual face-off between the Executive and the Parliament when government ministers are required to turn up to Select Committees and defend their budgets. 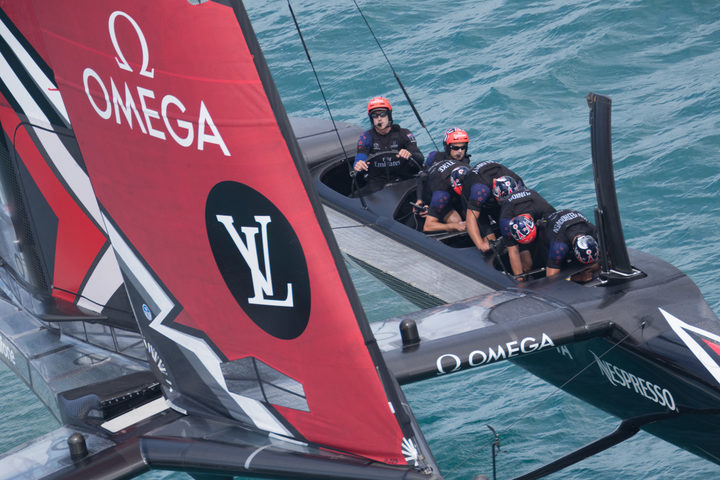 Team New Zealand had two wins from two this morning in Race 1 and 2 of the America's Cup. RNZ’s Todd Niall is in Bermuda and updates us on today's racing. 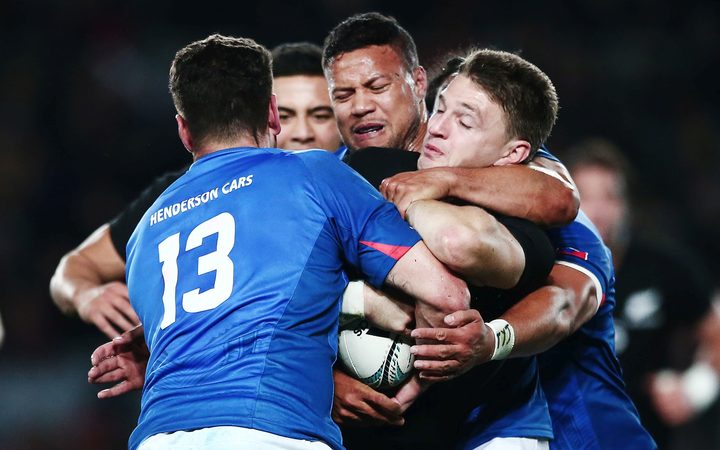 Beauden Barrett is wrapped up by Alapati Leiua and Kieron Fonotia during the Pasifika Challenge test between the All Blacks and Manu Samoa. Photo: PHOTOSPORT

Rugby journalist Mark Reason takes a swipe at the TMO after 3 international games were played in New Zealand this weekend and looks ahead to the first Test against the Lions next week. And he asks, was Samoa robbed?

8:09 Insight: The Changing Face of Sport in New Zealand 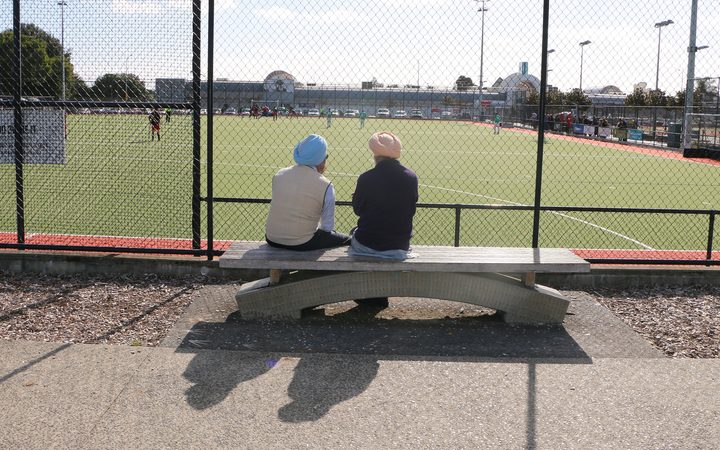 Sport is part of our national identity. But is immigration changing the sporting landscape in New Zealand? Will rugby still be our most popular sport in 20 years, when, according to projections, nearly a quarter of the population will be made up of Asians? Bridget Tunnicliffe explores how major sports are responding to this changing culture and the new life Asian sports are breathing into the New Zealand's sports scene.

8:40 Future of our oceans: Rochelle Constantine and Simon Thrush

The United Nations Ocean Conference was in New York earlier this month and Conservation Minister Maggie Barry put out a release after attending saying she was pleased with New Zealand's commitment to protecting, conserving and sustainably using our oceans and marine resources. But Rochelle Constantine, a senior lecturer in the School of Biological Sciences & Institute of Marine Science, says it will taking more than banning microbeads to save our sea. She’s joined by Simon Thrush, head of Auckland University's Institute of Marine Science.

Mediawatch looks at TVNZ’s big-budget multi-media effort this week to force us to face the future. Also: Al Jazeera caught in crossfire and rows about America’s Cup coverage.

David Hall is a senior researcher at the Policy Observatory at AUT and editor of Fair Borders, Migration Policy in the 21st century. He discusses New Zealanders’ changing attitudes to immigration. 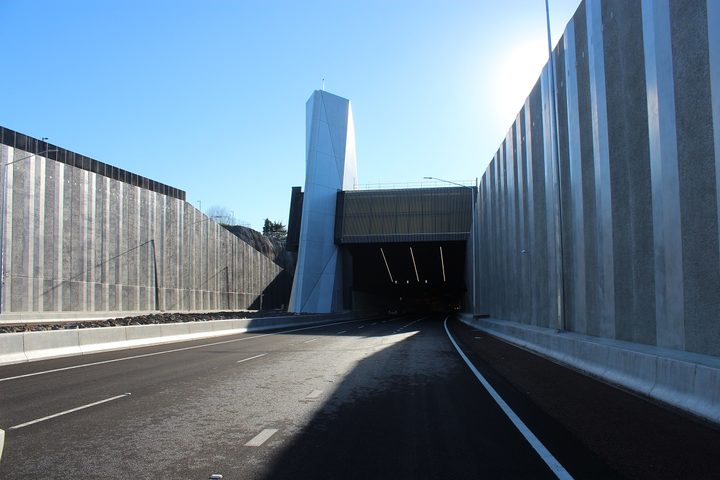 Thousands of people will walk through Auckland's $1.4 billion 4.5 kilometre Waterview Tunnel today after an official ribbon cutting ceremony by Transport Minister Simon Bridges. It’s been five years in the building, employed 1100 people and required 800,000m3 of soil to be removed by a massive bore machine. The turnout for the five free open days through the twin tunnels is the city's largest since 106,000 people walked across the Auckland Harbour Bridge before it opened in 1959. 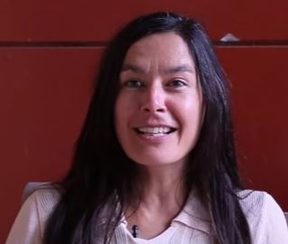 In 1929 the government held an inquiry into the employment of Maori in market gardens. It was to deal with what one paper at the time called “the Maori girl” problem - Chinese market gardeners and their Maori workers falling in love. Romance sometimes blossomed nevertheless and playwright Mei Lin Te Puea Hansen is living proof of that. Her play The Mooncake and the Kumara, being performed during Wellington’s Kia Mau and Auckland’s Matariki festivals from next week, explores this little-known history. 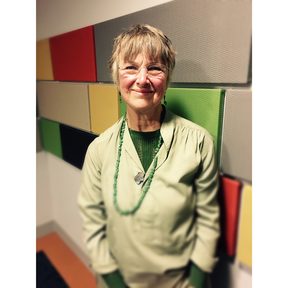 A group of prominent Kiwis dissatisfied with the government's efforts to reduce climate change … is taking a different approach to get New Zealanders on board with their vision for the future. They’ve drafted a Climate Declaration for everyday New Zealanders to sign as a commitment to doing their bit. Chair of the group Dr Joanna Santa Barbara explains why it’s needed. 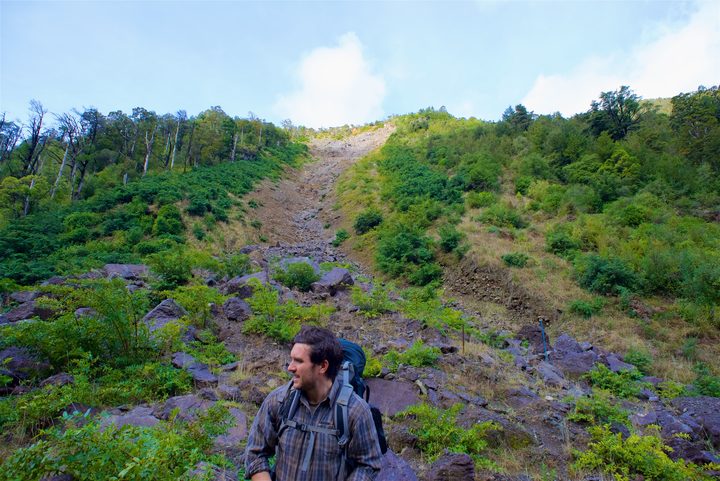 For its supporters a road connecting the Nelson region to the West Coast is a lifeline that could revitalise the West Coast economy; for its critics it environmental vandalism on a massive scale.
Jonathan Carson is a reporter on the Nelson Mail and he recently completed  the three day  Wangapeka tramp – which follows the same path as a proposed road through the Kahurangi National Park – to see what will be lost if the highway is given the green light. 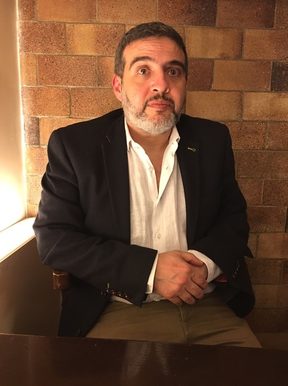 Ghassan Abu Sitta is a plastic surgeon based in Beirut. He's worked in Iraq and Gaza and was the organiser of a recent conference on the Ecology of War which heard that antibiotics have become virtually useless in war-torn countries like Iraq.

At the age of 22 Niuafe Malupo opened his own cake business Niu Cakery in Auckland. The talented cake decorator taught himself how to create spectacular cakes after growing up as one of six children and being his mother’s “kitchen assistant” while she was baking for the family. A year on Niuafe, aka Junior, talks about the extraordinary demand for his cakes, the power of Facebook and Instagram in business, and how his mother Olga is his right-hand woman. 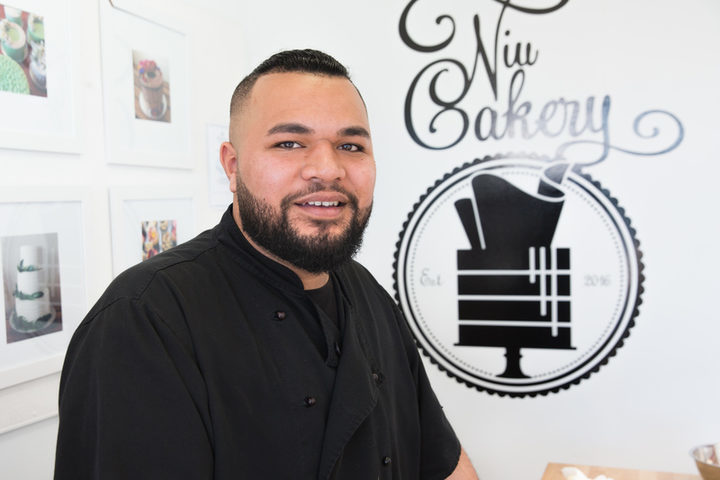 Niuafe Junior Malupo, 23, opened Niu Cakery as part of a dream team with his mother. She does the baking and he decorates the cakes. Photo / Claire Eastham-Farrelly 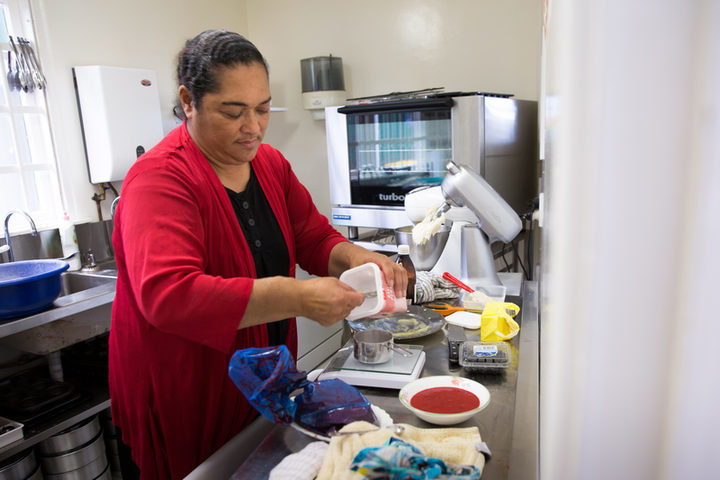 Niuafe's mother, Olga Williams, taught him how to back but he taught himself how to decorate. Photo / Claire Eastham-Farrelly 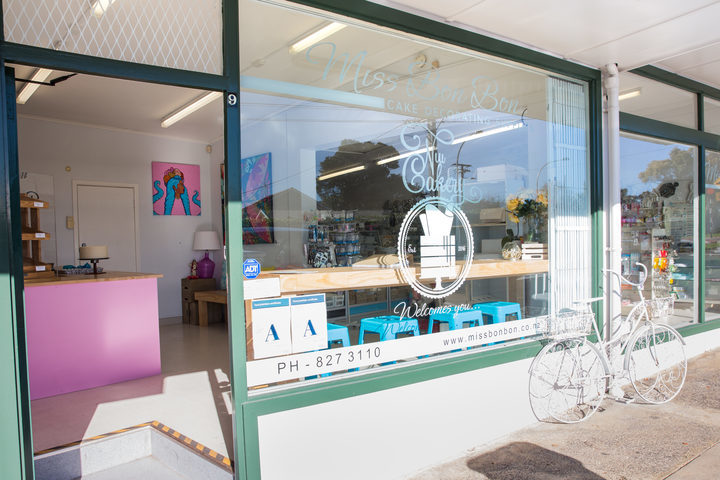 The storefront in New Lynn has been open since mid-August 2016. Photo / Claire Eastham-Farrelly 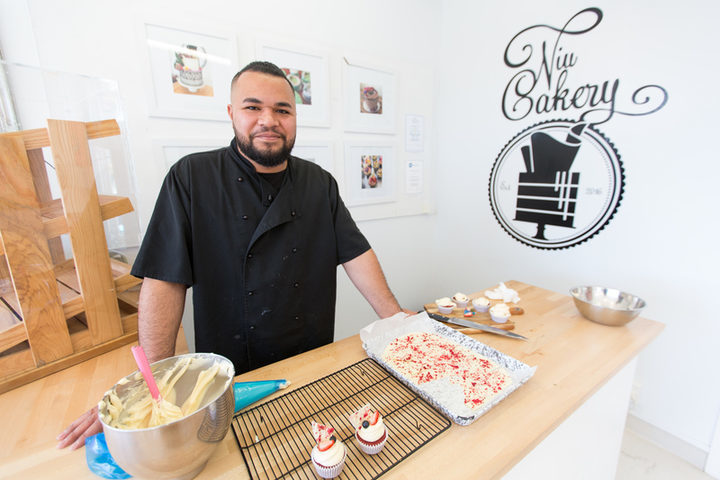 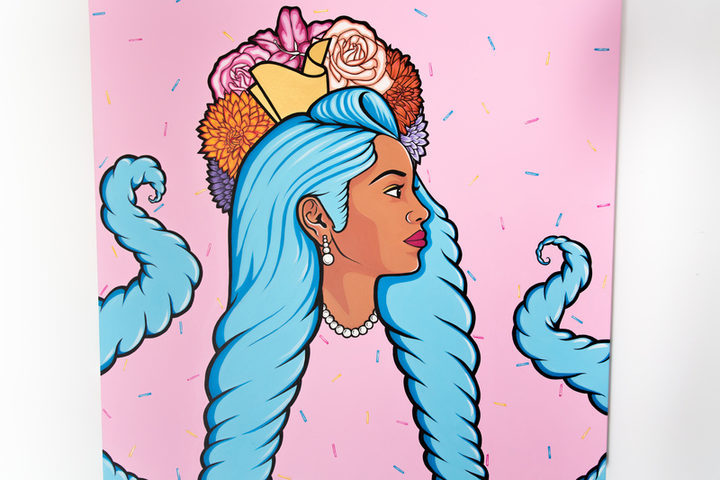 Artwork by Niuafe's cousin hangs in the shop. The woman in the piece is modelled on his sister. Photo / Claire Eastham-Farrelly 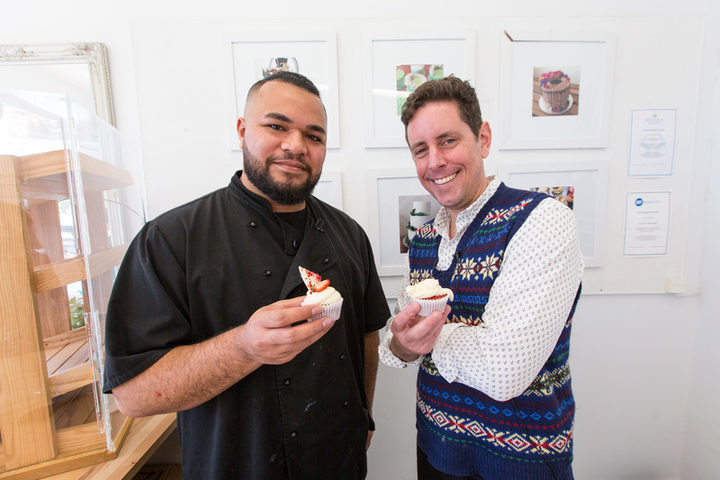 Niuafe, left, with one of his cupcakes and RNZ host Wallace Chapman with his cupcake icing attempt. Photo / Claire Eastham-Farrelly

11:40 Tariq Habibyar: Saffron -  the opiate of the foodies 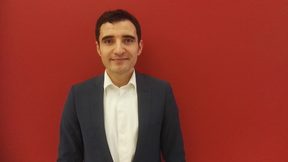 Think of a crop that comes from Afghanistan and is worth thousands of dollars a kilo and chances are opium is what springs to mind. But there's another far less damaging crop that Wellington-based Tariq Habibyar, a refugee from Afghanistan, hopes will bring jobs and prosperity to women in his homeland. He’s launched a crowdfunding campaign to help establish a sustainable, fair trade saffron import business.