Insight asks why there are so few female directors on the boards of the country's listed companies. Women make up almost half the workforce, and received more than 60 percent of the bachelor degrees awarded last year, but make up fewer than 10 per cent of listed company directors.
Written and presented by Naomi Mitchell
Produced by Sue Ingram

Professor Stuart Carr (right) is an organisational psychologist from Massey University, who is taking the lid off unjust salaries for aid workers. In a situation he refers to as "economic apartheid", Carr says people from developed countries can earn 10 times more than a local worker in a developing nation for doing the same job. He tells Chris that dual salaries increase inequality and are divisive and destructive - and that the problem is at its worst in the Pacific nations.
Stuart Carr's book, 'The Aid Triangle', is co-authored with Professors Malcolm MacLachlan and Eilish McAuliffe. It is published by Zed Books.

Are provocative columnists obliged to serve up facts along with their opinions? Mediawatch looks at the case of a couple who used the media to set the record straight after criticism from two prominent commentators. Mediawatch also look at how advertisers are now getting their messages into the media without using old-fashioned adverts; and what the Minister of Broadcasting had to say about the future of public broadcasting at a gathering of film and TV producers this week.
Produced and presented by Colin Peacock and Jeremy Rose.

9:40 Luis Jalandoni - Peace in the Philippines

Luis Jalandoni is the chair of the National Democratic Front of the Philippines negotiating panel for peace talks with the Philippines Government. A couple of the groups under the NDF banner are deemed terrorists by the US, the EU and New Zealand, but Luis tells Chris the Front is struggling against extra-judicial killings, disappearances, torture, and the displacement of millions of peasant farmers at the hands of the Philippines military. He's hoping for peace talks next year - and political will from both sides to bring an end to conflict.
Luis's visit was organised by the Philippines Solidarity Network of Aotearoa. 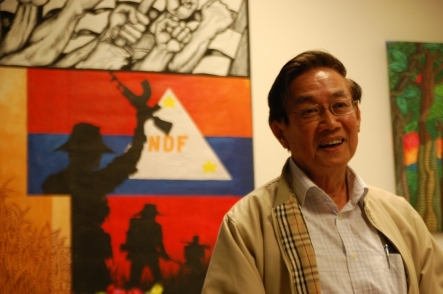 Luis Jalandoni in his office in Utrecht, Holland, in front of a NDF poster.

Former All Black John Kirwan opens up about the story of his depression and how he found hope and recovery. From the outside, it appeared that the star winger had a charmed life. But behind the scenes his anxiety attacks were becoming constant and he forced dark thoughts to the back of his mind. It all caught up with him eventually, and fear and depression swamped his life. But Kirwan's story is also one of hope. He says he hit rock bottom, then reached out to the right people. He tells Chris that his mission now is sharing that recovery with fellow sufferers.

Dougal's been to England where he's been eating quail eggs in the company of Camilla the Duchess of Cornwall. It was all in a good cause - the pair were joined in their support of ShelterBox, which provides humanitarian aid to people displaced by disaster.

This week on Hidden Treasures our host Trevor Reekie features music from a new album by AfroCubism, a collaboration between some of Cuba and Mali's most iconic musicians, as well as a track from the long-awaited new release from Emma Paki.
Produced by Trevor Reekie

More than 42,000 elderly New Zealanders spend time in residential care facilities each year, and another 75,000 receive some form of home support. And the numbers are predicted to skyrocket as the country's population ages. Last week a study was released claiming nearly a quarter of residents in 15 of Wanganui's 17 rest homes were malnourished - just the latest of a number of disturbing stories about the state of the nation's aged care sector. So, are the horror stories being reported by the media simply isolated cases in a very large industry or are they symptomatic of something far more serious? Ideas explores the issue with Geoff Harper, the son of a centenarian who died after catching scabies in a rest home; enrolled nurse Lyn Williams; Dwayne Crombie, the CEO of BUPA, one of New Zealand's largest suppliers of aged care facilities; Rob Haultain of the New Zealand Nurses Organisation; and Green MP Sue Kedgley who recently co-wrote a report on the state of the aged care industry.
Presented by Chris Laidlaw
Produced by Jeremy Rose