Insight this morning assesses the value of attracting big budget movies to New Zealand. The taxpayer subsidy for The Hobbit will amount to around one-hundred million dollars. But just how much economic benefit will the project bring and does shooting films in New Zealand do much to increase the number of tourists here?
Written and presented by Sue Ingram

In nearly 50 years of broadcasting Michael Parkinson has interviewed more than 2,000 of the world's most famous people. His TV talk show lasted four decades and in his new book he reveals the highlights of his career. He tells Chris about some of his favourite interviews, the importance of creating a mood to make guests feel comfortable, and the shallow and breathless state of TV today.
Sir Michael Parkinson's new book is called 'Parky's People' and is published by Hodder & Stoughton. His DVD, 'The Michael Parkinson Collection', is released next week.

Mediawatch looks at what the government's calling the biggest change to the justice system for half a century. Media freedom advocates are warning there's a threat to a fundamental freedom of the press in there. But is there? Could a review of what the Justice Minister calls the "Wild West" of the internet really bring censorship to cyberspace? And could new rules for the 'new media' be a good thing in the long run? And Mediawatch also asks if the media got more excited than the public when news of that royal engagement broke this week.
Produced and presented by Colin Peacock and Jeremy Rose.

Lori Wallach (right) is the director of Public Citizen Global Trade Watch in Washington DC. She says that there's little to be gained for New Zealand in the proposed free trade deal known as the Trans-Pacific Partnership Agreement, arguing that the US agenda has more to do with foreign relations than with trade. She fears the deal will open up New Zealand to foreign companies which will have wide powers to gain land and operate freely in this country - while the benefits to New Zealand will be small.
Lori Wallach's visit to New Zealand marks the release of 'No Ordinary Deal: Unmasking the Trans-Pacific Partnership Free Trade Agreement', edited by Jane Kelsey and published by Bridget Williams Books.

Historian David Filer rates the conflict on Crete as the 'Gallipoli' of the Second World War. Unlike Gallipoli however, where British generals made the mistakes that lead to defeat, on Crete it was the New Zealand commanders who were to blame. Their blunders resulted in the deaths or imprisonment of thousands of New Zealanders and troops from other countries; and for the people of Crete, a four-year brutal occupation.
David Filer's book, 'Crete: Death from the Skies', is published by David Bateman.

This week on Hidden Treasures Trevor Reekie unearths a buried Gospel gem and features a track from one of Morocco's great master musicians.
Produced by Trevor Reekie

The Bank of Real Solutions is a web-based initiative that aims to share the stories of grassroots projects around New Zealand that are helping their communities become more resilient, vibrant, healthier, happier, and better connected. Ideas talks to the website's coordinator, Laurence Boomert; a Whanganui couple whose Stone Soup project, inspired by a fairy tale, is bringing a community together; visits Whanganui's Green Bikes recycling scheme and the nearby Castlecliff conservation project; and hears about Lyttelton's Time Bank and the part it played in helping the town deal with the aftermath of the recent earthquake.
Presented by Chris Laidlaw
Produced by Jeremy Rose

See photos of the projects' participants. 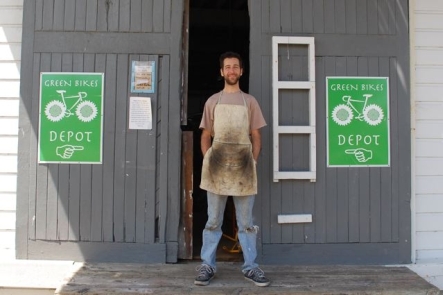