We think of New Zealand literature as matter of fact, no-nonsense, social realism territory.  But beneath the stoic surface we seem to have an extraordinary fantasy life. 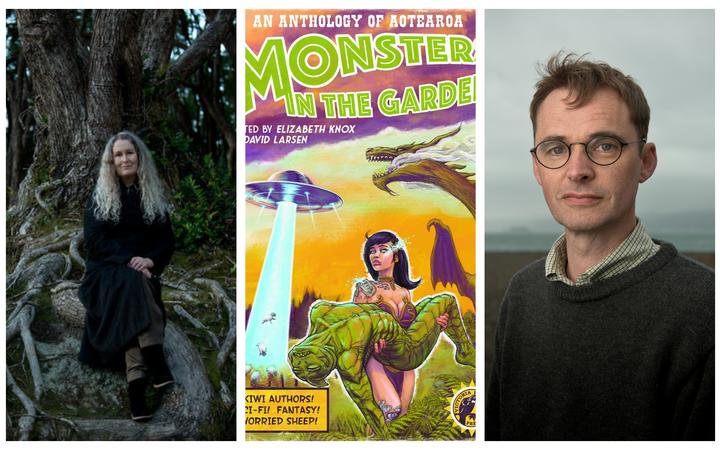 Margaret Mahy, The Vintner's Luck, comic-books and comedy horror films. It took a Kiwi to come up with The Rocky Horror Picture Show, and don't even mention The Lord of the Rings and Narnia movies, all but one directed by New Zealanders.

And now an anthology of home-grown sci-fi, fantasy, genre, speculative fiction has arrived.  It's called Monsters in the Garden. It's co-edited by Elizabeth Knox and David Larsen, with contributions from the cream of our most imaginative writers.

Elizabeth Knox and one of the stellar contributors, Dylan Horrocks speak to Simon Morris about the book.

Horrocks says New Zealand has a long tradition of fantasy written by Pākehā settlers but often in non-traditional formats.

"A lot of our early newspaper comic strips were attempts to create New Zealand fairy stories set in the bush. They combined local flora and fauna with European fairytale traditions but they also fed into it little co-opted elements taken from Māori traditions."

These attempts had not been explored much over the years but provided some fascinating content, he says.

Knox says she has discovered recently that Fergus Hulme, the Australian-New Zealand writer of the first crime novel, The Mystery of a Hansom Cab, apparently wrote a fantasy novel set in Queenstown which she is still looking for.

Knox went looking for "non-realism" examples for the new book. There is work from prominent writers Maurice Gee and Owen Marshall while Horrocks' piece which was first written when he was young was refined.

"One of the things that I loved about it was that behind the sophistication ... there was also this amazing powerful dark youthful energy to do with fear and anxiety and so on, coming from the Dylan in his twenties who'd written it. It was just so good," Knox says.

It is also one of only four fantasy pieces in the book, Knox adds - all the rest are ghost stories or science fiction.

Knox's science fiction piece, Unobtainium, was inspired by a conversation about how to keep the mouth of a wormhole open. It's a term used by physicists and is also used in the movie, Avatar.