Hits and misses from the year in fiction, non-fiction and poetry in Aotearoa 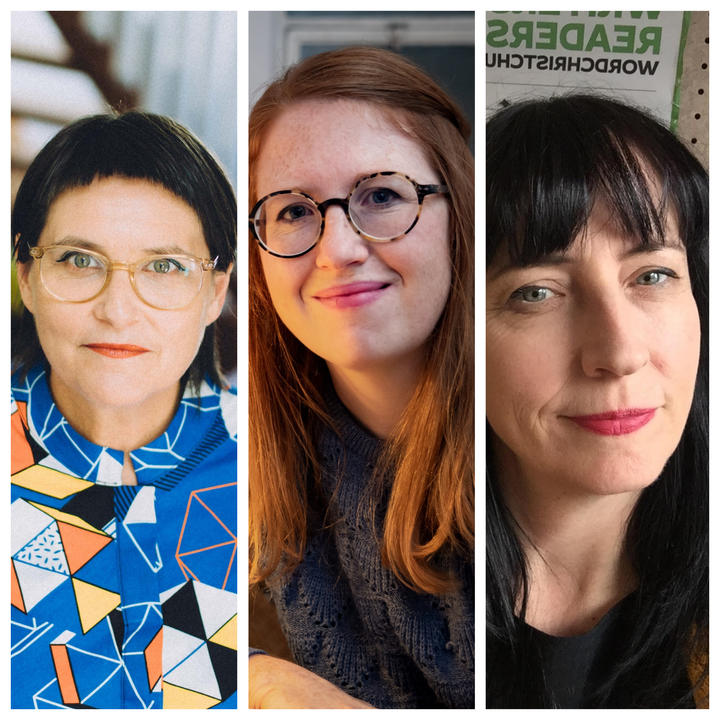 The Booker, The Ockham, Atwood, Knox, The closure of the New Zealand Review of Books, covering up white suprematist posters in Newmarket with Hone Tuwhare's poem 'Rain', and Lloyd Jones' proclaiming the demise of New Zealand book culture after a visit to Christchurch's new library Turanga.

Literature in Aotearoa in 2019 was marked by all these things. Mark Amery is joined by three people whose support of writers and readers deserves applause itself this year. Christchurch novelist, programme director of Word Christchurch, and former bassist Rachael King. One half of dynamic arts production company Pirate and Queen, co-directing Verb Wellington including Litcrawl and curator of next year's New Zealand Festival writers' week Claire Mabey. And novelist, reviewer, podcaster, winner of the Ockham New Zealand Book Award in 2019 and hairdresser Pip Adam.

A book that was a favourite: Pip and Claire might choose Elizabeth Knox's The Absolute Book, so I'll go with Shayne Carter's Dead People I Have Known. A raw, sad and funny as hell memoir that is not just about music but friends, family and loss. As good a depiction of a New Zealand childhood as I've ever read.

Something else in a different media: Meremere by Rodney Bell. The Christchurch Arts Festival made some bold moves in its programming this year, one of which was moving the festival to July, when people like to stay home by the fire. I got to a few things, including the magnificent Wild Dogs Under My Skirt, by Tusiata Avia, directed by Anapela Polata'ivao. I met Rodney Bell when he appeared in our event What a Fool Honesty Is! where I invited five speakers to tell some home truths. He is a truly beautiful human being, and Meremere is a dance/theatre piece that I found utterly enthralling and so moving I was still crying on the way home in the car.

Something that promises much for the future: Tūranga, the new Christchurch central library. Someone bagged it in The Spinoff recently, accusing it of hiding books away as though literature is an embarrassment. When I suggested on Facebook that there is no harm in reinventing what libraries can be, someone said that in Wellington, we don't need to reinvent libraries, so that was me told! I see places like Tūranga as part of the solution, not the problem. Where books can co-exist with technology, where they are warm and welcoming places for everyone. When the UK has closed around 800 libraries, we can be thankful for places like Tūranga stemming the tide of books being completely undervalued.

A key issue that kept coming up in the arts: I would like to see more work by people who aren't Pākehā being, written, published and read.

Your most moving literary encounter: Behrouz Boochani's arrival in Christchurch to a karanga from Ngāi Tūāhuriri, and also his arrival on stage in with John Campbell to a standing ovation from 1300: welcoming, kind-hearted people who don't think refugees should be turned away or stuck away in "processing centres" for six years.

Something that was questionable for you: I'm going to go with the decision to give Margaret Atwood a share of the Booker Prize with Bernardine Evaristo, and while we're at it, the price for the Margeret Atwood live tickets!

A book that was a favourite: Paul Takes the Form of a Mortal Girl. Andrea Lawlor (They/Them)

Something that promises much for the future: I got to read Eamonn Marra's amazing novel 2000ft Above Worry Level and it is awesome!

Something that was questionable for you: The Testament by Margaret Atwood.

A key issue that kept coming up in the arts: Consent - at least in the art I've been consuming. I'm excited by the amount of good sex writing which centres consent. And I'm interested in the growing conversation about consent and art. In particular this article: The Power of the Pussy Bow: Fighting Back Against Rape-Art by Emily Hartley-Skudder.

Your most moving literary encounter: On Earth We're Briefly Gorgeous by Ocean Vuong.

Your most disturbing literary encounter: This is Pleasure by Mary Gaitskill.

A book that was  a favourite: The Old Drift by Namwali Serpell but also... the Sally Lockhart series by Philip Pullman, and also Witch by Rebecca Tamas.

Something else in a different media: I get stuck on music when I'm working and this year I just hammered Talking Heads. I'm a long time fan but I craved them this year, needed them to get me through admin.

I had a really great time at Tiny Ruins in the Khandallah Hall, and also discovered Raukura Turei, visual artist. I adore her work. Loved Nike Savvos' Finale: Bouquet at Te Papa.

Something that promises much for the future: Libraries - their potential. I recently visited the refurbished State Library in Melbourne - bloody stunning, innovative, welcoming, optimistic, generous.

Something that was questionable for you: Booker Prize decision. WTF.

A key issue that kept coming up in the arts: Value. How to talk about value, how to wrestle structures into opening space for value.

Your most moving literary encounter: I cried at a Cheltenham Lit Festival event with two heart surgeons -- one talked about operating on a tiny baby (I had a tiny baby) and how risky and unprecedented the operation was... then asked an audience member to stand up and she was the 20-year-old survivor of that very operation. Brings tears to my eyes.

Your most disturbing literary encounter: I'm disturbed by most of the long-form journalism I choose to read - journalists committed to exposing awful truths about our world.

Other things I couldn't resist adding: Show Ponies at National Poetry Day - one of the best poetry gigs I've ever seen. Also Roxette. RIP and forever soundz. And I have previewed To the Moon by Laurie Anderson -- just astonishingly beautiful and moving and genius. Can't stop thinking about it.