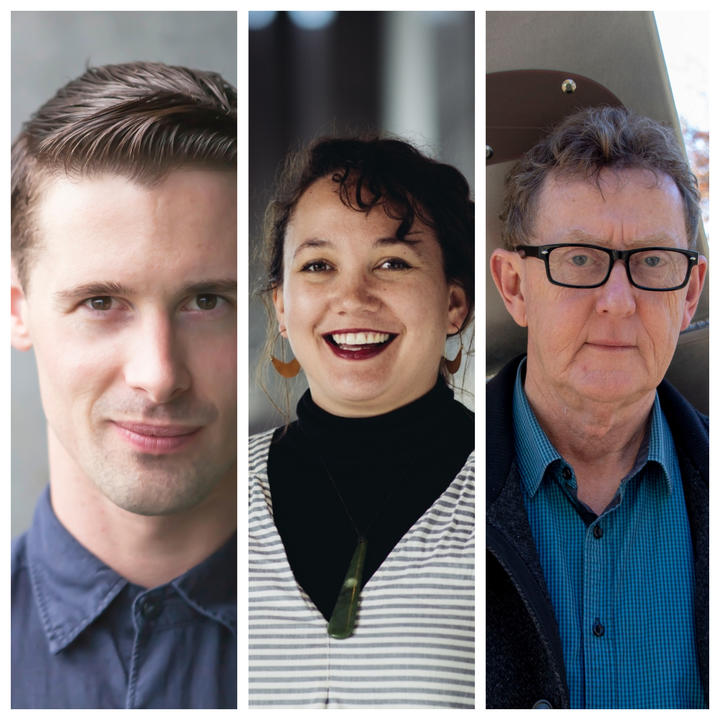 A giant hand called Quasi made world headlines. Dane Mitchell's fake transmitting trees at the Venice Biennale were joined by a real fallen tree during flooding. Giant woven works by the Mata Aho Collective hung in London and Ottawa, and Lisa Reihana's work was simply everywhere. Back home, we gnawed over how to commemorate the visit of Captain Cook 250 years ago, and reopened big files on Modernist artists Schoon, Walters, McCahon, Henderson and Hodgkins.

In the year of Ihumātao, attention to the Manus Island detainees and climate emergency protests, were contemporary artists given enough oxygen?

With Mark to discuss are three outstanding commentators and supporters of the arts. In Christchurch, Warren Feeney, known for his lead roles with newspapers Artbeat and The Press, Pantograph Punch critic and a curator at this year's Auckland Art Fair Francis McWhannell, and Curator of Matauranga Maori at Te Papa and coeditor of a new journal of Maori art ATE, Matariki Williams.

Something that was a favourite: Māori Moving Image

Something that promises much for the future: Ruth Buchanan's show at the Govett-Brewster due to its artist-led interpretation of a collection, something that was also explored through Tuia 250-related exhibition Tākiri. Working in an inter-disciplinary institution, this is something I'm very interested in as, despite the supposed inter-disciplinary nature of the museum, we do tend to default to silos and I'm all for exploring ways to disrupt these.

Something that was questionable: Further loss of arts courses in our tertiary institutions, including jewellery at Te Auaha, and the creative writing course at Whitireia. I'm not going to pretend to be an expert in this area but it does raise some concerns, and potential opportunities. I think in the climate of further squeezes on humanities courses, it's worth talking about.

A key issue that kept coming up in the arts: I'm interested in the conversation around the term "Moana" as a means of describing Te Moana nui a Kiwa as a region as for artists who whakapapa to that region. The term was used in the recently released Crafting Aotearoa, has been used in multiple reviews, I've seen it in use in Auckland Art Gallery etc so it's not a one-off thing. It does however appear to be used predominantly in Auckland rather than here in Wellington. Obviously I look at this from a Māori perspective and wonder whether or not this term is meant to include Māori, especially when the conversation appears to be located here in Aotearoa. Further consideration came from the recent journal from Pouhere Kōrero (Māori historians association) which included an article that looks at Māori from coastal iwi as tāngata moana. These are some of my whakaaro before even considering that the term excludes cultures where moana is not part of their language.

Your most moving encounter: I have two, both of which involve my father. First would be the Adam Art Gallery exhibition Te Taniwha: The Manuscript of Ārikirangi. Ngā kupu whakamahuki nā Richard Niania, photographs by Joyce Campbell. I attended a talk with my dad and two siblings that Richard chaired, it was really enlightening about the way in which knowledge is passed on through whakapapa and the seeking validation via external researchers. The second was the Tame Iti and Billy Apple experience in Rūātoki both at the confiscation line and then at Te Rewarewa marae (which I whakapapa to). This was an event I attended that was coloured/ broadened/ deepened through my experience of spending so much time with my dad and hearing Tūhoe kōrero and history.

Something that was favourite: I've two favourite shows this year, both of which took place outside Tāmaki Makaurau: Owen Connors' SISSYMANCY! at play_station in Te Whanganui-a-Tara, and Fiona Clark's Raw Material at the Govett-Brewster Art Gallery in Taranaki. Both made manifest the communities into which we all fold, and celebrated queerness or camp with delicious texture and flair.

Something that promises much for the future: Someone, not something, which I hope is okay! I have my eye squarely on Areez Katki. He has turned out a host of remarkable shows this year, and some excellent writing to boot. Some Retained Delights at RM was especially full of delight, centring on a series of embroideries on found handkerchiefs made during a residency in Athens, a visit to Rome, and a return to his hometown, Mumbai. The installation was pure poetry, with the squares of cloth suspended about the room as if picked up by a breeze and somehow frozen mid-flight.

Something that was questionable for you: I got all excited recently when I visited Sorawit Songsataya's excellent installation, The Interior, at Auckland Art Gallery Toi o Tāmaki - my big local, for which I feel great fondness. Of late, the institution has been a mite patchy in its coverage of contemporary Aotearoa artists, especially younger ones, and Songsataya's presentation gave me real hope. Shortly afterwards, though, came the announcement of the Gallery's programme for 2020. The emphasis was on five international exhibitions, including one focussing on Picasso and one on Monet. An international photography show, which I gather is to include some local work too, is more promising. But, overall, the schedule - the first under the Gallery's new director - feels safe, uninspiring. We'll have to hope that the updated collection hangs and regular features, like the Chartwell and Walters Prize shows, deliver a bit more bang.

A key issue that kept coming up in the arts: I'll go positive here! Collaboration and cooperation. The 'issue' was explored in numerous exhibitions in Aotearoa, especially those centring on Moana/Pacific (including Māori; *waves at Matariki*) artists, such as names held in our mouths, curated by the divine Ioana Gordon-Smith at Te Uru Waitākere Contemporary Gallery. It was embodied by collectives like Mata Aho (and in their woven and sewn-together works, shown here and internationally). It cropped up at the Turner Prize, in one of the more heart-warming moments of the year. In a world that is in various ways falling apart, the diminution of the individual and playing up of the collective in the 'art space' feels like a meaningful-if relatively subtle-act of resistance.

Your most moving art encounter: Another out-of-Auckland situation! Ayesha Green's Elizabeth the First at Millers O'Brien in Te Whanganui-a-Tara. I knew this would be an exciting show, having written a mini-profile for Art Collector in Australia. But the experience in the gallery was something else altogether. Again and again, Ayesha creates powerful reflections on the complex stories (past and present) of Aotearoa. I was especially taken with her 'Mea': a collection of leafy ceramic speech bubbles incised with the names of trees in te reo Māori. These were most poignant viewed alongside paintings evocative of florilegia. The indigenous with the colonial. The oral with the printed. The earthy with the detached. It all worked brilliantly, gladdening my heart even as it provoked a wee weep.

Your most disturbing art encounter: Visiting Gordon Walters: New Vision at Te Papa Tongarewa and Split Level View Finder: Theo Schoon and New Zealand Art at City Gallery Wellington Te Whare Toi on the same day. A pair of shows about a pair of frenemies, and of course the most famous 'appropriators' of aspects of Māori art. Each show had its strong points. New Vision was exquisitely refined, underscoring the coherence of Walters' vision (if not always its 'newness'). Split Level View Finder made a laudably serious attempt to contextualise Schoon, giving prominence to Māori artists and elevating the work of Rolfe Hattaway. However, a most uncomfortable duo, especially in a year that was even heavier than usual on big retrospectives focussing on Pākehā artists. Let's hope 2020 brings fewer of those ...

Something that was a favourite: Māori Moving Image: An Open Archive. A survey exhibition covering 40 years of film and video by contemporary Māori artists, it was a revelation, greater than the sum of its impressive parts. (It's currently on at Christchurch Art Gallery)

Something that promises much for the future: Exchange Christchurch, a post-quake artist's studios and creative space in Waltham, Christchurch. In 2020 it plans to purchase a central city building, relocating to bring "design, fashion, performance, visual arts and various creative practices together with accommodation and hospitality."

Something that was questionable: Central government's vision for an Art Bridge across the Avon River, saw 13 artists shortlisted, but was canned when annual maintenance costs anticipated by City Council saw Ōtākaro confirm that, as an alternative, the "art bridge" would be a concrete slab with hand rails. Never assume that the arts are a profession or discipline respected by the wider community or central and local government.

A key issue that kept coming up in the arts: "the artist interrogates…"  I do not know how many times I read this phrase in exhibition catalogues and reviews throughout 2019. It was doing the rounds, generally over stating the idea that art can make a difference.

Your most moving encounter: Matthew Gallaway's The Freedom of the Immigrant. Opening at the Physics Room in Christchurch a month after the 15 March, Gallaway's exhibition reconsidered Sir John Key's 2016 presentation to the Auckland business community that a terrorist attack in Europe would benefit New Zealand, making our country more attractive to high net-worth consumers. Proved that art can make a difference