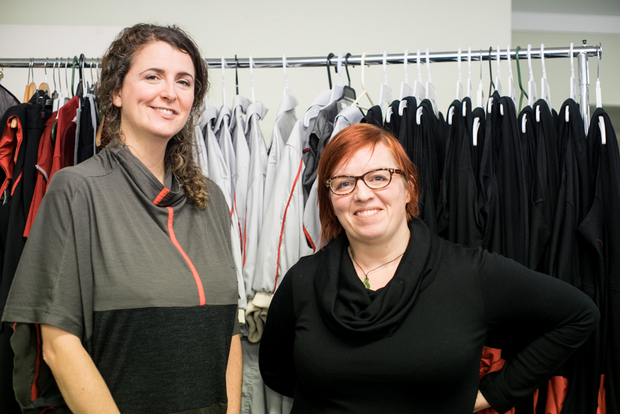 “Fifteen percent of all fabric is disposed of [and] it could wrap the whole state of California.”

What does it take to make a wholly sustainable garment in an industry where fast turn-around fashion and mass production is King?

The allure of cheap clothing and throw away fashion has led to a massive amount of waste, from the excess fabric that is discarded during the manufacturing process, through to the unwanted items that are simply thrown away by consumers in a trend-driven society where chasing the new has become the ultimate goal. 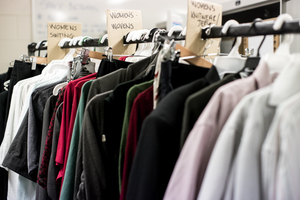 Uniforms ready for reconstruction at Space Between. Photo: Sonia Sly

Jennifer Whitty, Senior Lecturer for Fashion Design at Massey University and Project Lead for Space Between, says there would be a media storm if word got out about the huge amounts of pre-waste material that is ending up in landfill.

“Fifteen percent of all fabric is disposed of [and] my colleague Holly McQuillan has worked out [that] it could wrap the whole state of California.”

An important way forward, she says, is to address waste streams and re-manufacturing techniques to develop systems to work with post-consumer waste and pre-consumer waste, the latter, being the excess that every garment manufacturing company creates.

Space Between has been in development for the past two and a half years: an initiative that looks at redressing the balance between designer and the consumer to create a process that is wholly sustainable with a zero waste policy. It goes beyond turning to organic cotton, a process that uses  2,720  litres of water to make one T-shirt. That's equal to the amount of water we consume over a three-year period.

Space Between have been working in conjunction with Earthlink and New Zealand Post as a means of creating alternative approaches to the design and manufacturing process. Designers work with discontinued company uniforms to create fashion-ready garments that appeal to a  style conscious and eco-conscious consumer.

For each style of garment the process is entirely transparent, with time and labour recorded.

Operations Manager, Patricia Given, says that they have chosen to produce on-demand, which ultimately affects cost. “Traditionally garments will be cut out of twenty layers of fabric, [but] we can’t cut out more than one garment with quality control issues.”

Creating on-demand also means there won't be left-over garments once production has been completed.

Producing a new garment out of an existing item of clothing—rather than a roll of fabric—comes with plenty of challenges. All items have to be laundered and sorted; company logos need to be removed and it’s up to the discretion of the designer as to whether they incorporate visible signs of wear into the newly imagined designs. 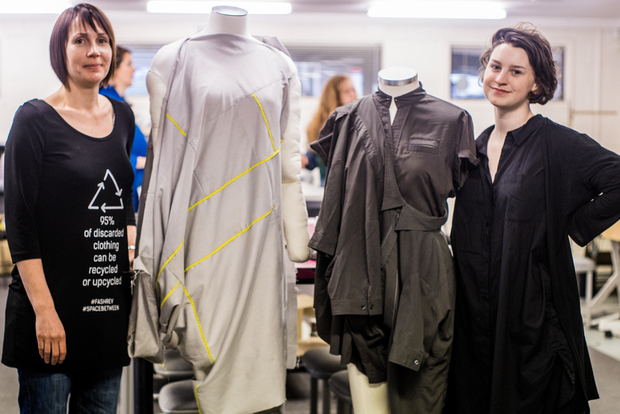 It may not be a process that appeals to all consumers or designers, but it’s a means of re-education; contributing towards change and implementing measures that save on waste.

Designer, Annie Bretherton, joined Space Between as an external designer. She felt that this was the only way she could see herself realistically developing her own label—one that has to be sustainably focussed.

“A lot of fast fashion isn’t very customer focussed [and] it’s about making a profit, whereas it would be nice if we could take fashion back and make it more relevant for individuals,” she says.

With designers moving towards alternative approaches to design, Jennifer Whitty is positive about Space Between and the impact it will have on the future of fashion and the growth of sustainable practice that veers well away from the fast-fashion model and the cheap cost of clothing.

"I think that bubble will burst in the very near future,” she says.

Head to Space Between to find out more.

Listen to the audio story where Sonia Sly speaks to the designers and team behind Space Between who reveal the challenges of working with pre-worn items and the reality behind the true cost of clothing.