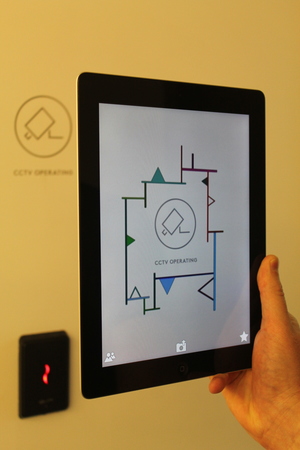 Artist Shannon Novak makes music for buildings.  And signs. And locations. And people.

He says there is music in everything and to prove it he has created sound and abstract images in response to the signage and architecture of Auckland’s Te Uru Waitakere Contemporary Gallery.

These compositions and images are attached to signs for the elevator, floor tiles, symbols for fire extinguishers and the like – ten everyday objects reframed as art and augmenting the reality we experience around us. But there’s a catch; for the majority of the galleries visitors these works are silent and invisible unless viewed using a digital device and a downloadable app. The exhibition is called Cryptocosmos and is hung - virtually - inside Te Uru and next door in Lopdell House and has begun to spread out into Titirangi village. These smaller works sprang from a much bigger plan.

“I wanted to create work over the Skytower. Logistically, it’s a nightmare. You could do things like projection but even that’s quite a considerable cost. So this technology – use of devices and augmented reality – is the answer.”

Andrew Clifford is the director of Te Uru Waitakere Contemporary Gallery and he commissioned the Cryptocosmos exhibition. He says Shannon is lucky to be alive at a time when digital technology makes merging art with objects a whole lot easier. 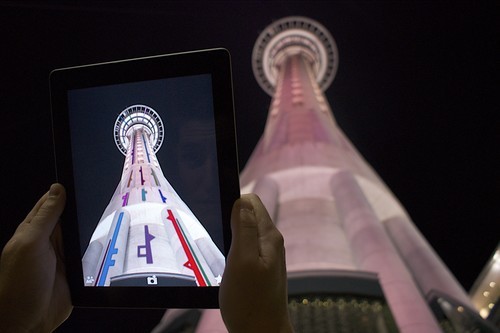 “Whereas once you had two quite different things now they’re both aspects of electronic media. You open up your laptop and you make sound and it shows you stuff and it all happens simultaneously. So the two have definitely been brought together.” What separates Shannon from some other artists is the way his work originates. He only makes them after first experiencing them. 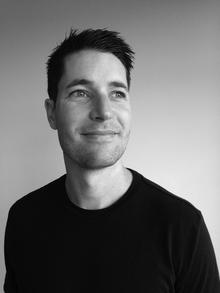 Curiously, while most artworks develop during the process of being made, Shannon aims to be as faithful as he can to that initial experience - the exact shape, shade of colour and the musical sequence he originally imagined. And while the abstract images are often likened to the films of Len Lye or the paintings of Kandinsky or Mondrian, Shannon credits an early Philip Glass animation he saw as a child while watching Sesame Street.

“It was a really abstract animation where a whole lot of circles in different colours appeared and it was accompanied by voices. So there was that intersection between music, shape and colour.”

Contained within the title Cryptocosmos is the idea of an orderly, harmonious system and Shannon says he often places one work in an exhibition as a kind of sun around which others radiate. He’s begun to spread the works out into the Titirangi village and will continue to add works as he feels them and as he is able to. While Shannon mostly exhibits and sells his works overseas he is hopeful of making more of a mark here in New Zealand. His work is mostly commissioned by galleries and while he acknowledges the difficulties of selling and owning virtual art works he imagines a future where people select a mixed augmented reality to belong to which contains any amount of images and information. In a sense Shannon Novak has secured the artists’ grail – an exhibition that continues to grow, will never be taken down and is unaffected by any works hung over it by other artists. Kandinsky, Mondrian, Glass and Lye would be proud – and possibly a little envious.