To be a married couple who are also both artists is to constantly skip between the everyday and the ephemeral. Choreographer Louise Potiki Bryant and musician Paddy Free know that better than most and have put that line between the divine and the mundane at the heart of their new work, In Transit, one of three dances in Lumina, the New Zealand Dance Company’s upcoming season of new works. Justin Gregory goes to Louise and Paddy’s home to meet them and to talk about how you do art while also doing the dishes. You can talk about really deep ideas but you still have to take the trash out.

Art can come from some odd places. It was a broken clothes dryer and the awful sound it would make when turned on that provided the musical inspiration for In Transit. How does a dryer inspire a dance soundtrack? Let Louise tell you.

"We had to get rid of (our) dryer because it died. It had a really good clunky sound and that's probably why it did die."

"It was making these groaning noises, along with smoke..." adds Paddy.

"So I got Paddy to record the dryer.."

"...and then I processed it, put it through a bunch of algorithms that repitched it randomly...and that's formed the backbone of the soundtrack." 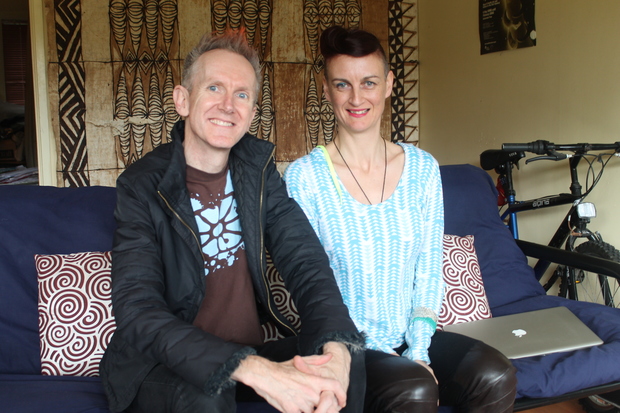 Mundane – common, ordinary, banal or unimaginative. Not really words you can apply to people who find music in broken household appliances. Mundane can also means a focus on worldly issues  rather than heavenly ones. And it was in one of the most earthbound –and most mundane - of all places that the inspiration for this show first struck Louise.

I was sitting in an airport in Singapore and just thinking about being in transit, between time zones and I started to think about how life could be seen as a continuous series of transitions. Louise argues that within certain cultural practices there is always transition from one state to another; through the ritual of powhiri, manuhiri become tangata whenua. But within any ritual there is also a midpoint of being neither one thing nor the other, a liminal state of ambiguity before the transition is complete. Louise points out that Te Kore, the Maori concept of the void or of a world beyond this one, is also a place of potential, where non-being can become being.

"When you double up the idea of Te Korekore it (is) so nothing that it becomes something. I find it quite easy myself as a dancer to work in that in-between space." But Louise is not working by herself. She has a team of dancers and, maybe more to the point, a husband to collaborate with. When your working life so obviously overlaps with your home life, do you need to put any kind of rules in place to make sure it all balances out? No, apparently. It’s that mix of the divine and the mundane again. Louise says that while the couple set aside time in their working day to collaborate and plan, it is often when they are engaged in ordinary, everyday tasks like doing the dishes that ideas spring up. But do they feel a need to please or impress each other with the quality of their work and ideas? Both say yes.

"We ask each other what..."begins Paddy.

"I value Paddy's opinion very highly," interrupts Louise, hilariously. "He's very honest, and sometimes I can take that a bit personally. But I like that he's honest and he'll give me the most critical opinion out of anyone."

Is that an easy thing for Paddy to do? He splutters a bit then responds.

"Sometimes, sometimes not. If I love something or if I've got reservations and I dance around the subject Lou can always tell. It cuts both ways. We're usually pretty good. Even if we can just say what's not happening yet without knowing how to fix the problem or what direction we want to move off into.'

Or not move at all. The interesting problem in this work for Paddy as both composer and audio visual designer is to try to represent that moment of not moving, of being stuck. Because that’s not really how music works.

"Music is always about a journey from A to B. You start at one state and you end at another state. This one is actually a bit different because perhaps we are allowed to just hover a bit in limbo-land. That's a challenge for me because I'm usually wanting to deliver,deliver, deliver."

I think it's about choosing the rate of the pace of change. (Music) puts your mind in a state of setting up expectation and then surprising you. And it's when you get the correct balance of expectation and surprise that music is good. The provocation for the overall Lumina season of works is to be at the intersection of contemporary light, sound and movement. It’s been a year since Louise and Paddy were last in a rehearsal room working with the New Zealand Dance Company and very soon they’ll go back there to see if they are still at that intersection. Louise is completely comfortable with the idea that they may not be; that the show may have traveled a bit from where it began. So is Paddy.

It's removing the blemishes until what you're left with doesn't offend in any way. When I'm listening to a piece that I'm working on, if it carries me away, beginning to end, and my conscious mind isn't engaged at any point, then I know the piece is finished.

So it seems like a year of dreaming over the dishes has seen the show move but not depart from its starting point. Hopefully all Louise and Paddy have to do now is tidy up the transit lounge before everyone arrives.