Standing Room Only for Sunday 6 July 2014

Two years ago artist Kalisolaite ‘Uhila outraged Pakuranga by living as a homeless person outside Te Tuhi Gallery. He wore a black face mask, slept rough, ate only donated food, was spat at and had the police called to remove him. That two-week work about prejudice has been named as a finalist in the Walters Art Prize for 2014  and ‘Uhila will recreate the performance outside the Auckland Art Gallery. But this time he’ll do it for three months. In the dead of winter.

Lyttelton singer-songwriter Adam McGrath talks about sdongwriting, free concerts after the Christchurch earthquakes, and lending his song – and its title – to TV mini-series Hope and Wire.

Simon Morris looks at Taika Waititi’s much-anticipated, What We Do In The Shadows, as well as France’s most successful comedy in years, The Volcano and two smaller American films, The Face Of Love and Any Day Now.

Living on house boats and travelling extensively to India, Panama, Tahiti and Japan in search of precious gems…this was the childhood of Zoe, Morgan and Ruth Sibbald— the siblings behind international jewellery brand Zoe & Morgan. Established in London by Zoe and her brother Morgan ten years ago, the brand quickly caught the attention of high-end department stores in Europe after winning a spot at Paris Fashion week. Settling back in her home town of Auckland a few years ago, Zoe works out of a stylish retail studio space based at The City Works Depot. The siblings are based in different parts of the world and production is spread across Bali, New Zealand, Thailand and England.

In her monthly dip into the TV archives, Irene Gardiner celebrates the anniversary of one of our more significant political events – the 1984 General Election.

Guests on the Laugh Track are the publicists for Taika Waititi’s hit movie What we do in the shadows, Chris Henry and Anna Dean – both fans of New Zealand web-series.

What’s the worst sin you’ve ever committed? The Outfit Theatre Company of Auckland want to know and then want to put your shame up on the stage. Their new devised show, called Sin, is based on dozens of interviews, online surveys and anonymous offerings from the public. Director Sarah Graham talks about how they got their interviewees to open up.

Author Sarah Quigley has just published a new collection of short stories. Called Tenderness, the stories are linked by themes of love and intimacy as well as friendship and yes, tenderness. It’s a change of pace for Sarah whose 2011 novel, The Conductor, told the story of the premiere of Shostakovich’s Seventh Symphony during the Siege of Stalingrad. Justin Gregory asked her if, after finishing The Conductor, she was in need of some tenderness herself.

Sixty years have passed since founder Alma Woods advertised in the paper for folks interested in forming an amateur company. Justin Gregory went out to the Howick Little Theatre in East Auckland earlier this week to meet some longstanding members and find out how they’ve survived for so long. He asked who had been there the longest. Sheila Parks put up her hand. 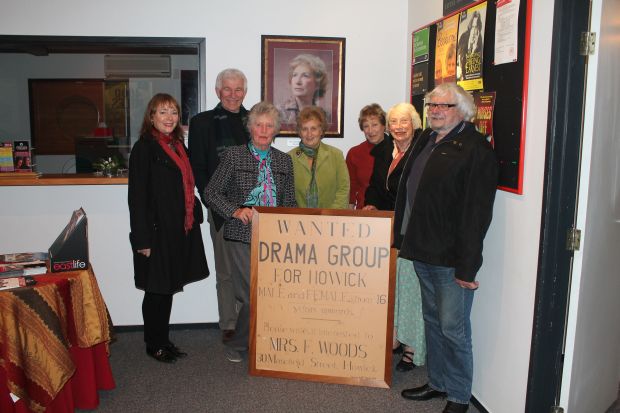