Saturday Morning for Saturday 23 May 2015

Rob Edwards is a journalist for the Sunday Herald in Edinburgh. He broke the story about the claims by Royal Navy whistleblower William McNeilly about the security and safety of the Trident nuclear programme.

Mary Norris has been working at The New Yorker since 1978, and has been a query proofreader at the magazine since 1993. She has written widely for the magazine, and is best known for her pieces on pencils and punctuation. Her first book is Between You and Me: Confessions of a Comma Queen (Text Publishing). To discuss this interview visit our forum. 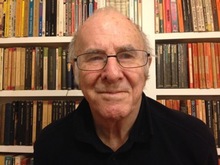 Clive James, CBE, Officer of the Order of Australia, is a writer and television presenter. He is the author of more than forty books, which include essays, criticism, travel writing, translations, novels, autobiography and poetry. He also writes songs (with Pete Atkin), and his latest collection of poetry is Sentenced to Life (Picador).
Photo: Claerwen James

Dr Liana Machado is a professor at the Department of Psychology, University of Otago. She specialises in researching the underlying mechanisms of the brain and how those mechanisms can be degraded by disease and aging. Recently she studied the benefits of exercise for brain function, and is currently investigating whether electrification of the brain can accelerate learning.

Marianne Elliott is the National Director of ActionStation, and La Directora at the Mexican restaurant La Boca Loca in Wellington. As a human rights lawyer, she worked for the United Nations in Afghanistan, and wrote about her experiences in the 2012 memoir, Zen Under Fire (Penguin). With her partner Lucas Putnam and Nicola Edmonds, she has written La Boca Loca: Collected Recipes from the Taqueria (La Boca Loca), which won two awards this month for their printer at the Pride in Print Awards. She will speak at the TEDxWellingtonWomen event on 30 May. Other programmes on Radio New Zealand featuring Marianne Elliott include Afghanistan Stories, Spectrum, and Nine to Noon.

Chef and writer Jennifer McLagan worked in London, Paris, and her native Australia, and has lived in Toronto for 35 years. Her books include Cooking on the Bone: Recipes, History and Lore (2005), Fat: an Appreciation of a Misunderstood Ingredient (2008), and Odd Bits: How to Cook the Rest of the Animal (2011) and she has been interviewed on Saturday Morning about Fat and Odd Bits. Her new book is Bitter: A Taste of the World’s Most Dangerous Flavour, with Recipes (Quarto).

Kate Camp has published five collections of poems, most recently Snow White’s Coffin (VUP). She will discuss One Hundred Years of Solitude, the 1967 novel by Colombian author Gabriel García Márquez.

Artist: Larry Norman
Song:  Why Should the Devil Have All the Good Music
Album: Only Visiting This Planet
Label: Verve, 1972
Broadcast: 10:30

Artist: The Jam
Song:  The Bitterest Pill (I Ever Had to Swallow)
Album: The 1982 single, from the compilation Snap!
Label: Polydor
Broadcast: 11:40