Emma Marris is an environmental writer and reporter for a number of publications, and author of the 2011 book, Rambunctious Garden: Saving Nature in a Post-Wild World (Bloomsbury USA, ISBN: 9781608194544). She wrote the article, Beyond Food and Evil: Nature and Haute Cuisine After the Chez Panisse Revolution, for the Spring 2014 issue of The Breakthrough, and is currently seeking backing for her project on wild wolves in the 21st century.

Adura Onashile is the performer and co-creator (with the Scottish performance company, Iron-Oxide) of HeLa, a solo show about Henrietta Lacks, a Baltimore woman whose cancer cell sample, taken without her permission by Johns Hopkins Hospital, was used as the raw material for some of the most important scientific discoveries of the past 100 years. Performed earlier this month in Christchurch as part of art-science symposium Breaking Ice, and in Wellington at the Otago School of Medicine, HeLa will also play at Q Theatre, Auckland (21-25 October). (The play is based on the book, The Immortal Life, by Rebecca Skloot.)

Dr Justin O’Sullivan is senior research fellow at the Liggins Institute, University of Auckland. His work at Gravida, an inter-institutional, inter-disciplinary virtual research network, and one of New Zealand's seven Centres of Research Excellence, involves new discoveries about cellular organisation and the unique role mitochondria play in the way cells work.

Dr Justin O’Sullivan explains the ‘folding’ of DNA inside a cell nucleus in this video.

Arthur Tompkins is a District Court Judge, and member of Interpol’s DNA Monitoring Expert Group, who has a special interest in crimes involving artistic masterpieces. He will discuss the 1998 theft from the Auckland Art Gallery of Still on Top, the 19th century painting by James Tissot. 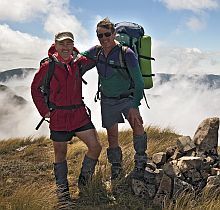 Shaun Barnett edits the Federated Mountain Clubs’ Bulletin, has been a full-time photographer and writer since 1996, and has written a number of books on tramping. Chris Maclean is an historian with an interest in outdoor themes, and has written books about John Pascoe, the Tararua Ranges and Kapiti Island. Both are long-time trampers, and have joined forces to create the new, illustrated book, Tramping: A New Zealand History (Craig Potton Publishing, ISBN: 9781927213230).

You can see images from the book in this online gallery.

Damian Skinner is an art historian and curator of Applied Art and Design at the Auckland War Memorial Museum, and author of a number of books, most recently Place and Adornment: a History of Contemporary Jewellery in Australia and New Zealand (Bateman, ISBN: 978-1869538200) with Kevin Murray, and Fingers: Jewellery for Aotearoa New Zealand, with Finn McCahon Jones (Bateman, ISBN: 978-1869538620). The latter book informs a retrospective exhibition celebrating the 40th anniversary of Fingers Jewellery Gallery (Objectspace, Auckland, 7 November to 20 December). You can see images from the books in this online gallery.

David Haywood has a Ph.D. in engineering and lives in Dunsandel. He writes the Southerly blog for Public Address, and is the author of the collection of humorous essays My First Stabbing, the children’s book The Hidden Talent of Albert Otter, and The New Zealand Reserve Bank Annual 2010 (all publicaddressbooks.com). He will discuss solar photovoltaic energy.

Bob Dylan: I Threw It All Away
From the 1969 album: Nashville Skyline
(Columbia)
Played at around 10:40

The Eels: To Lick Your Boots
From the 2005 album: Blinking Lights and Other Revelations
(Vagrant)
Played at around 11:10