Our Saturday Morning colleague, recording engineer Ian Gordon, who regularly looked after the Auckland end of our live programme, passed away unexpectedly this past week. You can read about him on this tribute page.

Australian author, screenwriter and journalist Helen Garner is known for her novels (Monkey Grip, The Children's Bach, The Spare Room) and non-fiction works, the latest of which is This House of Grief: The Story of a Murder Trial (Text, ISBN: 9781922079206), in which she followed the case of murder accused Robert Farquharson for eight years through the courts. (Kim spoke to Helen Garner previously in 2008.)

Architectural writer and commentator Reed Kroloff is a principal at jones | kroloff. He is a former editor-in-chief of Architecture magazine, and director of the Cranbrook Academy of Art in Detroit, and was Dean of Architecture at Tulane University in New Orleans when the city was struck by Hurricane Katrina. He will visit New Zealand for the WORD Christchurch Writers Festival (27-31 August) to appear at PechaKucha Night, and to give the talk, Lessons from Adversity: Life in New Orleans and Detroit (30 August)

Dr Davinia Caddy is a senior lecturer at Auckland University’s School of Music, a flautist, and the author of How to Hear Classical Music. She will give the talk Classical Notes at the WORD Christchurch Writers Festival on 29 August. Today she discusses symphonies. 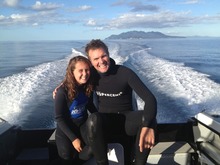 Steve Hathaway is an underwater filmmaker based north of Auckland, whose passionate advocacy for New Zealand’s oceans and sea life is expressed through his 93% initiative. Steve helped his daughter Riley create the Young Ocean Explorers television series, and they have just launched a Kickstarter appeal to raise money to put a DVD of the series and accompanying book into every school in New Zealand. (Kim spoke to Steve Hathaway earlier this year.)

South African artist William Kentridge has been acclaimed worldwide for his combinations of cinema, theatre, drawing, sculpture and music. His five-screen machine-powered installation, The Refusal of Time, will be exhibited at City Gallery, Wellington (6 September to 16 November). You can view images of this work in this gallery, or watch these videos:

David Haywood has a Ph.D. in engineering and lives in Dunsandel. He writes the Southerly blog for Public Address, and is the author of the collection of humorous essays My First Stabbing, the children’s book The Hidden Talent of Albert Otter, and The New Zealand Reserve Bank Annual 2010 (all publicaddressbooks.com). He will discuss wave energy.

Demi Lovato: Give Your Heart a Break
From the 2011 album: Unbroken
(Hollywood)
Played at around 10:20

Brooke Fraser: Saving the World
From the 2003 album: What To Do With Daylight
(Columbia)
Played at around 10:40